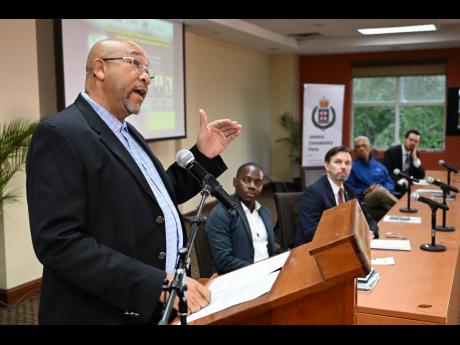 Gladstone Taylor/Multimedia Photo Editor
Balford Lewis (left), associate professor in the Faculty of Liberal Studies at the University of Technology, addresses public attitudes about crime and security in an AmericasBarometer forum at The University of the West Indies Regional Headquarters in St Andrew on Wednesday. 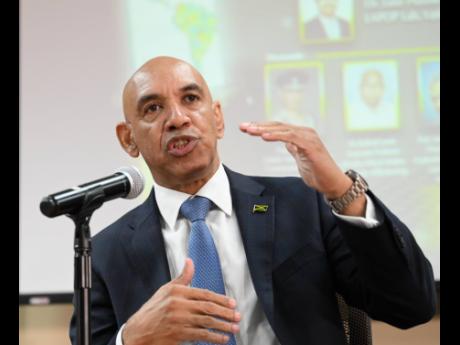 Gladstone Taylor/Multimedia Photo Editor
Commissioner of Police Antony Anderson: “If we are putting persons away, what happens to them over that period? Because when they come out, obviously, you don’t want them to get back to their old ways.”
1
2

Eight in every 10 Jamaicans believe that closer police-community relations can help to reduce crime, the latest findings of The AmericasBarometer have revealed.

The AmericasBarometer is a regional survey carried out by the Latin American Public Opinion Project (LAPOP) Lab based at Vanderbilt University and funded principally by USAID.

The study also found that there is a desire for stronger police-community relations, with 62 per cent of Jamaicans expressing a willingness to work with the police to help reduce crime.

Those willing to work with the police are chiefly older, male, less educated, and from the county of Surrey.

Research fellow at the Centre for Leadership and Governance at The University of the West Indies, Balford Lewis, reasoned that although the study reveals that level of commitment, communities are not participating in activities aimed at reducing crime to a great extent.

“It is all about the trust factor. People are not trusting of the police. We have two different types of trust – interpersonal, where people in the community trust each other, and in that regard, also trust the police; and then, institutional trust, which is the level of the national police. Over the years, the police have been in the same category as politicians in terms of level of trust,” he said during a forum discussing the findings on Wednesday.

Only one in three Jamaicans remains trusting of the police, and since 2006, when Jamaica began participating in the study, police trust has remained below 50 per cent, with the lowest being 20 per cent in 2010.

“If we want better working relationships with the police, we need to find ways of improving trust. It is not necessarily through more contact because what we have seen is that the army, the Jamaica Defence Force, has enjoyed higher levels of trust over the years, and there are now concerns – given the fact that they are now on the streets so often, getting involved in hard policing, getting involved in paramilitary police approach – that over time, their trust level is gonna fall also,” Lewis argued.

The report noted that one source of distrust among the public towards the police and the judicial system was broadly linked to how Jamaicans perceive the treatment of criminals.

Sixty-seven per cent of Jamaicans strongly agree that punishment for crimes should be more severe to deter crimes.

“I agree that we are actually quite soft on it, but the answer is a little more complex ... than just changing one aspect of it, which is making the laws stronger. We have issues like recidivism. If we are putting persons away, what happens to them over that period? Because when they come out, obviously, you don’t want them to get back to their old ways,” Police Commissioner Major General Antony Anderson said, adding that the country’s recidivism rate is about 42 per cent.

He explained that year on year, more than 500 people commit a crime more violent than the ones they committed before.

“We have not spent a lot on the prison system, and I suspect the reason why we haven’t is because the view of the prison system is consistent with the same view that we must punish harder,” Anderson said.

The commissioner added that while the correctional system does not fall under the remit of the Jamaica Constabulary Force, they have raised recidivism as a concern, noting that rehabilitation programmes can result in a significant drop in the numbers.

LAPOP conducted some 3,000 telephone interviews between May and July 2021.

Participants were contacted by a call centre via random-digit dialling.