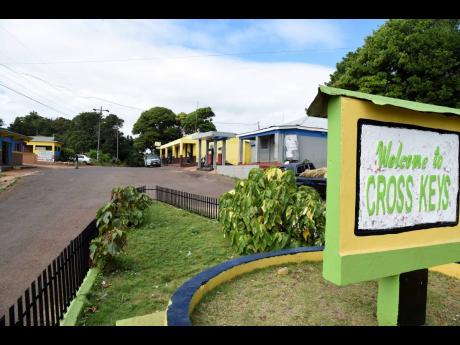 Ian Allen/Photographer
The Cross Keys square in south Manchester, where a series of robberies unfolded on Wednesday afternoon. The robbers were challenged by a licensed firearm holder, who was injured in the shootout. He also managed to hit one of the bandits.

It was like a scene out of a movie, a resident of Cross Keys, Manchester, told The Gleaner as she recalled the horrifying experience of being held up at an establishment in which works earlier this week. The stillness in the small town square was...

It was like a scene out of a movie, a resident of Cross Keys, Manchester, told The Gleaner as she recalled the horrifying experience of being held up at an establishment in which works earlier this week.

The stillness in the small town square was shattered on Wednesday as six gunmen embarked on a robbery spree, pillaging a cookshop, a bar, a lottery outlet and gas station.

Their rampage was halted when a licensed firearm holder engaged them in a shootout, which resulted in him and one of the alleged robbers getting shot.

The licensed firearm holder is said to be recovering.

The robbers reportedly escaped in a waiting vehicle, but they left behind a cloud of fear hanging over the peaceful community where residents say such incidents never occur.

The woman said she was inside one of the establishments when one of the robbers entered and demanded all the cash.

“The moment when I started feeling really afraid was when I opened the cubicle door and I took out the pan to take out the cash and then he started asking, ‘Where is the rest?’ and I didn’t have any to give him. I started thinking that he might think that I’m holding on to cash and shoot me,” she said.

Another business operators on the same plaza said that approximately $200,000 worth of goods and money were taken from the business and from a customer.

“In my lifetime, this is the first time something like this happened in this community. The crime is just spreading everywhere,” she said.

Still reeling from the traumatic experience, she tearfully recalled how the gunmen, one of whom was masked, charged into her establishment, held a gun to her head and demanded money.

Residents believe that the masked robber is from the community and that he brought the others there.

Since the incident, residents of the community have been uneasy and many have opted to stay off the streets, a far cry from the usually carefree rural way of living.

“Right now, yuh hardly see anybody on the street because people are scared. Christmas is coming and persons that live in the [United] States or Canada and want to come home, when dem hear dis, everybody a go change dem mind from coming,” said one concerned resident on Friday.

One taxi operator from the community admitted that he has been on edge since the incident.

“Mi feel threatened ‘cause wi can’t deh out pon di road inna peace. We don’t know wah go happen next. Just like how dem rob di gas station, di bar, di cookshop, dem can rob wi,” he told The Gleaner, adding that the businesses have been closing as early as 7 o’clock each evening since the robberies.

Superintendent Shane McCalla, commanding officer for the Manchester Police Division, told The Gleaner that his team has since increased patrols in the community.

A similar incident occurred on approximately 6 p.m. on Tuesday in Knockpatrick, Manchester, at a gas station. A pump attendant was reportedly held hostage in that incident, while other employees were robbed of their personal possessions.

McCalla told The Gleaner that investigations are ongoing. However, he revealed that the men in Wednesday’s robbery fled the scene in a vehicle linked to a car rental company in Clarendon, and that two men were held in the parish.

He said the police have reason to believe that the men from both incidents were connected to a series of robberies in other parishes.

“What they are doing they are now targeting the quieter communities, based on the [level] of police presence and pressure that we’re putting in the more urban areas. We have now implemented certain strategies to deal with that,” he said.

Meanwhile, Bobzie Allen, vice-chairman of the Cross Keys Community Association, believes a re-establishment of the neighbourhood watch will help to prevent such incidents.

“If we have all those things in place, Tom Jones ‘round the road, who sees a strange vehicle coming to Cross Keys, could alert me. I could also alert the police to stop and check and we’re gonna be asking the citizens to work with the police because this issue here affects just about all the people,” he said.