‘This is not a FINSAC matter’ 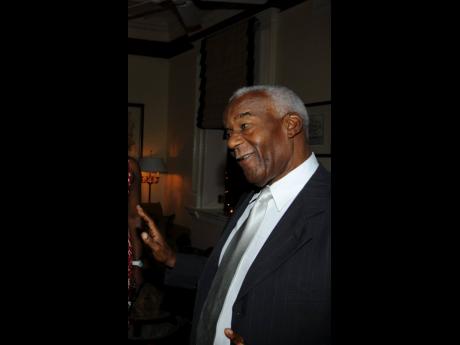 Businessman York P. Seaton has brushed aside arguments linking Thursday’s judgment by the Privy Council in his matter against Sagicor to the meltdown of the financial sector in the 1990s, insisting that the ruling had to do with a personal...

Businessman York P. Seaton has brushed aside arguments linking Thursday’s judgment by the Privy Council in his matter against Sagicor to the meltdown of the financial sector in the 1990s, insisting that the ruling had to do with a personal injustice meted out to him that has now been corrected.

The Government is liable to pay tens of millions of dollars to Seaton, after the country’s highest appellate court determined that interest must be calculated on US$428,000 owed to him and not the conversion.

The 22-page judgment triggered an intense debate as to whether the Holness administration was being made to pay for the fallout from the financial sector meltdown in the 1990s, which the Patterson administration had presided over.

“This is not a FINSAC matter,” Seaton said on Friday in a Gleaner interview.

FINSAC refers to the Financial Sector Adjustment Company, which was established in 1997 to intervene in the financial sector, owing to the widespread liquidity and insolvency problems that engulfed the sector at the time.

“This is about justice. This injustice that we suffer in this world today is what is causing a lot of these frictions. After 30 years, the Privy Council handed down justice, and I’m feeling very good where that is concerned,” he added.

Seaton told The Gleaner that the outcome has nothing to do with the Government, but instead with Sagicor.

“That [the reported sum is erroneous] I am confident in. As to whether it is X or Y, that’s a different matter, but it’s not billions,” he told The Gleaner, adding that the Government is liable “regardless of who draws the first cheque”.

The challenge stemmed from a 1992 legal battle in which the then Eagle Commercial Bank filed a lawsuit against Seaton, Y.P. Seaton and Associates and associated company, Earthcrane Haulage Limited, seeking to recover money the bank said it had erroneously overpaid to their accounts.

Eagle claimed recovery of the overpayments with interest and a declaration that it was lawfully entitled to debit $15.25 million from accounts in the name of Y.P. Seaton. The bank had also frozen several of Seaton’s personal accounts.

The businessman, in turn, sued the bank, arguing that it had wrongfully frozen five foreign currency accounts in his name. Eagle repaid some of the money it had frozen, but Seaton contended he was not sure he had received all of the funds, inclusive of interest.

However, the case was made to languish through the courts after Eagle and several other financial institutions collapsed in the 1990s, triggering the establishment of the State-owned Union Bank of Jamaica Limited through a merger.

Union Bank’s shares were subsequently sold by FINSAC to RBTT in 2001. RBTT was later renamed RBC Royal Bank in June 2011. RBC Jamaica was acquired and merged with Sagicor Bank in June 2014.

In its acquisition, RBTT was indemnified by the Government and FINSAC, which accepted responsibility for any cost or liabilities which arose prior to the 2001 share purchase.

In March 2014, the Supreme Court ruled that the bank pay monthly compound interest on the sum owed at 27.3 per cent. Seaton’s claim for principal and interest following the ruling amounted to approximately $4 billion.

An appeal filed by RBTT and continued by Sagicor ended with the Court of Appeal adjusting Supreme Court Justice Bryan Sykes’ ruling for the repayment of $15 million to Seaton to $9.2 million.

Seaton appealed to the Privy Council, asking it to determine whether the Court of Appeal erred in finding that he was due repayment of $9 million rather than $15 million; not awarding compound interest on that sum; and not ordering account to be taken of the bank accounts from which the wrongful debits were made on the basis that those accounts accrued compound interest.

Seaton’s team argued that he was entitled to compensation breach of contract by the bank for the money the bank wrongfully withdrew from the accounts; compound interest at the contractual rates on the withdrawn money from October 16, 1992 until the date when the bank repaid the money in 2019; and put forward a claim for the loss of use of the withdrawn funds and another for the loss of use of the money in the foreign currency accounts in the period in which they were wrongfully frozen.

Meanwhile, Sagicor’s legal team argued that Seaton had not pleaded or proved a sufficient case to entitle him to such interest as damages for breach of contract. In relation to the first and second claims, the bank’s team acknowledged that, as a general rule, the appropriate remedy for a bank’s breach of contract by the withdrawal of funds or the failure to pay contractual interest to its customer on deposited sums is to reconstitute the account so that it complies with the customer’s contractual entitlement.

The Privy Council, in its judgment, instructed that the order for payment of $9 million be set aside and that the accounts be reconstituted in US dollars from May 7, 1992 in accounting to be performed by the registrar.

It said that the accounting should include interest on the sums in the reconstituted accounts at the contractual rates which applied or should have applied on those accounts.

“In so far as there is no reliable direct evidence as to the rates which the bank was contractually bound to pay on the sums on those accounts, the parties have agreed that the accounting should deem the contractual interest rate to be the average annual interest rates for foreign currency time deposit accounts (i.e. the rates for call and up to one month time deposits) as published by the Bank of Jamaica.

“The interest payable is to be compounded with monthly rests since it appears from the bank statements which were before the board that that is how interest was credited to sums held in these accounts,” the court said.