FBI CALLED IN ON SSL 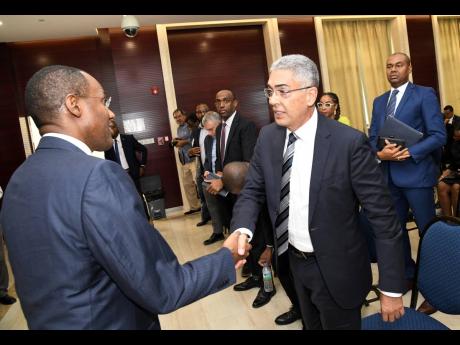 Rudolph Brown/Photographer
Dr Nigel Clarke (left), minister of finance and the public service, greets Richard Byles, incoming chairman of the Financial Services Commission, ahead of a policy address on the financial sector at the foreign affairs ministry Monday. Looking on at right is Major Keron Oliver Burrell, acting executive director of the FSC. The newly selected men have senior roles at the Bank of Jamaica.

Local elite law-enforcement agencies have reached out to the Federal Bureau of Investigation (FBI) in the United States and other international partners to assist them in unravelling the $3-billion fraud at Stocks & Securities Limited (SSL).

The scam has dealt a “body blow” to the hard-earned investments of more than 30 clients, including sprint star Usain Bolt, whose US$12.7 million cannot be found.

Finance and the Public Service Minister Dr Nigel Clarke said he has been advised that SSL had only US$1 million in insurance for the investments it managed.

He told journalists at a press conference held at the Ministry of Foreign Affairs on Monday that the Financial Investigations Division and the Fraud Squad last week asked investigators from the FBI to assist them in uncovering what has been described as one of the largest securities frauds in decades.

Clarke said that he will write to Jamaica’s overseas partners to seek assistance from international forensic auditors to probe and uncover the money trail that connects the masterminds to the SSL fraud.

He said that the probe will also seek to identify whether assets have been acquired with the proceeds of the SSL fraud in Jamaica or overseas. He said that if such assets are identified, all legal steps will be taken to restrain the assets with the intention of full forfeiture.

The minister said that the investigators are “resolute and determined” to unravel the complexity of the fraud and bring the wrongdoers to justice.

He also conceded that the coverage of the fraud by international media is a source of great embarrassment to Jamaicans.

“I feel the full range of emotions – anger, disgust, hurt – and like many Jamaicans, I am deeply pained by these events. This is a body blow to Jamaica and has the unfortunate impact of tarnishing the country’s global reputation,” Clarke said.

The fraud was allegedly perpetrated against investors over a 13-year period, said Clarke, who observed that no one had detected the misappropriation of the SSL investors’ funds.

Clarke told journalists that five public bodies had invested in the beleaguered SSL. He said that the balances presented to him on the accounts of the state-owned entities that invested with SSL are the National Health Fund – $740 million; National Housing Trust – $238.8 million; National Insurance Fund – $8.4 million; Jamaica Agricultural Society – $8.9 million; and the Jamaica Banana Catastrophe Fund – $98,000.

It is not known at this time if any of the public bodies had lost any of their investments.

The finance minister also told journalists that the FSC would release to Jamaicans a chronology of its regulatory oversight of SSL from 2010 to 2023.

Clarke charged that over the past 30 years, Jamaica had failed to successfully arrest and prosecute the players who had allegedly been criminally responsible during the FINSAC era, nor those responsible for Cash Plus, Olint, World Wise, and other such schemes.

He also noted that persons who had been responsible for public-sector frauds had escaped punishment that was regularly meted out to others.

“The SSL fraud has touched especially raw nerves – a nerve that represents a reservoir of distrust that has developed based on what many believe to be the historical Jamaican experience of one law for some and another law for others,” the minister said.

Clarke vowed that the investigators will seek to unravel exactly how the funds were allegedly stolen, who benefited, and to identify the collaborators.

Seeking to discourage point scoring, the finance minister emphasised that the SSL fraud spanned three political administrations. He also pointed out that over the period, a number of persons chaired the board of the FSC.

“This was not a JLP approach or a PNP approach. This was not Emil George’s or Colin Bullock’s or Howard Mitchell or Jackie Stewart Lechler or John Robinson’s approach,” said Clarke.

He said that this was the most important question to which the country needs answers. According to Clarke, it is a question “this Government will ensure is answered”.

SSL was a relatively small securities dealer and its problems do not pose a systemic risk to the financial system.

According to information provided by the FSC:

· Securities dealers had assets under management that exceeded $1.45 trillion as at September 30, 2022.

· The assets managed by SSL represented a little over two per cent of the total assets under management by security dealers.