Courts race for fix as motorists fume over ticket mayhem 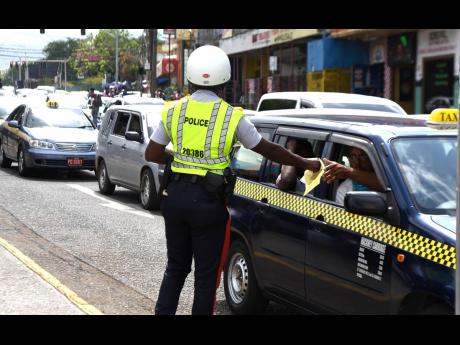 File
A policeman issues a traffic ticket to a taxi operator on Hope Road, St Andrew, on May 27, 2021.

Wendy Facey wrote to The Gleaner desperate for information after she was left baffled trying to beat the January 31 deadline.

“My ticket was issued by the Claremont police. I was directed to go to the St Ann’s Bay court office. Sad to say, I left without success. It was complete mayhem. No apparent system in place,” Facey said.

According to Facey, many people at the St Ann’s Bay court office to make payment also left in total frustration.

“What are the traffic authorities going to do to make the process easier? No one knows where or how to pay. This is a wonderful opportunity for a big boost to the government coffers but they are missing out and I fear the amnesty cut-off date will come and go and many tickets will be left unpaid,” Facey said.

Rochelle Bonitto, another motorist, said she journeyed from Manchester to Kingston on Monday and returned home worn out and was not able to pay the fine or secure a court date.

She was ticketed in 2021 while driving along Marcus Garvey Drive in Kingston.

Bonitto questioned the logistics of having to travel from Mandeville to the capital to resolve the matter.

“It was a grand waste of my day. It’s not like I am a delinquent person, I want to pay the ticket … ,” she said.

“Those are the things that need fixing before they put down any heavy hand and law on people. There are many persons out there like myself who want to pay their ticket. Things happen and you don’t get to pay your ticket. It’s difficult to pay it once you pass the court date,” Bonitto said, adding that the portal, trafficticketlookup.gov.jm, repeatedly failed to verify her driver’s licence number.

Tickets issued after February 1, 2018, that are unpaid as of January 31, 2023, will transition to the new Road Traffic Act system.

The judiciary acknowledged the bottlenecks and complaints at court offices and pledged to verify whether traffic offenders had cleared outstanding tickets.

“The judiciary understands that this is causing significant inconvenience to persons who have genuinely paid their fines. The courts said they were committed to working with these individuals to have the issue rectified within the shortest possible time once the information is brought to our attention,” the CAD said.

Where persons have paid their traffic ticket fines at court offices and those tickets are still reflected on the Traffic Ticket Management System (TTMS) as unpaid, motorists are being asked to do the following:

1. Persons still in possession of receipts should send copies of those receipts to customerservice@cad.gov.jm. The information on the receipt will go through a verification process and be updated on the TTMS.

2. Persons who are no longer in possession of receipts should email their names, TRNs, and, where available, the month and year the ticket was paid. Internal checks will be made and the records updated.