Culture of contagion at hospital nurseries 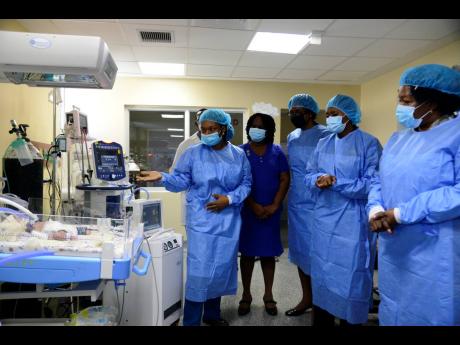 Nicholas Nunes/Photographer
Dr Britton Aiken (left) and other healthcare personnel give State Minister Juliet Cuthbert-Flynn (second right) a tour of the neonatal high-dependency unit at the Victoria Jubilee Hospital on September 25, 2020. A 2022 report of special-care nurseries at VJH and two other hospitals flagged numerous breakdowns in infection control protocols. 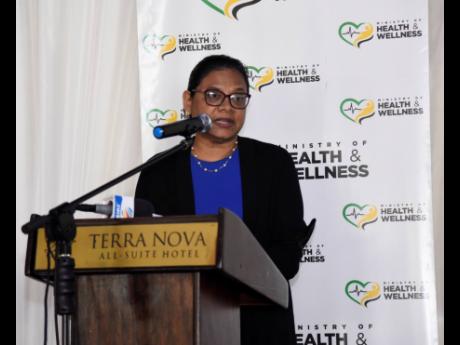 A technical mission undertaken by the Pan American Health Organization (PAHO) has uncovered a slew of improper infection prevention and control measures at three of Jamaica’s special-care nurseries.

Those observations unveil a culture of contagion, including the failure to effectively clean and disinfect the laryngoscope – the instrument used to place a tube in the baby’s breathing passage – and inadequate disinfection of equipment, such as stethoscopes, between patients.

The findings were disclosed by Chief Medical Officer (CMO) Dr Jacquiline Bisasor-McKenzie at a media briefing on Tuesday.

Victoria Jubilee Hospital (VJH), Bustamante Hospital for Children, and Spanish Town Hospital were the public health facilities visited by PAHO last October amid a bacterial outbreak that claimed the lives of 12 newborns.

A health ministry report leaked to The Gleaner had initially put the deaths at 14 but two of those cases have been reclassified.

The multidisciplinary team also observed that gowns used for contact precautions were worn from one patient to another and that suction bottles were not being cleaned and disinfected as per standard operating procedure.

Umbilical arterial catheters which are recommended to be removed by five days were being maintained for up to 10 days in some instances, the CMO said.

An umbilical artery catheter allows blood to be taken from an infant at different times, without repeated needle sticks.

“Microporous adhesive tape was shared between patients and may have travelled from one room to the next. They found that there were used sharps and dirty bandages left on the counters in one isolation and the examination table covering in the nursery procedure room was cracked, so it presents the risk of blood and body fluid absorption,” Bisasor-McKenzie said.

PAHO’s report also unearthed that bleach was being delivered from the stores in unlabelled containers, which means that staff could properly prepare 0.5 and 0.1 per cent bleach dilutions as there was no knowledge of the base percentage of sodium hypochlorite.

Further, PAHO’s report revealed that one patient room was being used to store equipment, contributing to overcrowding, and clean patient-care items were placed near sinks, putting them at risk of recontamination from splash and splatter.

“We are not hiding what the findings are. We know that there are deficiencies and we have been working with the facilities to improve on these, and this meeting that we have today with our staff from all the hospitals and the regions is because we know that even though these conditions may have been found in one facility, they also exist in others,” Bisasor-McKenzie told journalists.

“Our charge to persons here is to assess and to improve on these findings,” she said, adding that VJH has been working since last July to narrow many of the gaps outlined.

In his remarks, Health Minister Dr Christopher Tufton said once VJH picked up on the bacterial outbreak, the team and the office of the CMO did their best to cauterise and address the problem.

“The evidence is clear that the problem was solved. The problem was not as significant as was initially reported, even though one death is one death too many,” Tufton said.

“We certainly regret that the circumstances caused these babies to die. We have to learn the lessons from these circumstances to avoid a recurrence of them.”

When asked if PAHO’s full report will be made public, Tufton said it is not customary to release reports of a technical nature in their entirety.

Further, he said the CMO is available to speak with the media to provide clarity where needed.

“She has provided the general findings and I think for now that should be adequate but we can do follow-up conversations on the issue, if necessary,” Tufton said.

Meanwhile, the CMO said the ministry did not disagree with any of the findings in the interim PAHO report received last November.

- Fifty-four infections were detected between January and December 2022.

- The majority of infections, or 44 cases, were detected between July and October 2022.

- There were 12 deaths associated with the Klebsiella infection.

- All 12 newborns who died from bacterial infections at Victoria Jubilee Hospital were in respiratory distress at birth.

- Two-thirds of the newborns were premature.

- Ninety-two per cent of newborns had a low birth rate or a low appearance, pulse, grimace, activity and respiration score.

- All 12 neonates had to have an invasive procedure.

- Eighty per cent of neonates had two or more procedures, including mechanical ventilation.

- One baby was a multiple gestation – a pregnancy with more than one baby.