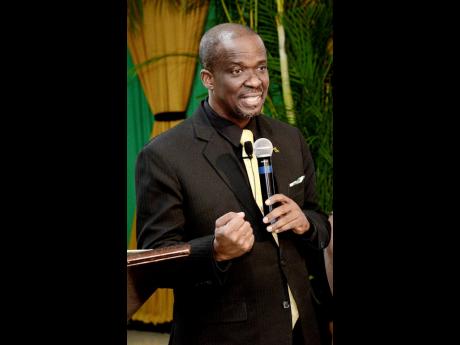 File
The Rev Dr Devon Dick: “I have never counselled or received any confession from any former or present employee, manager, CEO, or director of SSL.”

The Reverend Dr Devon Dick has said that he did not counsel the former Stocks and Securities Limited (SSL) employee at the centre of a $3-billion fraud at the investment firm.

Dick, who pastors Boulevard Baptist Church in St Andrew, said the woman he was asked to counsel in December was employed to a bank and that she had already confessed to defrauding the financial institution of a “significant sum of money” when he engaged her.

“As it relates to the SSL saga, I have never counselled or received any confession from any former or present employee, manager, CEO, or director of SSL. Furthermore, I said bank. SSL is not a bank,” Dick said in an emailed response to a Gleaner article that reported on his sermon.

“When the former employee of the bank came to me, she had already confessed to the bank that she had defrauded the bank, and I was counselling as it related to subsequent issues, for example, restitution,” he added.

Further, Dick said that the former SSL employee’s family members are not members of the church. Noting that he had made checks of his own, Dick disputed claims that the SSL fraud suspect’s mother was present when he delivered his sermon.

The Gleaner was informed that the elderly woman, who will not be named because her daughter has not been charged, was in attendance.

The mother is a long-time member of the Baptist denomination but has membership at Tarrant Baptist Church.

Dick’s revelation of the bank employee’s confession comes just over a week after reports that dozens of account holders at SSL had been defrauded.

There have also been a number of bank fraud probes in recent months that have led to arrests.

Dick did not identify the woman who made the confession.

“They asked me to talk with her. So I spoke with her, and she said to me that she took the money to help some relatives with their personal expenses,” he told worshippers.

“She did what she thought was good and right in her sight,” the pastor added, noting that a leading crime-fighter had once indicated to him that women are more philanthropic with their thievery than men.

However, Dick, who said the “noble” cause did not justify the means, urged the congregants to avoid temptation.