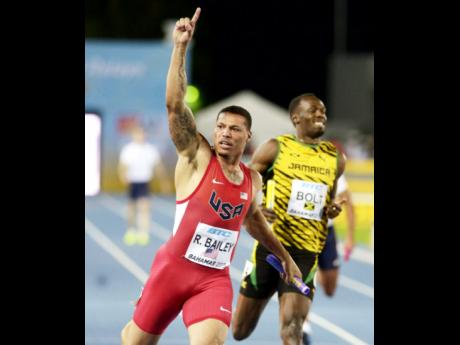 American, Ryan Bailey (left) celebrates his teams 4X100m win at the IAAF World Relays with a vanquished Usain Bolt in the background.

No praise can be too high for the conduct and character of American sprinter Ryan Bailey on his recent visit to Jamaica. This brash 26-year-old grudgingly got the respect of many of the patrons in attendance at the Jamaica International Invitational meet by his solid performance on the track, but it was his demeanour off the track that won the hearts of even his harshest critics.

Many Jamaicans had scant respect for the athlete known, certainly in my circles as 'Project Beat Bolt', as he was widely regarded by USA Track and Field as the prototype sprinter with the physical characteristics to match the Jamaican sensation.

That disdain turned to absolute wrath when he mocked the Bolt's 'To the Worl' ' trademark pose and drew his finger across his neck in cut-throat fashion after holding off the big man on anchor of the 4x100m at the World Relays. It was Jamaica's first loss in a championship race in that event in seven years.

It then came as no surprise when Bailey was greeted by tumultuous boos as he entered the National Stadium, the backyard of the icon he had 'dissed' a week earlier. No one cared that he made it clear that it was all in fun and intended no disrespect, in his pre-competition interview. The boos were as sustained as they were loud, and the American applauded the crowd in response, which only served to make them louder.

The young sprinter then let his feet do the talking and ran a very smart 9.93 to record the second fastest time in the world this year behind a scorching run from Asafa Powell.

The boos didn't relent, but instead of turning tail and retreating to the comfort of his hotel, the young man walked around the stadium and stood in front of the bleachers. He then spent the next two hours signing autographs and posing for pictures with adoring female fans oblivious to the hecklers and anxious to be captured on film with the good-looking young man.

Suddenly, the boos went and were replaced with genuine respect for a truly classy and

talented American sprinter. Who knows? Maybe now an adopted son of the soil.