Letter of the Day: Pray for the police 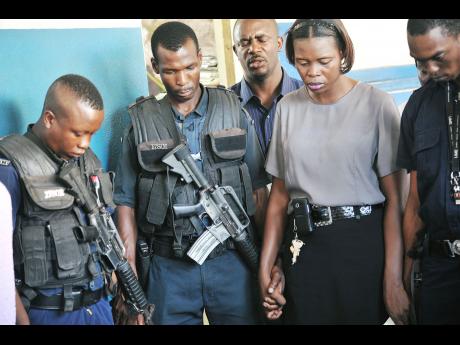 Whenever we hear a siren, I tell my family, "Let's pray for whoever is in trouble," figuring that covers anyone who has had an accident, anyone whose house is on fire, anyone who is the victim of a crime, or even anyone who has committed a crime.

The other day, a police car went by our van, and my mother said, "Let's pray for that police officer." I was ashamed to realise that I had never really thought about the police officers being the ones in need of prayer - but they are. When they go to answer a call, they never know what they'll be dealing with - something small, something really awful and dangerous, or maybe nothing at all. Or it might be the last thing they do on earth. They never know.

The news is full of police officers who did their job wrong, and who abused their power. It's a good thing to shine a light on corrupt or out-of-control police forces, and we should all know what our rights are as citizens. However, too many Jamaicans simply don't consider the police to be on their side, and that is an intolerable state for our country to be in.

Now, along with the awful stories of corruption and brutality, we hear the occasional story about a police officer going out of his or her way to perform some extraordinary act of generosity or service, and that, too, is a good thing to shine a light on. But even these stories - the acts of extreme kindness or bravery - don't provide the full picture of a typical day in the life of a first-responder. What's commonplace, and which goes largely unnoticed by most of society, is that thousands of police officers do everything right every time. Everyday, they take care of the situation, help someone out, and make the community safer. These typical days, of course, don't make the news - but they are occasions of potential danger every single time. The police need our prayers as much as the people they are there to serve.

And what about the bad apples? They need prayer, too. Every siren should be a reminder that someone is in trouble - a victim, a perpetrator, an officer who is ready to do the right thing, and an officer who is in danger of doing the wrong thing. So next time you hear a siren, say a Hail Mary for those who are Catholics Christians or a quick "Jesus, please be with whoever needs your help" - and remember that that includes the children of God who are in uniform.

Seminarian for the Roman Catholic Archdiocese of Kingston, Jamaica