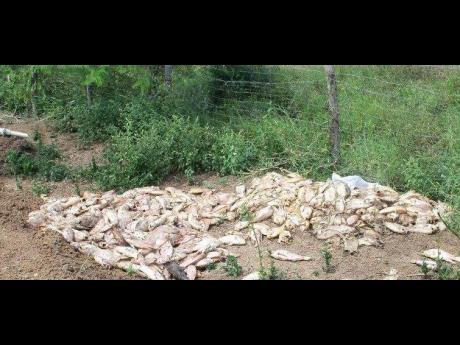 Contributed
Hundreds of thousands of dollars worth of fish killed when ponds went dry because of a disruption in water supply. 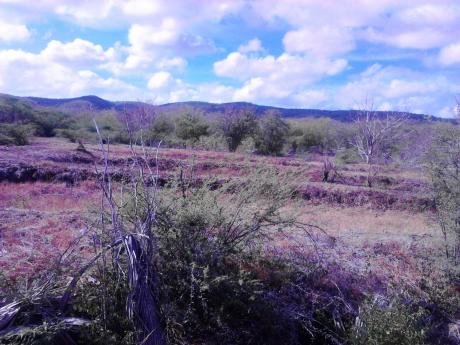 The Hill Run Fish Farmers and Agriculture Association in St Catherine is objecting to a proposed pipeline system that is being put forward by the National Irrigation Commission Limited (NIC) because of the high cost farmers would incur if they utilise the system.

The association members' objection is grounded in the fact that the proposed system would see water being pumped downhill; that it's time-consuming to operate, and the cost of purchasing water through the system would destroy the fish-farming businesses. Based on the proposed cost of $45 to pump a cubic metre of water through the system, farmers would pay, on average, $400,000 each to full a one-acre pond.

The association is highlighting the fact that its members, whenever water is available, pay $1.80 per cubic metre for the commodity, which is delivered through a gravity-fed system.

Another sticking point is that it would take an average of 27 days to fill the said one-acre pond under the proposed system. The current gravity fed system fills the said pond in 72 hours.

The association said that the energy cost, annually, to pump the water downhill to fish farms would exceed $100 million; while under the current system, there is no energy cost to transport the water.

The association said the system that is being proposed comes after a part of the original system that delivered water to the area has been dismantled and rerouted to another area.

The farmers are accusing the NIC of allotting a portion of the system that should have supplied water to their farms to Bernard Lodge. The system, which comprises a network of trenches that transport water, was named Notch 15D, and according to the land titles held by the members, it should provide the area with water.

However, the association has asserted that the trench was renumbered Notch 18 and the water circumvented to Bernard Lodge, although that area already has its own notches located in March Pen.

The southeastern side of Hill Run has a combined acreage of 600, and since 1974, the water was measured for the area at the gate at the marl pit. The gate has since been downsized from two feet six inches to six inches and moved four miles away.

For the past two years, the association has complained to the NIC, but nothing has happened.

A letter was written to the NIC on July 7, 2015 requesting that the notch be returned, as soon as possible, to the southeastern side of Hill Run, so farmers could access water as stipulated by their land titles, and to avoid any unnecessary litigation.

The association is also calling for the NIC to terminate the employment of Howard Hill, Rohan Stewart, Joseph Gyles, Milton Henry and Ranford Smith. The association is maintaining that investors and stakeholders in Hill Run would not work with the men any longer.

The association has sought the intervention of the public defender, claiming that its members are being denied the right to access water by the NIC.