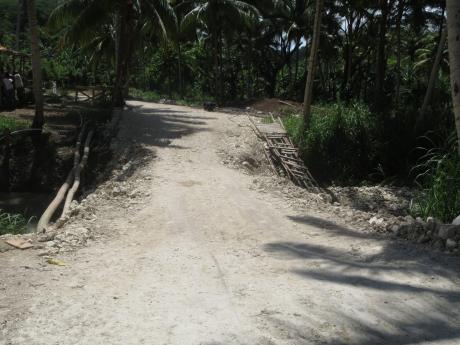 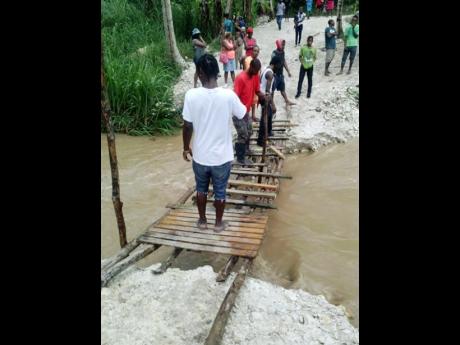 Residents of Latium, in St James, making their way across the makeshift bridge they have constructed. The NWA said it was misleading to suggest that this makeshift bridge was still being used.
1
2

I write in response to an article published in The Gleaner, dated Tuesday, October 6, 2015, which appeared under the heading 'Latium residents unhappy - makeshift bridge not cutting it'.

The article spoke of the Latium Bridge Construction Project which is now under way. Unfortunately, this article contained inaccuracies, primarily as it pertains to the detour route which is now in use. The makeshift bridge, which is pictured, does not represent what obtains on the ground. It instead depicted a short-term response, following the erosion of the temporary detour road on September 16, 2015, in the aftermath of torrential rainfall in the area.

Following this incident, the National Works Agency restored the detour road, which now consists of a culvert and granular base. The reconstructed detour road has been in use since September 20, 2015. Prior to this, there was a detour road made of a packed stone subbase and filled with granular material, quite unlike the structure depicted in the article.

It is, therefore, misleading to state that the makeshift bridge, pictured, has been in use for the last two months. Furthermore, the current detour can be used whenever it rains, contrary to what is stated in the article.

Additionally, the detour road serves not only pedestrians but also motorists, unlike that which is suggested in the article. As it stands, residents, as well as members of the project team, have been using motor vehicles to access this roadway.

This detour road became necessary as the original structure had to be demolished to make way for the construction of the new bridge. This temporary road lies adjacent to the location of the bridge which is currently under construction.

The Latium Bridge is being constructed at a cost of approximately $20 million under the Government of Jamaica's Major Infrastructure Development Programme. This project is an important one for the community as the original structure was deemed unsafe, hence the need for the project at this time. The bridge connects the community of Latium to the neighbouring community of Salter's Hill.

This project is currently on target and is expected to be completed by the end of November 2015.