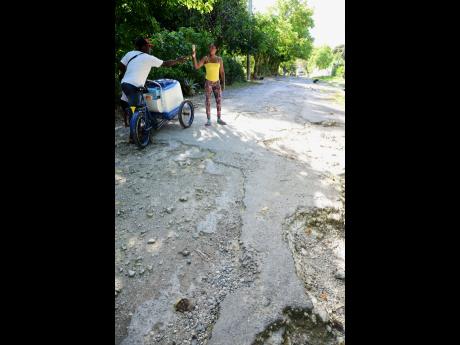 Patrick Planter
The roads in Trinityville, St Thomas, are in horrible condition. Even with the construction of a South East Highway through the parish, interior roads in communities like Trinityville are expected to be renovated as well.

In addition to the obvious economic benefits of the South-East Highway, there are other advantages that pass over the heads of those in a position to make things better, and who are able to make better decisions for the country on a whole.

Just listening to the news, some spin-off of such a highway can be seen if they/we are really looking at ways to make this nation better.

In The Gleaner of April 13, 2017, under the caption 'JUTC to roll out rural-urban transport plan', the minister of transport was quoted as saying, in part, "The transport plan would be rolled out between Old Harbour in St Catherine and a number of routes in Clarendon later this year."

Now, being a resident of Morant Bay from birth, I know that with good surface on the existing winding road, it takes one hour to travel the 31 miles (50km) to downtown Kingston. Obviously, with the highway, it would take 20 minutes. This means a bus leaving downtown Kingston would reach Morant Bay, also in a parish adjacent to Kingston and St Andrew, long before it reaches Old Harbour, Hellshire or anywhere out in Clarendon. So why not a route to Morant Bay?

The obvious answer, which everyone in authority is afraid say aloud is, "The road is too bad; it will mash up the buses." It is fine, however, when the roads "mash up" the vehicles of the residents of St Thomas and then the same ministry sends the Island Traffic Authority, the Transport Authority, and the police to check the condition of our vehicles that have to travel on this disgraceful excuse for a road.

The other spin-off on the improvement in the transportation in the east would be the ease of travel for the thousands of commuters who live in St Thomas and have to commute to Kingston and adjoining parishes because of lack of employment opportunities in the parish. The reverse will be true with the highway, that is, many more buses would be required to transport people to the east to take advantage of the employment because of the foreseeable economic development.

Again, in the news today, April 19, 2017, it was reported that the St Thomas Municipal Corporation was disturbed by the fact that an alternative site for the solid waste disposal site at Church Corner in the parish was Danvers Pen. The original proposal was said to be Riverton. This again points to the highway, since it will take an hour to reach Riverton, on good road, while it would take more than an hour to reach Danvers Pen on roads that would damage the trucks within a week or two. But the road from Morant Bay to Trinityville is a separate horror story.

Also today, there was a clash between the Government and Opposition about road repairs. In all of that talk and crosstalk, I listened keenly, but no mention was made, in the report that is, of any road slated for repairs in St Thomas. I hope that I did not get the full story.

We note that some months ago, money was allocated for road repairs in St Thomas, but in the end, very little work was done in the area that needed the most repairs, so the roads are still in a disgraceful state. True to form, the holes have been cut 'square' but filled with marl only, so as to provide a better edge for chopping your tyre when you hit one of them - not if, but when, you hit one, since the road surface is all holes.

Back to the South-East Highway. It has been over three months since Finance Minister Audley Shaw and others went to China to secure funding for the project, but to date, the silence is deafening on the success of that trip since we have had no further communication on when the project will start.

Where are the final plans, and where can they be viewed?

When will land acquisition start?

When will we see equipment moving into place?

When will we see start-up activities?

These are only a few questions which, if answered, will tell us there is hope that we will eventually get the South-East Highway.

We, the people of St Thomas, need to keep the project alive by demanding accountability from our political leaders and lobbying for a change from being the 'forgotten parish'.