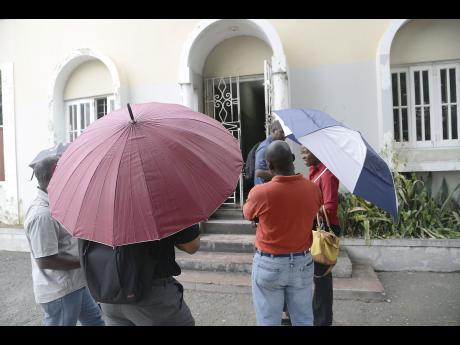 Norman Grindley
The Kingston and St Andrew Traffic Court has no parking available for persons who turn up for judicial matters.

I recently went to the Traffic Court on 36 South Camp Road because I missed a traffic ticket payment due date.

I drove to the gate and was informed by men who were there that there was no provision for parking, except for staff. They directed me to an open area at the front of an adjoining property for parking. After parking, I was informed by one of the men who directed me to the parking spot that there was a J$200 fee and that it should be paid upfront. I didn't know if there was a formal arrangement between the court and whoever manages the adjoining property because there are no signs to indicate anything.

Things got intense because he followed me to the gate of the court and began to get loud, repeating that the fee must be paid upfront, in an attempt to embarrass me. I conducted my business then asked to be escorted back to my car, feeling my safety was threatened given the aforementioned circumstances. The officer said he was afraid and asked another to accompany me.

The escorting officer confirmed that available parking space on the premises of the court was only for staff and that persons who attend court usually find parking at nearby properties and "may be asked to make a contribution". The officer instructed me to talk to the person who identified himself as being in charge of the area where I was parked. I paid him $200 in front of the officer, wondering if it made sense. I left feeling taken advantage of.

The Traffic Court has no parking space for persons ordered to attend court and then leaves us to pay to park, literally at our own risk! This appears to be nothing but Government-subsidised extortion.