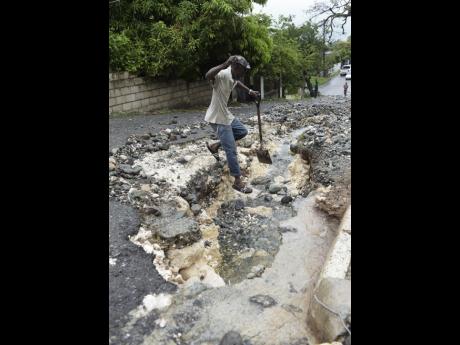 It was more than just an idle gesture when I asked on my Facebook page a few nights ago, "What do the people of St Thomas want?" Unsurprisingly, the resounding response was 'good roads'.

I find it peculiar that so many parishioners are clamouring for such an important commodity, but our cries seem to fall upon deaf ears. To say I was 'overjoyed' when the previous administration announced that a highway would run through St Thomas would be an understatement.

Can you imagine how heartbroken I was when the current minister of finance announced unapologetically that this dream was never to become a reality, but rather that the roads will be repaired, with four lanes from Harbour View to Albion and two lanes thereafter? Did we have a say in the decision? No.

We reluctantly accepted that which was imposed upon us.

I must now ask why, after so many months that that decision was taken, we are yet to hear something further. Pardon my ignorance if discussions are being made in hushed tones in specific circles, but I believe the deplorable condition of the roads is a public matter, so we should be kept up-to-date.

BEING TAKEN FOR A RIDE

The silence has led me to believe that, yet again, the people of St Thomas are being taken for a ride.

The Government does exceptionally well at public relations, but what exactly are the priorities? Just the other day, persons were questioning whether an election will soon be called because of an ad on television making the public aware that they delivered on the $1.5m income tax break. Why then can't we be told exactly what is in the pipeline for St Thomas roads?

The past few weeks have been the worst, with the water from the heavy rainfall washing away more of the already compromised structure. It is a shame to acknowledge that even low-lying cars have difficulty traversing on the main road because of the pools and ditches that they are bound to encounter and the damage that will be done to these vehicles as a result.

Every day, the argument stands that good roads will attract investors, create more employment opportunities, result in less travel time, among other things, but that is just talk, right?

I want this Government to remember that St Thomas Western was the determining factor in who formed the current Government. One would expect that they would show gratitude.

We need our roads to be fixed and we need to hear something about what plans are being made and how soon these plans will materialise.