Letter of the Day | Calabar is in need of leadership 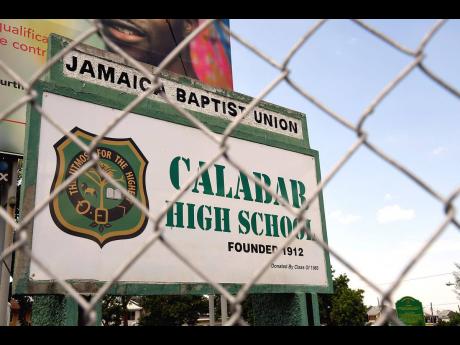 Calabar High School on Red Hills Road, St Andrew, doesn’t have a student indiscipline problem; what they have is a leadership/management problem. And the sooner the old boys, the Ministry of Education and parents realise this, the better for the students.

Recently, it was alleged that boys from the school’s ‘revered’ track team assaulted a male staff member, and the way it was dealt with by the administration of the school proves to us that, indeed, there is need for proper leadership at the school.

It would seem that the current acting principal, Mr Calvin Rowe, has lost total control of the school, and indiscipline, disorder and vulgarity are the order of the day at Calabar High School. The teacher’s account of the assault signifies a rudderless ship heading towards an iceberg.

And now, after losing the Boys’ Athletics Championships to Kingston College, a video has surfaced in social media of the school population, along with adults in the auditorium, chanting, “KC a b****man school”. There are also reports that the acting principal was seen in the video, as well, egging on the boys in the chant.

This further concretises what many of us in education recognise, which is a cry for help at that institution of higher learning. There has been a total abdication of duty by those in charge, and it shows the level of decadence that has overtaken that place. And it would seem that the administration has normalised this kind of behaviour.

Calabar is going through a crisis, and the sooner they recognise it and fix it, the better for these young men and for the nation on a whole.