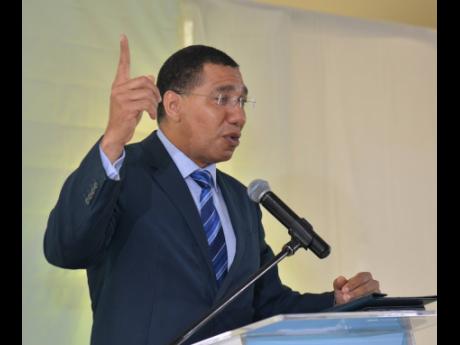 Kenyon Hemans
Prime Minister Andrew Holness has been too soft on corruption, a letter writer asserts.

Prime Minister Andrew Holness has made history in becoming Jamaica’s youngest prime minister. He is on a trajectory to make even more history, but it is up to him.

Prior to the electoral victory by the Jamaica Labour Party, one of Mr Holness’ campaign promises was to eliminate corruption. Citizens have welcomed this and expect that corruption will be got rid of from the top down.

There is rising concern as we now see, under Mr Holness’ leadership, corruption in government agencies, and perhaps even in his Cabinet. However, Mr Holness’ response to corruption has been lukewarm, and he has seemingly mollycoddled persons who have been hit by corruption allegations.

Such action gives the appearance that he has put party over country.

Mr Holness can be the biblical little David who slays the Goliath of corruption. He has the power to do the right thing and say ‘no more to Goliath’, by demanding accountability from every Jack man and Jill woman in executive positions in Government.

The citizens of Jamaica will reward and re-elect Andrew Holness if he uses the power in his hand for the nation’s good.