Cricket: Of joy and heartbreak 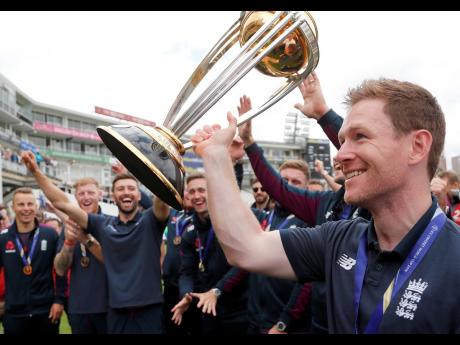 England's Eoin Morgan, right, and teammates celebrate with the trophy at the Oval in London, Monday, July 15, 2019 one day after they won the Cricket World Cup in a final match against New Zealand.

On Sunday, the final of Cricket World Cup was played at the home of cricket, Lord’s. The pre-tournament favourites, England, was facing a plucky New Zealand team. Neither of these teams had won the trophy before, so it was bound to be an exciting, nerve-wracking contest.

The last time two teams played in the World Cup final that had never won the trophy prior was in 1992, when Pakistan defeated England. For New Zealand, it was a chance at redemption after losing the 2015 finals and for England, a win would put a fitting end to a journey that started after being eliminated from the 2015 World Cup.

Would New Zealand get their redemption or England their fairy-tale ending? Well, New Zealand won the toss and elected to bat first. Putting up a respectable total on the board in a final places the chasing team under pressure, and that it did.

England eventually overcame the pressure and in what was arguably the best World Cup final of all time, prevailed in the ‘super over’ to become champions of the world. It was exciting, exhilarating, nail-biting.

Fans and neutrals sat at the edge of their seats as they watched the last few overs. A tournament that started over five weeks ago came to a thrilling end. There was no redemption for the New Zealanders. Their efforts to rise to the top were blunted as the English sent them ‘down under’. It was a deserved win for a team that started the tournament as No.1 and favourites.

Cricket is a game of glorious uncertainties and Sunday’s final showed why: scores tied after 100 overs; scores still tied after a super over; England getting six runs because of an overthrow. This final had it all. It was an epic. Neither team deserved to lose, but one had to win and when Martin Guptil was run out off the final delivery of the match it brought joy for the English but heartbreak for the Black Caps.