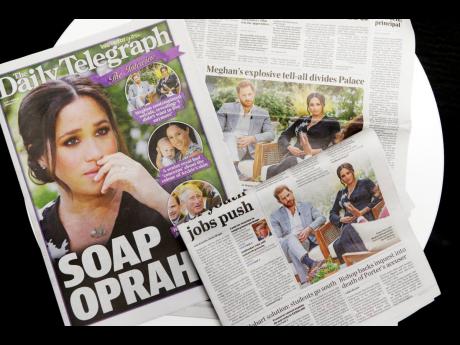 AP
Australian newspapers report in Sydney, Tuesday, March 9, 2021, on an interview of The Duke and Duchess of Sussex by Oprah Winfrey.

Oprah Winfrey’s chilling interview with Meghan Markle and Prince Harry is a sober reminder that the time is ripe for Jamaica to sever its anachronistic relations with the British monarchy and to assert its sovereignty.

It was appalling to listen to Meghan Markle’s jaw-dropping tell-all about her and Harry’s experiences as members of the British royal family. One of the bombshell revelations during the interview was when the couple was asked about the skin colour of their first child, Archie, before he was born.

Millions around the world were aghast when Meghan made the revelation that a member, or members, of the royal household uttered the bigoted comment about the colour of Archie’s skin. It must be noted that the monarchy is a microcosm of British society that was, and still is, inherently racist.

It is time for Jamaica to reckon with its colonial past and remove the Queen as its head of state and recognise that we owe no loyalty to her.

The evil of the British monarchy is twofold. First, if we believe that all humans are created equal, how do we justify exalting a group of people above the rest of mankind by simply calling them a king or queen?

Second, the hereditary right of monarchy is an affront to laws and treaties and an imposition on future generations. No one has a right by birth to exalt their family above others.

Our current leaders must be “great defenders” of the land we love and begin the process of joining other nations like Guyana in 1970, Trinidad and Tobago in 1976, and Dominica in 1978 to sever ties with the Queen.

The monarchy and its sycophants have convinced themselves of their racial superiority. We must forcefully debunk that pseudo-scientific ideology.