Get JDF to run facilities in a crisis 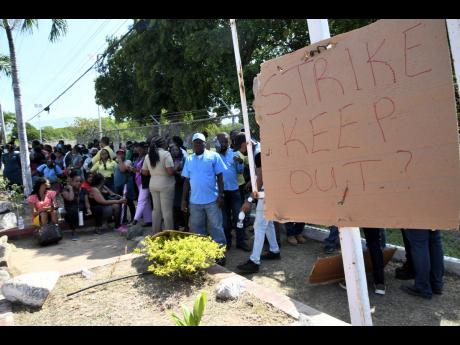 Rudolph Brown
NWC workers on strike at the Marescaux Road office on Tuesday.

On Tuesday, May 10, we woke up to the news of a strike by the National Water Commission (NWC) as a result of the failure of the Jamaican Government to implement an outstanding 2019 reclassification exercise in line with other public sector groups. So dire is the industrial action, the NWC’s management decided to join. This is a rare occurrence. Since then, most consumers have been receiving ‘diminishing marginal returns’ of their ‘water is life’ commodity. On, Wednesday, May 11, at the time of penning this letter, the situation had worsened. At my workplace, only one department had water. Many schools have notified parents and guardians to collect their children.

Undoubtedly, those government officials with responsibility for the contract negotiations share a portion of the blame for allowing this matter to escalate, and an investigation needs to be carried out in order to determine where the breakdown took place and hold those responsible accountable in a transparent way. The issue of essential services and the ‘right to strike’ is another major concern.

The NWC and affiliate associations/unions must share the remaining portion of the blame, as clearly, protocols for a strike were not adhered to. I am not interested in that debate now, the old-style management and union tactics are archaic. Like hundreds of thousands of Jamaicans, we simply need uninterrupted supply of water.

It is against this background that the Jamaica Defence Force (JDF), going forward, should be called, in the event that such an action happens in the future. They cannot be ‘passive bystanders’ in these matters. The JDF needs to activate its systems to take charge of all the NWC plants to ensure that water supply is not disrupted. If no such laws exist, they must be created.

How long will the public be held to ransom for the incompetence of others?