Imprisoned within the walls of skin colour 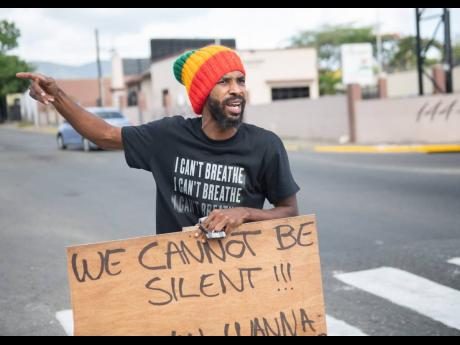 File
Akil Andrews, one of four protesters who stood on Hope Road across the United States Embassy on June 4, 2020.

The idea of race is still an insistent force that decides how we view people with different shaped eyes, shape of their noses, hair or skin colour. Notwithstanding that concept of race is non-existent on the scientific radar, it is still a powerful energy that determines how one views others of a different race.

This has been highlighted during the coronavirus pandemic where the Asian community was subjected to rough treatment and were scorned for being the reason for causing COVID-19. The same fictional disease of superiority apparently triggered a 18-year-old Caucasian, in Buffalo, New York, where he went on a murder spree. It was reported that he was saying “sorry” after realising his weapon mistakenly faced someone whose features resembled his.

Racism is just another fanciful version of human prejudice – where the phantoms we invent replace reality, however much the actual truth may differ. A race of people may either become falsely inspired or discouraged by the accidental ‘gift’ of their skin shade, or the shape of physique or type of hair. If the world could be compared to a garden, it would be delusional to divide and extol the virtues and colour of a specific rose above another where the differences are meant to coexist and to inspire collective enrichment.

Race and racism are undeniable, however you try to discount or to rationalise their unimportance. Yet, they could easily become a reverse enchantment that seeks approval by virtue of the same external differences, and not for who we intrinsically are – human beings and brothers from different casts. It would be an indictment to the connective importance of man to make barriers shades of colour, when science is making bridges – or to be imprisoned within walls of varying skin colour when the reality sets us free.