Letter of the Day | Who is policing the police? 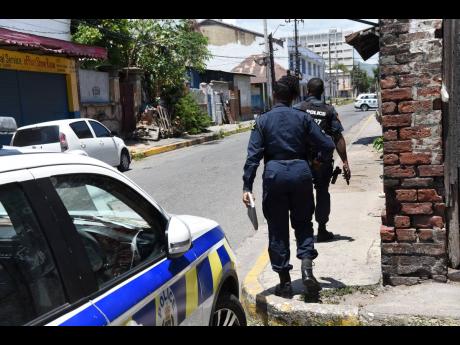 Last Thursday (May 19), the minister of finance, Dr Nigel Clarke, sought to assure the police that they would be getting more money after the public-sector review is completed. Even though the time period is indefinite, it gave the police something to hope for while the Government bide its time to avert industrial action.

As I listened to the minister pontificate I was alarmed, even shocked, when he disclosed that the base take-home salary for constables was $800,000 per annum. This works out to be $67,000 per month and less than $3,000 per day. Basically, constables are working at $375 per hour (US$2.40) Is it any wonder that our law-enforcement officers have been accused of being dishonest, corrupt, and untrustworthy. How could this be a living wage for our officers in uniform? Also, how are some of the officers so thrifty that they are able to drive luxury cars, build mansions and support sundry partners? The Government must be blamed for creating a system where the enforcers of the law are so poorly compensated that they have to resort to activities that pay them better from the underground economy.

I was at my barber shop recently, where I met three young men. We discussed about the social ills in the society. None of them seemed to be more than 20 years old, but as I listened to their take on the issues, I came away with lessons in sociology and economics that were not taught to me in school. I even thought that the prime minister would do well to go sit down and talk with some of these youth. He may just find the know-how that could help him in his governance. These guys are street-smart; they made fun of the fact that none of their teachers can work in a month what they are likely to make in a day. All three concurred that you don’t need more than the basic education to survive; you just need to be smart and skilful and willing to take risks.

One told me that on his way to the shop, he was stopped by the police and had to give him $30,000, so as not to be arrested or cited, because he does not have a driver’s licence. The question that begs to be asked is, who is going to police the police?

Every civilised country should ensure that law-enforcement officers are paid a decent living wage so that they don’t fall prey to corruption and bribery. When an officer’s income is way below his output, then there is going to be disloyal to the system they protect.

The minister of national security, if he is really awake, should be aware that the nation’s citizens are not safe. The powers that be need to stop hoodwinking the force with empty-calorie promises and make a deliberate effort to address the salary of the security force.

The police should not be fighting this hard to be justly recompensed. I agree that all sectors can’t get pay raise at the same time, but law enforcement, education and healthcare should be at the top of the Government’s priority.

The security minister needs to hold himself accountable for having a system in place to police the police and weed out the bad ones. If he doesn’t, then corruption is going to become an endemic. Mr Chang’s job is challenging, but he needs to fix this broken force.