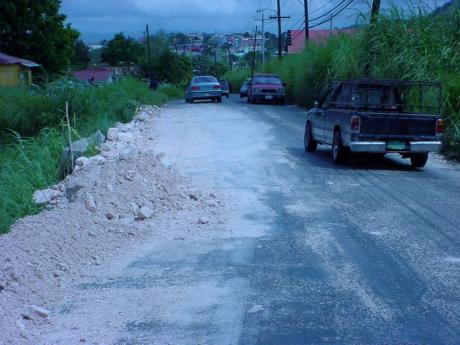 Notwithstanding financial and legislative intervention from government, the culture of crime in Jamaica is like a plague for which a cure is not forthcoming or known. The prospects of significantly suppressing such a debilitating situation seems unlikely to happen post-haste, because aspects of the Government’s recently mooted crime-fighting policy don’t find favour with the parliamentary opposition and other stakeholders.

Another issue that preoccupies some Jamaicans is the matter of ditching the monarchy. And, for them, it is an expedient issue. But, for most of the population, there are far more urgent issues in the country to address.

Undoubtedly, crime reduction is an imperative. But, guided by history, a substantive diminution does not seem imminent. Regarding the monarchy, it is still not known how soon their reign as head of state will come to an end.

What can happen immediately, though, is the fixing of bad roads. Far too many, if not most, of our roads are in disrepair for long. Probably the Government is at ease because people are not demonstrating or mounting road blocks.

The undulating bumpy road surfaces with numerous potholes are unbearable. It can be interpreted as the State showing little or no compassion for the plight of its people.

A primary example is a section of the thoroughfare in central Jamaica that vehicles going east to west, and vice versa, must drive on. It is the roadway starting at the Glenmuir Bridge which spans the Rio Minho River, to Whitney Turn at the Clarendon and Manchester border. That corridor has been screaming for proper rehabilitation for so long – especially the section from Scott’s Pass to Whitney Turn, which is an eyesore and a passage incurring exceedingly lengthy delays.

Inevitably, productivity and appointment schedules are adversely affected. I urge the Government to repair the roads that are in bad condition. Some of the roads include those in Manchester, in all four constituencies, including the Winston Jones Highway that passes between the central and north-western constituencies. The many years of patching have merely added to more raised portions and road bumps. These roads do not need patchwork but a total and proper resurfacing, which is long overdue.