Give more powers to security forces 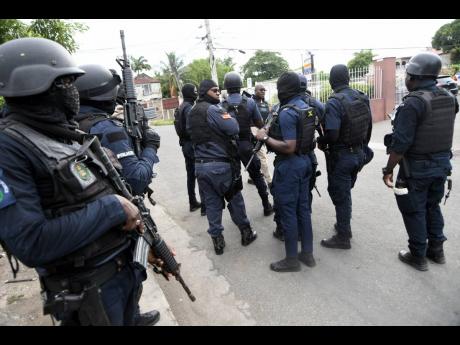 Rudolph Brown
Policemen swarm French and William streets where an alleged gunman was killed in Spanish Town. Two others were slain by gang assailants in the market district.

First, let me say this: our police and armed forces are not perfect, and they are under tremendous pressure trying to keep us safe. But what I realise is that whenever there seems to be a controversial shooting death of an accused by the police, all hell breaks loose against the cops. But when policemen are killed by criminals, there is no such outcry. It is time we change that attitude against our law-enforcement personnel. We blame the police and armed forces too much when they kill bad ‘bwoys’, and show remorse and anger over the deaths of criminals. It happens many times.

The Government had proposed that a person convicted of illegal possession of a firearm must serve at least 15 years in prison before becoming eligible for parole. Does that statement still stand? If yes, when will it become effective in the near future? And why did he come up with such an important suggestion, after decades of high murder rate in Jamaica?

Last, pertaining to the state of emergency, our security forces always detain wrongdoers and ‘gunpests’ and seize illegal guns from some of them; and after some days they let them go. Are they doing the right thing, letting these people go so quickly? Do they get enough time to conduct proper investigations?

A gun is a serious weapon which gives one power, almost supreme power, and is responsible for causing the deaths of many innocent people in Jamaica. It is my opinion that all those who are found with illegal weapons during the state of emergency should not be released. And those who are found guilty of other crimes should remain behind bars, too.

This is a serious matter. We cannot afford to waste time and energy during the state of emergency and rush into letting go of the bad persons.