Letter of the Day | Behind the façade, a different truth is revealed 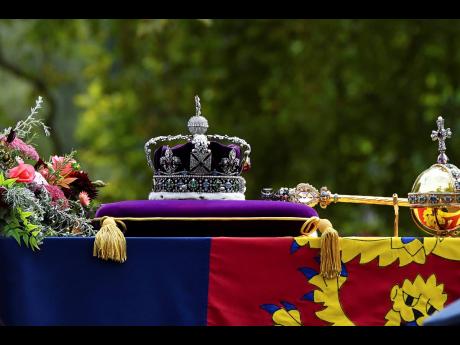 AP
The coffin of Britain’s Queen Elizabeth II with the Imperial State Crown resting on top is seen during the State Funeral Service, yesterday, in London.

Watching the queues stretching for miles outside London’s Westminster Hall, where Queen Elizabeth II was lying in state, triggered some of my earliest memories.

I remember holding my mother’s hand queuing outside the butcher’s shop for a meagre piece of low-cost meat, during times of rationing in Britain that continued from the dark days of World War II up to 1954. I remember the first time my mother cried in front of me when she heard on the radio that King George VI had died in 1952. I remember listening on that same radio to the 1953 coronation of Queen Elizabeth II, and later watching the ceremony on a Pathé newsreel film at our local cinema, as we had no television at that time. I remember how the Queen had looked so tiny surrounded by the Archbishop of Canterbury and others in the hierarchy of the Church of England, all dressed in regalia with various jewelled crowns, ornaments and rituals dating back to 1066. I remembered her being anointed monarch and Defender of the Faith, as leader of the Anglican Church, among many other titles.

I remember learning in History class a few years later how the Church Of England was formed by King Henry VIII in order to get his marriage to first wife Catherine of Aragon annulled; he could then marry his mistress, Anne Boleyn, as the Pope denied the divorce in the Roman Catholic Church.

I remember that Queen Anne literally lost her head a few years later, but not before giving birth to the future Queen Elizabeth I. I remember how the British landed gentry and titled aristocracy had fought bloody wars for centuries, resulting in the various Kings, Princes, Barons, Dukes, Earls, Counts, etc, claiming castles, palaces and huge tracts of real estate that remain in their descendants’ possession until today.

I remember going to sea at the age of 16, and frequently travelling to countries colonised in the name of the British Crown, where commodities had been plundered and nations’ entire wealth exploited. I remember witnessing so many people living in abject poverty as a result, and making me so aware that my own hard-scrabble youth in post-War Britain was not comparable to their hopeless plight. I remember learning that the Anglican Church was once the largest slave owner in Barbados, where their slaves were branded with the word ‘society’ across their chests — meaning ‘Society for the propagation of the gospel in foreign parts’.

I remember that when the façade of all the pomp and circumstance concerning religions and monarchs is removed, a far different truth is revealed.