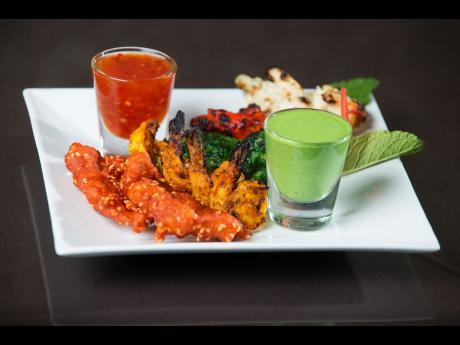 If you are looking for the ultimate package of mouth-watering food and the perfect ambience, look no further than Saffron Indian Cuisine.

With this being their third year participanting in Restaurant Week, Vivek Chatani stated that the restaurant has tremendously benefited from coming on board.

?Restaurant Week widens our customer base and exposes us to new ones. It is also very profitable as we do get a great amount of bookings during this period, and also, we love the extra publicity and promotion that we get,? Chatani stated.

Challenged to Do Us A Flavour, Chatani chose the mixed non-veg platter as the feature presentation. According to him, the platter contains three meats in a combination not usually opened to diners. It also features a chili fried fish, marinated in red chili and sesame seeds.

?The platter consists of the delicious chicken tikka, haryali chicken seasoned with coriander and spinach, and the malai chicken, marinated in cashew and yogurt. This is served with chili sauce and coriander mint chutney. This will definitely be our most popular dish because normally, patrons would not have the option to get these three meats on one platter,? he told Food.

The fusion of Asian spices coupled with the enticing aromas is sure to have patrons lining up for a taste, especially with the mouth-watering singapoori fish, marinated in coconut milk with a myriad of Thai spices and served with butter naan and rice.

From the savoury mixed platter to the scrumptious singapoori fish, Chatani prides himself not only on offering great food and service, but also great ambiance.

?Patrons will definitely be getting value for money, an assortment of meats, and the ambiance is great. The layout of the restaurant is a perfect setting for intimate dining for two or for groups of family, co-workers or friends.?