Costume by design: Reveller get creative for road march 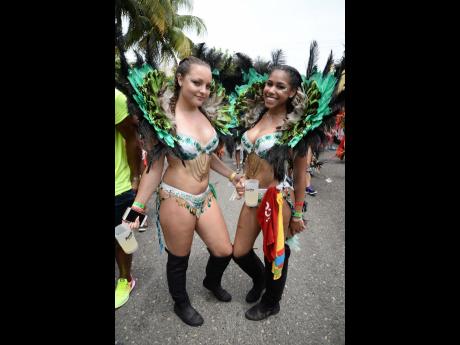 From left: Dekota Kirby and Robin Angus, in their Out of Many: One Love costume. -Patrick Planter

When the long awaited carnival road march came around, 'Vagabonds' and 'Lucys' ducked out of the mundane Sunday and took to the streets of Kingston to parade in fine fashion, ‘wukin up’ in the streets.

One of the highlights of any given carnival are the costumes, and Bacchanal Jamaica 2017, dubbed Spellbound, offered their jumpers a world of enchantment with an abundance of designs to choose from.

But some soca junkies had their own idea of what they wanted to look like during the road march, and decided to chip outside of the box in their custom made designs.

Stephanie Gregg and Victoria Colahar both opted to leave our green shores and explored our Caribbean neighbours, getting their beautifully feathered costumes specially made in Trinidad. Dekota Kirby and Robyn Angus, rocked their very own 'yardie' costume, called 'Out of Many: One Love'. Their costumes were like no other.

According to Kirby, they wanted to put their own stamp on the road and that was the reason they decided to design their own brand. She told The Gleaner, “I am very happy with the result. It makes us stand out in the crowd, and we love it.”