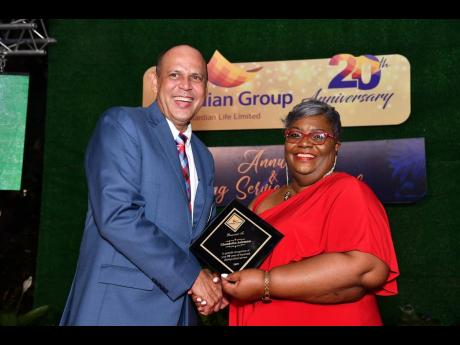 One hundred and twenty employees of Guardian Life Limited were recently recognised by the company at its 19th Awards Ceremony, held at the Sunken Gardens, Hope Gardens.

The event saw over 400 team members from across the island coming together to celebrate the company’s 20th anniversary and support those who displayed exceptional performance in 2018, as well as those who have been with the company since inception.

Crowd favourite, Mitzie Heywood, from the Investment, Accounting and Treasury Management Department, who received a long service award, was also named Divisional Employee of the Year and Overall Employee of the Year. Fay Hutchinson, Executive Sales Advisor, took home the President’s Trophy for Insurance Advisor of the Year, for the third consecutive year and also walked home with a Consistency Award, a Million Dollar Round Table Qualifier Award and a 20th Anniversary Commemorative Award for being the most senior, full time female sales team member with 100% quota.

In his address, Eric Hosin, President, Guardian Life Limited, expressed appreciation to the scores of men and women who have remained with the company since it was launched and commended their unwavering loyalty and commitment.

He used the platform to congratulate all Guardian Life employees for the exceptional work done in 2018, which saw the company achieving a consolidated net profit of $6.9 billion, the highest recorded in two decades.

Hosin explained that at age 20, Guardian Life was still pretty young, and would continue to be philanthropic and contribute to nation building.