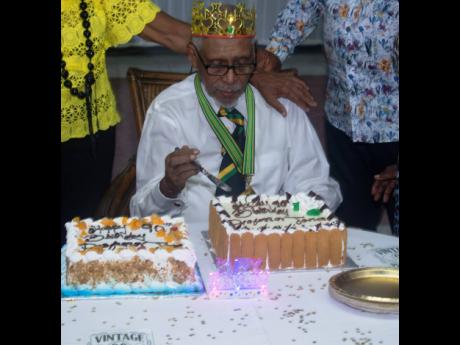 Contributed
The 'King' Professor Keith Barrington Jones about to cut his cake.

It was an evening of celebration for Professor Keith Barrington Jones, who was feted at his 90th birthday party at Mae’s Place in Pembroke Hall, Kingston last weekend.

Jones, Jamaica’s first virologist who formulated the typhoid vaccine in the 1950s and was also involved in the formulation of the polio vaccine, was celebrated by family members and friends, which included his brother, oncologist Dr Denis Jones; retired Notary Public his sister Shirley Jones; son, engineer Glenn Jones and the renowned reverend Mark Jones of the St Andrew Parish Church.

The Jamaican maestro in the field of science, who was awarded a Commander of Distinction by the Government in 2015, is credited for his role in establishing the micro-biology lab at the Bureau of Standards.

Having played a pivotal role at GraceKennedy in quality assurance, it was no surprise to see former chief executive officer, Douglas Orane and his wife Michelle, paying tribute to the veteran.