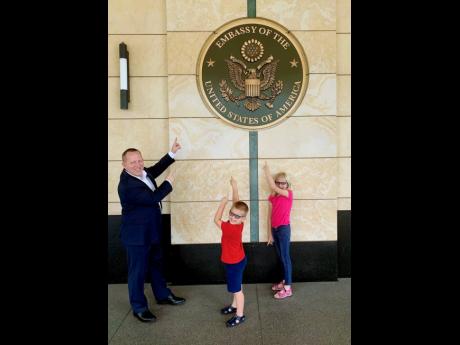 Contributed
McIntyre tries to include his children in his diplomatic duties at the US Embassy. That way, they have a better understanding and will accept when daddy has to go off to work. From left: John McIntyre and children, Ian and Emma, point to the US Embassy’s crest. 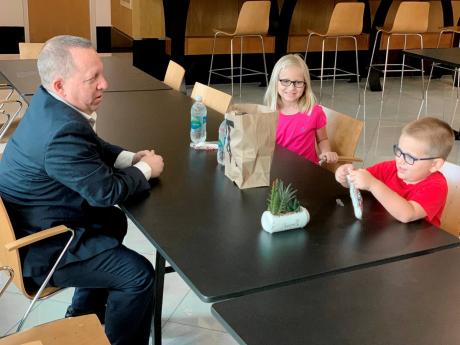 Contributed
The proud father looks on as his son Ian (right), gets ready to have lunch and his daughter Emma sports a radiant smile for the camera. 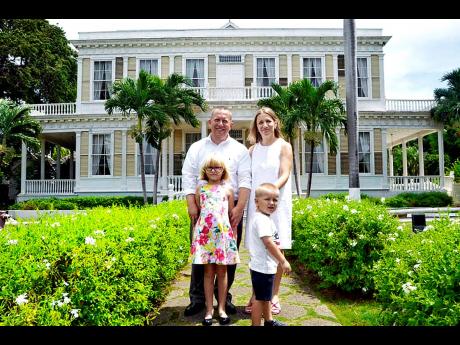 Contributed
Father of two John McIntyre (left) enjoys an afternoon out at the iconic Devon House, alongside his wife, Flora Zylfijaja (right), and his two children, Emma and Ian. 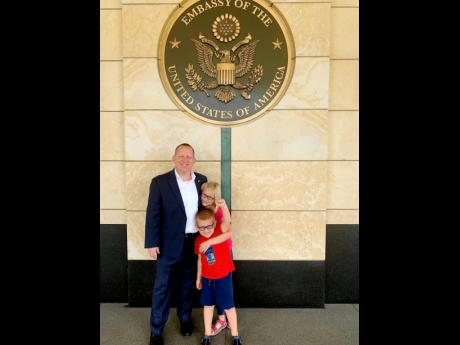 Contributed
McIntyre gets in some quality time with his children while at work.
1
2
3
4

“Fatherhood has given me a true sense of purpose,” John McIntyre, chargé d’affaires of the United States of America’s Embassy to Jamaica, told The Sunday Gleaner. Despite the many demands of his day-to-day diplomatic duties, McIntyre treasures the time he gets to spend with his two amazing children, Emma and Ian.

Being a father has presented a combination of scary, nerve-racking and exciting moments, he proudly admitted. And his role off the clock has given his life new meaning. When he first found out that he was going to become a dad, McIntyre and his wife, Flora Zylfijaja, were both working in Kabul, Afghanistan, at the time, “We consider Emma our Kabul creation,” he recounted in a recent interview.

Just like his professional career, he has found parenting to be a good learning experience, likening the journey to learning on the job. He confessed that he is fortunate that Emma and Ian are such good children. This makes raising them much easier than he could’ve imagined. “I have an amazing job, and I love what I do. But being their dad is fantastic. I love seeing them in the morning and when I go home. As a father, that’s my foundation. It has made me centred, and it is the most important thing in my life,” he said.

His biggest paternal lesson to date is patience. Because his children are growing each day, exercising patience is key. Going hand in hand with that vital element is energy. He believes that it is imperative for any parent, whether father, mother, grandparent or guardian, to manage the energy level of growing offspring. “My goodness, do kids have energy. It’s amazing!”

Because he functions as both a girl dad and a boy dad, he revealed that he has a different parenting style for each, which helps him to develop the most unique bond with his young ones. With Emma, McIntyre tries to be emotionally supportive; she is a talker, so he is keen on listening to her. While Ian, he admits, is a classic guy in some ways - he just wants to get things done. The fathering dynamic allows him to expand his nurturing horizons and hone his craft of dedicating time, effort, energy, and love to his team of two.

When asked how the children were adjusting to Jamaican life, he explained that they are both Caribbean babies, having spent most of their lives in Trinidad and Tobago, where he was previously posted, before moving with him to the land of wood and water. “I think the adjustment for us would be leaving the island. The Caribbean is where they really call home,” he added.

As his career progresses, the balance between family and career is harder. But the diplomat believes that it is important to carve out time for the family and the children, no matter what. “You just have to put the phone and the computer away and just make time for them.” To assist in bridging the gap, McIntyre has included his children in his embassy life as well.

“They know what the embassy is all about. So they are a part of this lifestyle which makes it easier for them to accept when I say, ‘I’m sorry, I can’t do something right now; I have to go into the embassy’. But I make it up to them later, and they know how to play me too,” he said.

When it comes to parenting with his wife, they apply methods and techniques that complement their skill sets. There’s a division of labour in the morning routine, and it works for them. As far as fun activities go, each child wants individual quality time, so he meets that demand, taking them separately to build that one-on-one bond. As a family, they also love the great outdoors and enjoy travelling together. The diplomatic dad confessed that his children might be the only ones in the world who love going to the airport.

His advice to new fathers is to exercise patience, be prepared for the energy and realise that as priorities come and go, being a parent is at the top of the list and definitely worth it.