Pageturner dishes on Yanique – ‘She loves to cook, and eats what she prepares’ 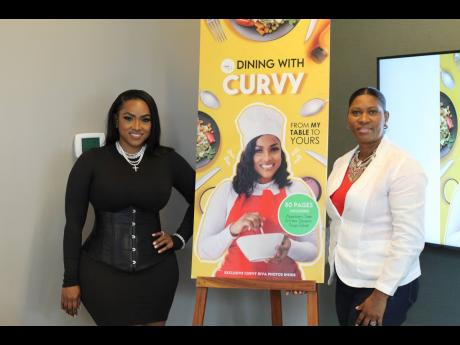 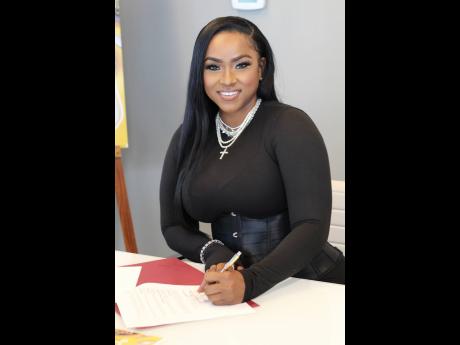 Contributed
Yanique ‘Curvy Diva’ Barrett signs off on the publishing deal for her first cookbook, ‘Dining With Curvy – From My Table To Yours’. 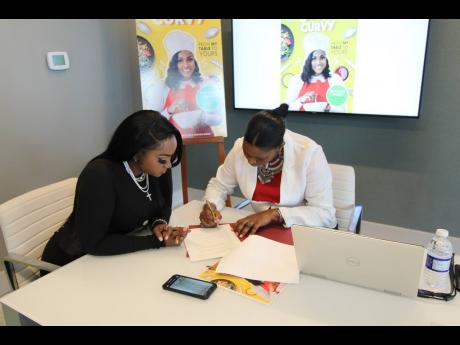 Pageturner Publishing House Limited is the medium through which television host-turned-recording artiste and restaurateur Yanique 'Curvy Diva' Barrett will publish her first cookbook, Dining With Curvy – From My Table To Yours.

Living recently caught up with Ingrid Abrahams Larmond, chief operating officer (COO) of Pageturner, who was only too happy to dish on Barrett, and it was all good. At the end of March, they signed off on the publishing deal, and since then, it has been a whirlwind of activity for Larmond, whose company is publishing its first cookbook. Pageturner, whose flagship publication is Teen Vybe magazine, has previously published books for Macka Diamond, Ken Boothe, Miss Kitty and D'Angel, as well as the title Dudus: Jamaica's First President.

“There is just so much logistics for this book,” Larmond told Living. “It will have advertising from corporate sponsors, some of whom will do wine pairings; CB is definitely on board and so, too, is Copperwood Pork and Wisynco. And we have to cook all the meals for every recipe, 32 in total, comprising appetisers and entrées, to desserts, soups and salads. And we have to take pictures of everything. It's a lot of work.”

But she is clearly relishing it. Plans are also in the making for an islandwide and international book-signing tour – with all protocols observed, of course – because Larmond sees this as an essential ingredient in promotion and sales. An author herself, she published her first book under the guidance of her husband, Karl, who is the real guru in the field. Larmond actually started out by assisting her husband in the business, while living in Florida, and subsequently caught the writing bug. She has had the opportunity to travel as far as Africa with Macka Diamond for book signings when promoting the dancehall diva's title, Bun Him!

“Right now, we are getting our retailers on board and making sure that we will have enough books in each store, and for each stop that we make along the tour. We will be mailing orders, both locally and overseas, and we are getting special-coloured envelopes for this. There has been so much gloom during this COVID period that we want to brighten up lives in whatever way possible,” said Larmond, whose company publishes school yearbooks, magazines and annual reports, and has since found a niche in making COVID signs and protocols handbooks for schools islandwide.

“We are also doing a photo shoot, so there will be some exclusive photos of Yanique in the book, and we will be having the official launch at her restaurant, so she has her hands full,” she added.

However, apparently the Curvy Diva understands the assignment only too well. Larmond praised her admirable work ethic, pointing out that Barrett is totally focused on work and never shies away from a challenge. She even still seemed a bit bemused by Barrett's undeniable prowess in the kitchen.

“Yanique can really cook, and she loves to cook. We went to her house for a meeting, and I asked her if she had any snacks we could munch on. She was like, 'I don't snack when I am hungry; I cook.' Well, we were there for about three hours, and can you believe that Yanique cooked three times for us, and when we were leaving, she was getting ready to prepare her own dinner. She cooks well, and she loves to eat what she cooks,” Larmond stated.

Pageturner CEO Karl Larmond says he “wants everyone to not only be excited about the book, read the recipes, and eventually try them on their own, but we are aiming to make the tastes from Dining With Curvy resonate in your mouths”.

Dining With Curvy – From My Table To Yours will be 80 pages in full colour.