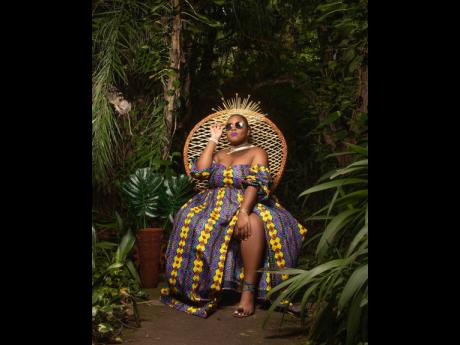 Stacy Brown
PHOTO ABOVE: With a pose of confidence, Nurse Annique Hamilton made a statement with her birthday photographs. 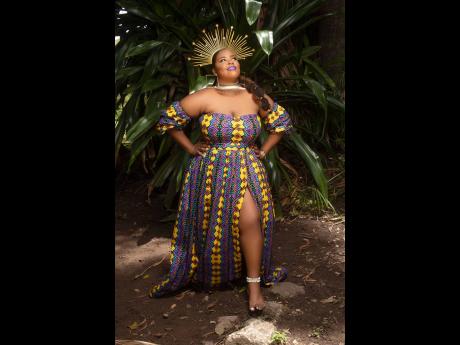 Stacy Brown
The shoot had a regal theme, specifically an African/Nubian queen influence.
1
2

Annique Hamilton got a special surprise for her birthday.

The nurse, who has worked at the University Hospital of the West Indies for the past 10 years, was given the regal treatment July 18 after she was surprised with a photo shoot by her loved ones.

“She’s normally a straight workaholic, work, work, work; so it’s a chance for her to let down her hair, so to speak, and just be celebrated through photographs. We appreciate her, we see how hard she works, and we’re going to celebrate her through the photo shoot, and that is what we did for her. Many times, nurses go uncelebrated; they’re more unsung heroes,” said Matthew Ferguson, Hamilton’s partner, who took part in setting up the photo shoot.

Stacy Brown, Hamilton’s high-school friend and the photographer for the session, spoke glowingly of her pal. “If I were to speak based on just her character alone, I would feel very comfortable to be in her care, because you know those persons who just have a natural, nurturing persona? That’s her, and she has the type of persona that regardless of your class, the colour of your skin, regardless of whatever it may be, she will be very kind to you; she’s not biased or judgemental,” Brown said.

Hamilton was inspired by her mom to enter the healthcare field. Initially, she had an interest in computer science, but her mother thought she would be a good nurse because of her humility and the level of care she shows to others. When she started her career as a nurse, she found that it was something she loved, and that even though it had both bad and good times, the good times were so good that it is worth it. With the ongoing COVID-19 pandemic, her work environment has changed dramatically, but Hamilton has persevered and continues to go above and beyond as a frontline worker.

She said the photo shoot made her feel like she was on “cloud 10”, especially because it came as a surprise to her. Hamilton said she had long considered doing a shoot and even had her concept, but didn’t think she would find the time.

“I was excited but at the same time not sure, because how the pictures are gonna come out, ‘cause, I mean I don’t know how to pose for pictures, ‘cause normally I see people [doing] photo shoots and, like, it’s so awesome and like the pose is on point. But I don’t do well with poses, so how is it going to work out for me? But, surprisingly, it came out well. Funny enough, the photographer had an idea, and she decided to get the chair, the woven chair, and I’m like, wow, she did that just for me, so I was like out-of-the-blue shocked,” she told The Gleaner.

The photo shoot had a regal theme. Coincidentally, an African/Nubian queen influence was Hamilton’s original plan. It was her first time doing a photo shoot, and being a plus-size woman, she was nervous about how they would turn out, but during the process, she began to relax and felt like she was on top of the world.

“When I had on my dress and my crown, and I did my make-up, and people were just complimenting me, I was just like, wow. It was just so awesome. I was there just feeling on top of the world; it was a happy moment,” she shared.