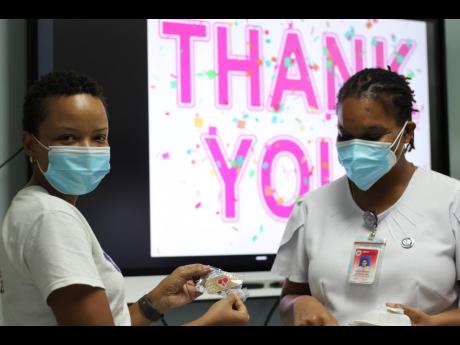 Stephanie Lyew
Angella Byfield (left), a member of the Preemie Foundation of Jamaica, gives an ID pin to Nurse Shelly Latchman as she collects her lunch during the treat. 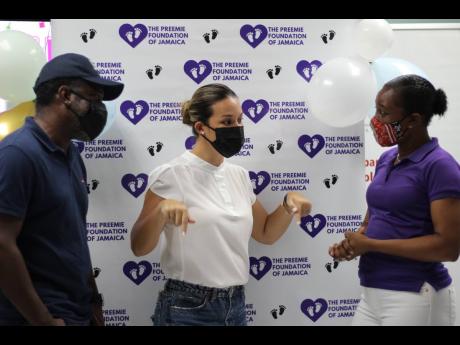 Stephanie Lyew
Entertainers Wayne Marshall (left), and Tami Chin Mitchell are engrossed in a conversation with Serika Sterling (right), founder of the Preemie Foundation of Jamaica. 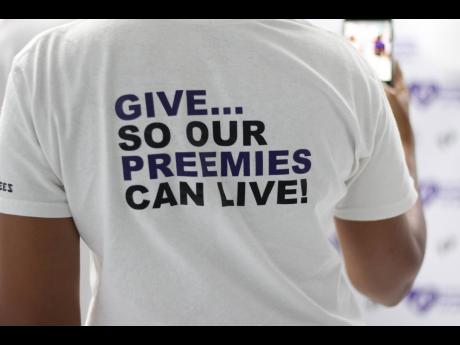 Stephanie Lyew
The back of the Preemie Foundation shirt encourages volunteers to donate. 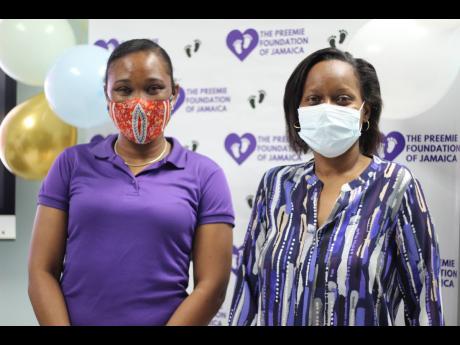 Stephanie Lyew
Founder of the Preemie Foundation of Jamaica Serika Sterling (left), shares a frame with Dr Blondell Crosdale during a treat for the staff of the Neonatal Intensive Care Unit at the University Hospital of the West Indies.
1
2
3
4

When Serika Sterling’s triplets were born premature at only 27 weeks, little did she know it would be the start of a long journey in the Neonatal Intensive Care Unit (NICU). Two of her three sons did not make it, she says, but her time at the hospital opened her eyes to life behind those doors and the investment required to keep babies alive and parents aware.

“My babies were born alive, but two of them did not make it. Eli passed after five days, then Adam, within two months. It was immensely difficult. Being with Seth, who spent four months inside the NICU, made me realise the frequency of – and how many – babies end up there, as well as how many really make it,” Sterling told The Gleaner.

She added, “I was like, something needs to be done; and I said, you know, one of the ways I can ensure this situation does not remain a negative experience is by contributing to something to help minimise the impact on families who will have to utilise the facility in the future. I don’t want my children to go through what I have, so it was best to start building a community that can make a difference now.”

There, Sterling gave birth to the Preemie Foundation of Jamaica (PFJ). She wanted to build a community to support parents of premature babies and their families, and the “unsung heroes” of the NICU. Last month, Sterling and her team launched another initiative to treat the staff within similar facilities.

“The doctors and healthcare workers are there making wood out of stone in those NICUs and in the nurseries as they try to save lives, and sometimes, they don’t get enough appreciation for what they do. As a parent, when your child is sick, the focus is hardly ever about showing appreciation; [the] truth is, you don’t know what they’re doing, trying to understand, and I felt like this is a step in creating a community,” she said, as she interacted with various members of the administrative and medical staff.

Currently, the foundation has several initiatives running concurrently, including their oxygen and blood drives specifically for the NICU. They also aim to donate oxygen concentrators, which cost $200,000 each, to hospitals across the island.

“One hospital informed us that they wanted about 20 oxygen concentrations. We know we could not supply that; however, we have done the research, found a supplier and paid a deposit. We are happy that through Toyota Jamaica, who partnered with us, providing us with transportation for our hospital visits, we have been able to carry out tasks we set out to do, such as treating the staff,” she said.

“Also, for them connecting us to The Mitchells – Tami Chin Mitchell and Wayne Marshall – who genuinely want to help and have donated to us an oxygen concentrator, plus shared our story via their vlog, the response has been overwhelming, and we appreciate it all,” Sterling continued.

With the mandate to provide equipment and a support system for parents; inspire more medical research on prematurity; and educate, innovate, and drive awareness on pre-term labour issues, Sterling is determined to meet their goals.

The foundation’s mandate moved the Mitchells, and through Toyota Jamaica, of which they are ambassadors, they learnt about its latest initiative and came on board.

“Serika’s story is touching. If you don’t know it or haven’t heard it, it’s incredible she is even here. So, when she invited us to learn more about the foundation and what it does, and find out what more is needed [for] the nurses, doctors, mothers and fathers, [we had to be here], because the experience is not about the preemies, but what they go through after,” Chynn said.

Wayne Marshall chimed in, “You can see the worry and the fear for a premature baby. As the doctors say, every baby [is] different; what they need is different, so we are just happy to show support and shed light on the foundation and show that a lot more help is needed.”

Consultant neonatologist Dr Blondel Crosdale said that UHWI’s NICU has been managing and implementing new ways to ensure the safety of the children; however, they would be appreciative of any support the unit receives.

“We have had to adjust tremendously in the pandemic. We developed a high-dependency unit, so if the status of the mother is unknown, the babies are put there and once negative, they come upstairs to the NICU. Both parents are screened – through tests every week – and they don’t get to interact with other parents any more,” Crosdale explained.

“The NICU is always in need of ventilators, oxygen, SAT monitors and glucose monitors. It has a capacity for 30 babies, but we don’t even have [a] quarter of that in equipment. While we are managing, more can always be done,” the doctor continued.

The foundation is about to launch another initiative at the Princess Margaret Hospital to renovate a section and have it retrofitted as a NICU or special care nursery. It is estimated to be a$15-million to $20-million project.

To learn more or to contact the Preemie Foundation of Jamaica, visit the website preemie.sasjm.com, or call (876) 665-1210.