Uniformed in love – Essential workers say ‘I do’ 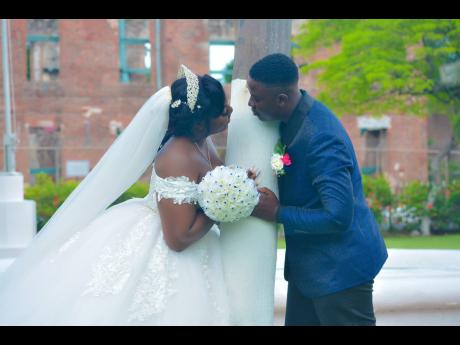 Contributed
The newly-weds stare longingly into each other’s eyes, like they did on their first date at the beach. 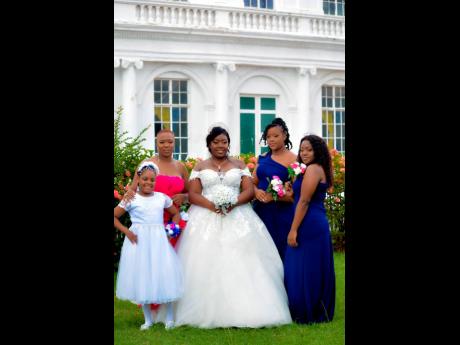 Contributed
Monique was excited to be joined by her wonderful bridesmaids. From left: Flower girl Junique Daley; maid of honour Trecia Boothe, and bridesmaids Shanice Reid and Natalia Reid. 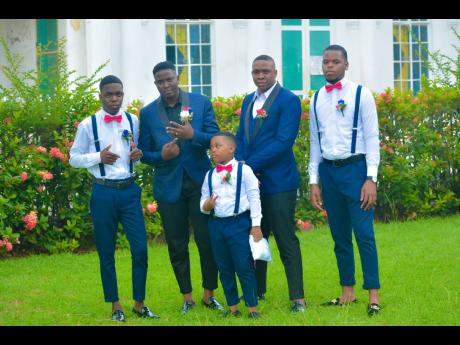 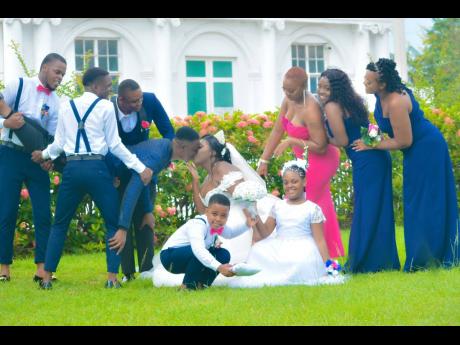 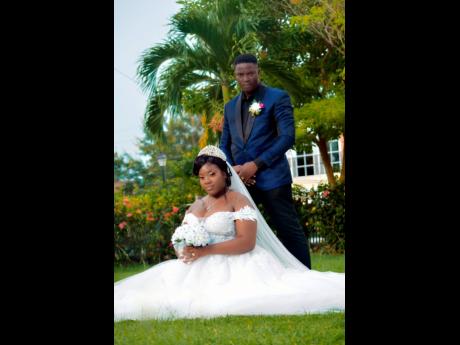 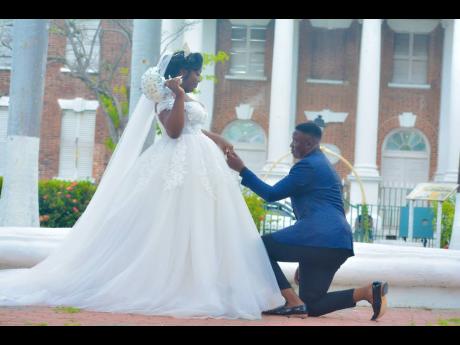 Contributed
This queen is given the royal treatment by her king. 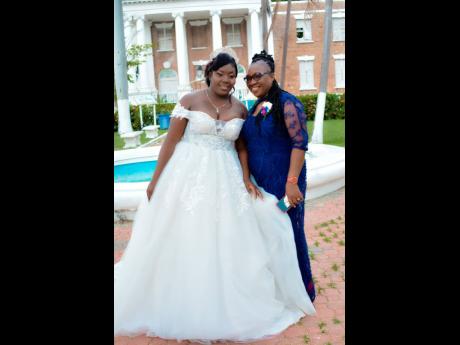 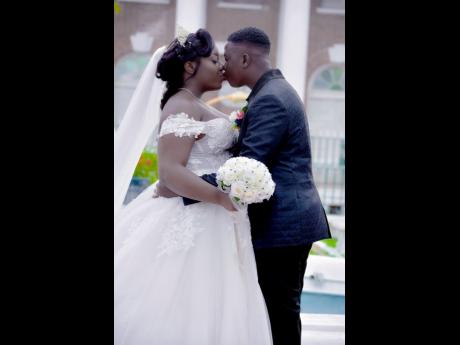 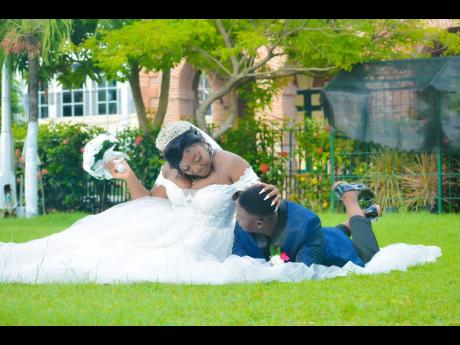 They say women love a man in uniform. But Monique Grant was definitely caught off guard when she was stopped by the police, and Dawneric Reid, one of the uniformed officers, who was on his last duty for the night, began to ask her a few questions. She responded in a fiery manner, and he found himself arrested by her alluring beauty. She would soon be cuffed by his kind heart and make their love legal in holy matrimony.

It was a Friday night in Linstead when Monique was heading home from her usual start to the weekend: skating. Trying to beat the curfew on foot with a friend, they were approached by two police officers in a vehicle. “At first, I was scared because of the hours, and upset, too, because they were asking too many questions and there were no taxis on the road,” she explained to Island Wedding. The officers offered the walking duo a drive home, and while her friend turned down the request, she obliged without hesitation; all she wanted was to get home.

Dawneric, who recalls that fateful night down to the date and the hour of their first encounter (September 7, 2019, at about 10:30 p.m.), was happy to assist two women who needed to be home at that hour. He was, however, only attracted to one: Monique. “She said she was a nurse, which was my dream girl’s job, and that piqued my interest. While carrying her home, the other policeman was speaking to her, and she didn’t reply to him. So I started asking her some personal questions, which she answered in a dry and dull tone. I continued to sweet-talk her, and she replied that she doesn’t date cops,” he revealed.

Convincing her that not all cops were bad news proved futile, as the nurse appeared headstrong in her beliefs. But underneath it all, Monique was blushing at the law-enforcement officer’s valiant efforts. He asked for her number and was in for a pleasant surprise when she gave him her digits. Arriving at her house safely, she could feel his piercing eyes looking at her.

A flattered Monique, catching wind of this added attention, placed a little extra rolling depth in her step while she made her way indoors. “There in the light, I was able to see her beautiful face and her thick, firm, curvy body and decided I had to know her more,” Dawneric admitted.

Because the officer was trying so hard to impress, this nurse didn’t take him seriously. She thought he was too good to be true, “I didn’t trust him one bit,” she confessed. So, how exactly did he change the narrative of this story to one of unwavering love? Two words: patience and persistence.

“She is a strong, independent lady in her career, having her assets and all, so she probably didn’t need a man. Something in her voice, however, indicated that she had been hurt before and had created an outer shell to protect herself. But she had a lot of love to give,” Dawneric observed. With that in mind, he asked his future beloved out on a date.

Their first date made waves of impression for Monique. Shy and anxious at first, her date shared in her reserved feeling, which helped put her mind at ease. They sat down to a beautiful night of dining and talking by the beach, building a greater level of comfort between them. Before they knew it, they took the festivities to the water, ‘splish-splashing’ in the merriment of the occasion. And to top it all off, they dabbled in a sea of romance by watching the sunset together.

After weeks of open communication and frequent conversations, the pair discovered that they shared similar interests, morals and values. “We both want the same things. Our families are the same; it’s like we know each other from another life. We connect on every level. We are soulmates, so we decided to give it a try,” the officer said. One year and nine months later, the officer asked his nurse to be his wife.

On her birthday, he broke the sad news that he would be working out of town. All the while, he was writing up his departmental leave to plan a romantic rendezvous for two. “I made preparations for the hotel room to be decorated for us. After [checking] in and heading to our room to unpack, she opened the door and turned on the lights, following the path of rose petals.” Shocked out of this world, she turned around to see her husband-to-be on his knee with the ring, asking her to spend the rest of her life with him.

Monique, of course, said yes. “It was the happiest day of my life. I was on top of the moon, nervous yet excited. It was special, and I enjoyed every moment of it; all that I’ve dreamed for and more,” the bride-to-be reflected.

The engaged couple went with a wedding planner, planning their big day in two months.

The process was stressful and difficult, especially because only 25 persons were allowed to attend due to the COVID-19 protocols. It was all worth it when they said ‘I do’ on October 2.

Adorned in an ivory-coloured off-the-shoulder wedding gown, courtesy of Luxbride Ja, the beautiful bride floated up the aisle at the Lighthouse Assembly in Spanish Town, St Catherine, to meet her suave husband, suited in blue and black. Surrounded by family and friends, the two exchanged vows, promising to love and cherish each other for the rest of their lives. “My wedding day was surreal. I was amazed by all the support and love we received. My favourite moment was seeing my husband crying when I was walking with my dad up the aisle,” the bride revealed. Expressing that the wedding was the best day of his life, he shared his bride’s favourite moment.

The newly-weds danced for the first time as husband and wife to Pink Sweat$’s At My Worst, and it was a magical experience for the partners in love and their happy audience. “When I held my husband’s hand, and the song started to play, I looked him in the eye, and we were transported to the moon. The world stood still, and I just melted away in his arms,” Mrs Grant-Reid reminisced.