Meet The Bromfields From high-school sweethearts to husband and wife 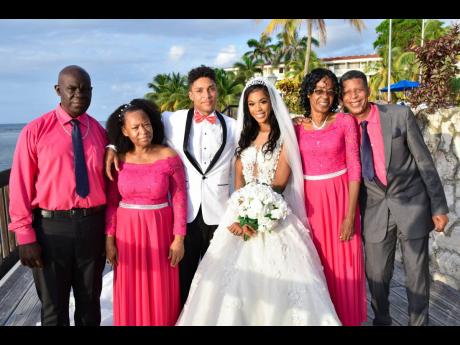 Contributed
The couple is joined by their parents: Mark’s parents (from left) Hander Nain and Helen Walters and Naedine’s parents Pearline and Bevan Dawson Sr. 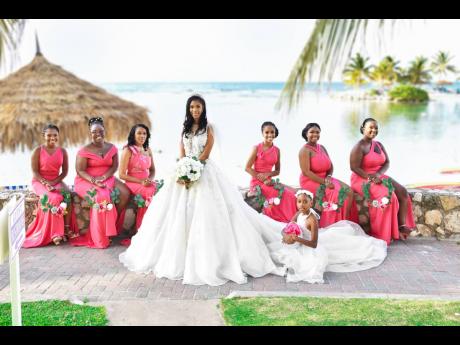 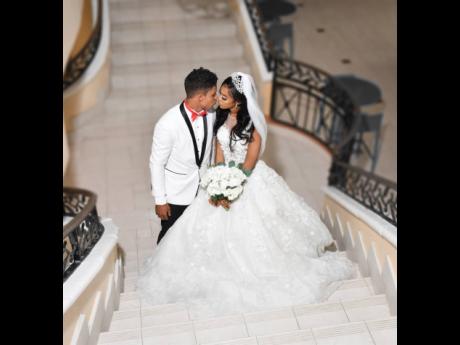 Contributed
The Bromfields lean in for a kiss at a stairwell at Montego Bay’s Holiday Inn Resort where they wed in July. 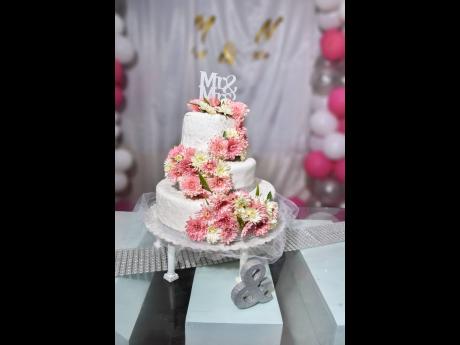 Contributed
The couple’s three-tier cake was embellished with flowers to complement the pink and white theme. 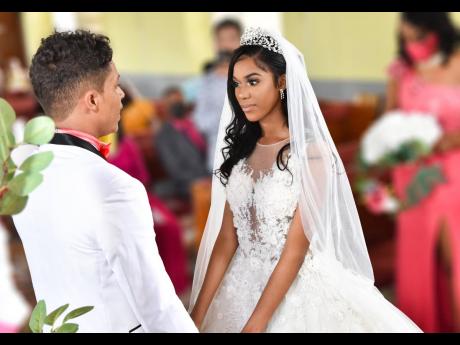 Contributed
Mark and Naedine stare into each other’s eyes as they make the first step into a lifetime together.
1
2
3
4
5

Institution is a symbolic theme in the relationship of Mark and Naedine Bromfield. The couple met as sixth-formers while attending York Castle and Westwood High School, respectively, and strengthened their relationship while studying at the University of Technology.

Having graduated together last month, they prove that “the couple that studies together, stays together,” or as Naedine personalises, “We’ve finally earned our bachelor’s degree in relationship studies.” With such qualification, they decided to institutionalise their own union through holy matrimony in July, six years after they first laid eyes on each other at a after school jam.

“He sounded and looked intelligent,” Naedine, 24, recalled. “He also looked charming that day.”

Mark, 25, echoed, “She was very easy to talk to. She spoke so eloquently, not to mention how very stunning she was.”

They exchanged numbers and indulged in the teenage delight of texts and video calls for eight months. But butterflies brew and feelings grew, so they decided to on a date.

“I initiated for us to go somewhere fun and the perfect opportunity popped up, as she was going out with her friends to the movies and she asked me to come,” Mark shared. “I was always a part of the girl trips, as that was the only way for us to hang out. We watched a movie at the Margaritaville cinema in Ocho Rios, got food at Pizza Hut and headed home.”

They ultimately made it boyfriend-girlfriend official and started college almost two years later. This was new yet exciting terrain for the couple, who were dorm neighbours for four years.

“Being on neighbouring halls really helped our relationship to continue to flourish because we spent theajority of our time together,” said Naedine. “During this period, we literally grew together in so many ways. We improved our communication skills, experienced new places; we actually felt like husband and wife already, which everyone referred to us as, because we never left each other out in anything we’re doing. This brings me back to the point of why I am happy for establishing a friendship first. We were literally best friends and balanced our relationship with school well.”

It also gave them an inkling about cohabitating, as they cooked together, saw each other daily, and went on more dates. Mark knew Naedine was the one because she was the first person he wanted to share anything with, while Naedine deemed him her person because of how he tended to her needs, even those unsaid.

A year before he proposed last November, Mark was already considering the details to pull off a fine engagement, consulting with his parents and sister. For him, marriage was a natural progression because of their love and dedication throughout the years, and he already knew she would say yes.

“I left home at approximately 1:30 p.m. to arrive at the Plantation Smokehouse restaurant, where she was with her friends,” he shared. “I approached her in a room full of people and popped the question, and the rest was history. It was so fitting to start our marriage how we started our relationship: me tagging along on her girl trips.”

They wed at an intimate ceremony at Montego Bay’s Holiday Inn Resort, bits of which are documented in a video on their YouTube channel. The pink-and-white occasion saw them both playing integral roles in the planning, as they had long daydreamed about the big day from the start of their relationship. John Legend and Jhené Aiko’s U Move, I Move was the soundtrack of this daydream-turned-reality when they did their first dance as the Bromfields. It stands as Mark’s most memorable moment of that day.

They ‘turned up’ too, doing their own two-step to Master KG’s Jerusalema and “flairy-ing away” with their wedding party.

“The energy and vibe were just right, from the start to finish,” Naedine said. “I enjoyed it all and was definitely the happiest I have ever been, because my decision of choosing him forever finally came true. It was amazing to see how proud and happy our families and friends were. The most memorable moment for me was looking at Mark during our first dance and knowing that I made the best decision. It was at that moment it finally sinked in that we were now husband and wife.”