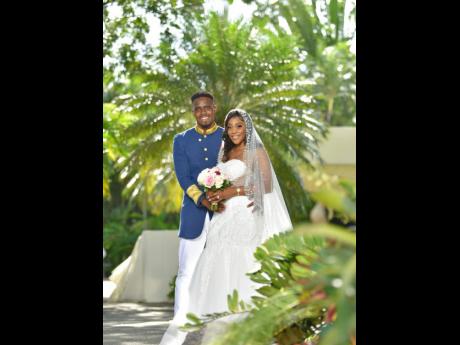 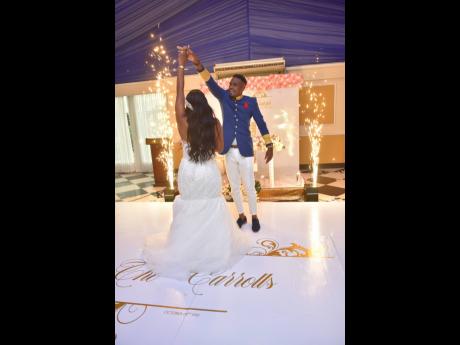 Contributed
The newly-weds share their first official dance as husband and wife. The groom surprised his bride with flares to add magic and excitement to the dance floor. 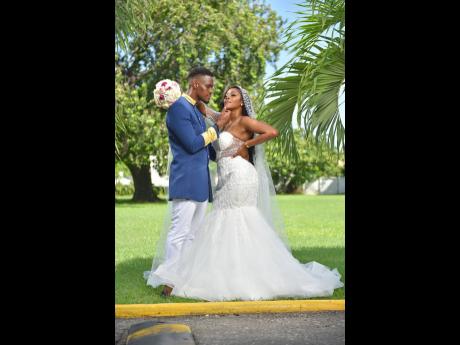 Contributed
Every good king deserves a good queen. Together, the Carrolls are a reigning royalty of love. 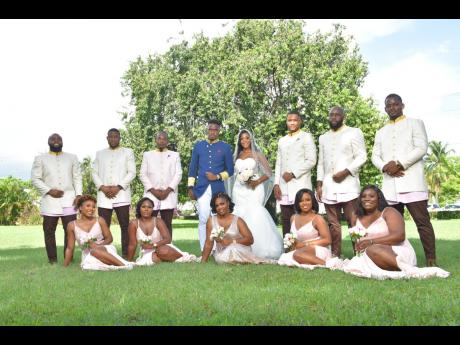 Contributed
The Carrolls were grateful for the support from their bridal party. 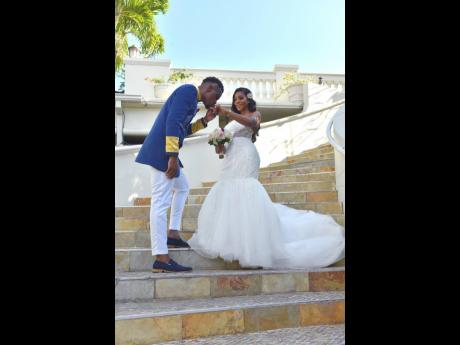 Contributed
Rudolph places an enchanting kiss on the hand of the woman he loves. 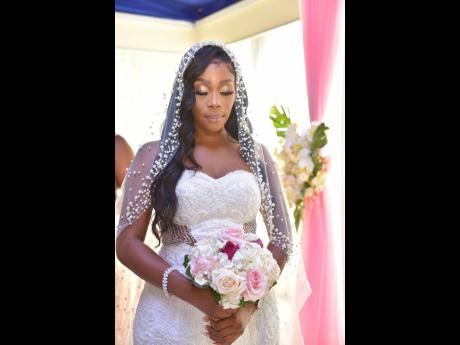 Contributed
The beautiful bride taps into her spiritual side during the formal proceedings. 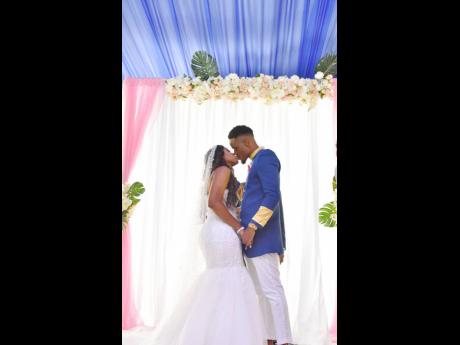 They say never mix business with pleasure, but working at the same agency does have its perks. Just ask Latoya Crawford and Rudolph Carroll. The pair might have first crossed paths under professional circumstances, but the office allowed them to discover something much greater than their nine-to-five duties: unconditional love.

Initially, Latoya saw Rudolph as nothing more than just a co-worker. That feeling was mutual for Rudolph, who thought she was too ‘bougie for his taste. But everything changed in January of 2015 when they did a site inspection together for work. “We spoke for the first time, and I realised that she was cool. I started to develop a liking for her,” he told Island Wedding. He made his intentions known in August of that year. Accustomed to attention from older suitors, Latoya’s immediate thought was, ‘Why is this young man expressing interest in me?’ But her heart softened by his kind, sweet, gentlemanly and mature demeanour.

He went above and beyond, even helping her with her master’s thesis. After discovering that he was doing nothing for his birthday, she suggested that they go for drinks. The special occasion also marked their official first date. “When we went to Macau, we bought some drinks and spoke on topics we don’t usually talk about. He shared his interest again, and we had our first kiss there. It was nice,” she revealed, noting that they have made going to Macau together on his birthday in September a tradition.

Latoya remained hesitant throughout the courtship, but everything changed on October 9 of that year. He picked her up from a meeting with friends, and it was there that he was introduced as her boyfriend for the first time. That sealed the deal, and the relationship has sailed smoothly ever since.

God-fearing, beautiful, sexy, fun-loving, meticulous and dedicated, Latoya has helped her beloved to improve his relationship with God, which he is grateful for. “She challenges me to become better — a better person, a better man, and now a husband,” he shared. Kind, no-nonsense, smart, determined, goal-oriented and a man of integrity, Rudolph was always supportive of his significant other’s pursuits. “He is always pushing me to be [a] better me. He has assisted me professionally, financially and spiritually. He has done so much for me, and he has been my rock,” she added. But for Latoya, Rudolph’s stellar efforts in planning a surprise birthday party for her in 2016, where he invited all the important people in her life, including those who weren’t even aware of their relationship, continues to be the icing on the cake that is their love story.

With Rudolph being a marine biologist and Latoya an urban planner, the pair share environmentalism as a common factor and love the great outdoors. They go on tours, hikes and travel together, whether it is a good drive out of town or an adventure overseas.

Four years after dating, Rudolph decided that he would ask Latoya, the love of his life, to be his wife. “My heart was most at peace with her, so that was where the decision came,” he said. He proposed to her in November of 2019 at Puerto Seco, where he developed a fondness for her on a work trip in July of 2015. He took her back to the first memory and popped the question while they were both in the pool. “If he wasn’t there, I would’ve drowned,” she said with a laugh. But it was a big surprise for her, and a magical experience.

The engaged couple planned the wedding with the help of one other person, so the process was hectic. There was a lot of back and forth, creating the vision in a matter of months. The wedding dress was a smoother experience. She said yes to a gorgeous mermaid silhouette dress from LuxBrides Ja. “It was my first and only stop. The dresses are cutting [edge]; the designs are to die for, [and] the quality is exceedingly good. And the customer service – wow! Samantha (Robinson) is beyond understanding and accommodating, as far as making the dreams a reality,” the then bride-to-be declared.

On October 9, Rudolph and Latoya were joined in holy matrimony in the Venetian Suite of the Terra Nova All-Suite Hotel in Kingston. The bride, late in her arrival, was captivating and breathtaking in her dream dress. Reducing the number of guests and limiting the love celebrations to adhere to the then 6 p.m. curfew aside, the day was simply magical. From Rudolph surprising Latoya with the in-person performance of saxophonist Verlado Small, who played while she walked up the aisle, to the flares used during their official dance as husband and wife, the Carrolls definitely rang in love for the season, reason and a lifetime.