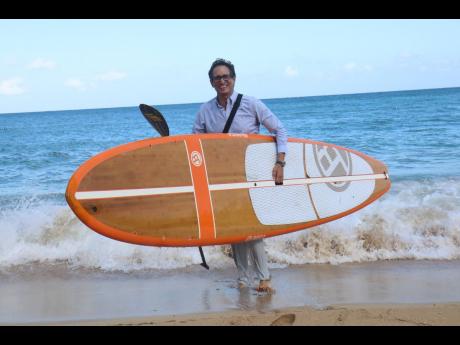 Ashley Anguin
Kyle Mais with his carbon fibre lightweight paddleboard, made from bamboo, which he uses some mornings to make his way to work. 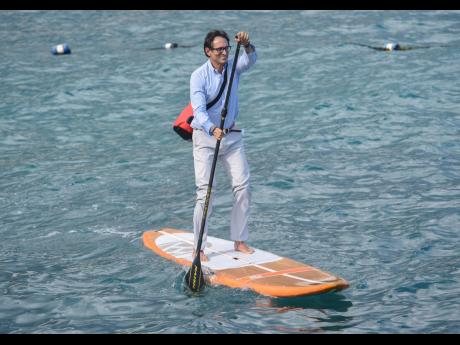 Ashley Anguin
With his bag on his back carrying his cellular phone, laptop and shoes, Mais says travelling to work via paddleboard is like ‘riding a bike’.
1
2

With his knapsack on his back carrying his cellular phone, laptop and shoes, Kyle Mais is taking the reduction of carbon footprints to the next level by paddleboarding to work some mornings.

The Jamaica Inn hotel general manager and avid environmentalist uses a carbon fibre lightweight paddleboard made from the bamboo plant to guide the waves he encounters along the Ocho Rios coastline en route from his home to the resort.

“What a great way to get to work and what a great option, particularly, these days when societies and civilisation have resulted in the traffic jams and CO2 emissions,” the Kingston-born, Campion College past student shared.

When he uses his car, it can take up to 15 minutes depending on the traffic, and when he paddles or swims, it takes between 15 and 20 minutes based on the wind pattern and how rough the sea is, he tells The Sunday Gleaner.

“Sometimes I actually swim, and that takes a little more time. But then I can’t carry my phone or my laptop,” he quipped.

The length of the trip is a little over a kilometre. Obviously, not as quick as going by road. Mais says it is certainly a much more beautiful view and much more scenic.

Outside of his love for the paddleboarding to work, Mais, one of the architects behind the White River Fish Sanctuary, a success story for fishers and the reefs in the St Ann area, says it is a great form of exercise, which allows him to avoid adding to the increase in the use of fossil fuels.

“By using this means of transport, I’m helping to do some good for the environment at least once or twice a month and get a great start to the day in the process,” he stated, while in the same breath inhaling what he describes as an amazing coastline.

And although the five-year-old sanctuary is protected by fishers employed as wardens, Mais says while paddleboarding, he gets a good view of what’s happening on the water and can literally see the corals, fish or anything else going on in the background.

With an investment of time, money and dedication by a number of stakeholders in the parish, the sanctuary has seen tremendous growth in the fish population since its inception, and is hoping to live up to its promise of a 500 per cent increase in the fish biomass in five years.

They had also set out to plant 5,000 pieces of coral on the reefs that had been depleted and destroyed by hurricanes, disease or bleaching from global warming.

Aside from running one of the most beautiful hotels on the island, Mais said he understood how important it was to repopulate and resuscitate the reefs.

There are mornings he has to fight with the waves, and on the morning The Sunday Gleaner ‘rode’ with him on the open water, the waves were much higher than normal, and the wind was troublesome, and yes, Mais almost fell off his paddle twice, but the expert he has become showed its face.

He has fallen off many times, he admits, accepting it as part of the fun.

“One has to practise; it’s like riding a bike,” he explained, adding that the more you paddle, the more confident you get and more balanced.

“There [are] a lot of different sizes if anybody [is] looking at wanting to start paddleboarding. It’s quite popular now. And the next thing too [is] yoga on a paddleboard because it’s unstable somewhat, so you get a better workout.”

From a beginner through to a professional, one can challenge themselves based on the size of the board. Bigger boards obviously [have] more value, more stability, while the smaller boards are much faster, but less stable, so one has to work harder, he noted.

Jamaica Inn, he says, has all sizes of boards for the guests, so they can start out as beginners.

He uses the paddleboard to go snorkelling as well. He stated that the sport is becoming very popular, and he is seeing so many more people going out in the mornings kayaking and surfing.

“COVID has taught us a lot of things, and one of them is that our health is important, and so this a good, healthy way to start off the day and get you to work.”

Paddleboarding, he says, builds the core, and the body uses up a lot of different muscles that people are not accustomed to using all the time.

“So you do need to have a very good strong core, relatively speaking, depending on how far you are going and the waves, as your muscles in your legs are firing differently, to keep you stable.”

Mais’ environmental consciousness has paid off over the years. Under his watch, the Jamaica Inn was recognised with the RJRGLEANER Communications Group Hospitality Jamaica Award in 2019 for offering an eco-friendly environment to his guests and the country.