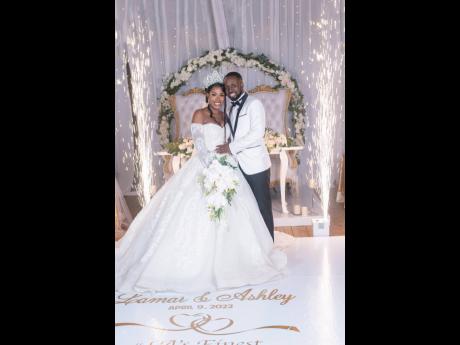 Ksvideographyandphotos
With a royal love like the Whittles, sparks are bound to fly. 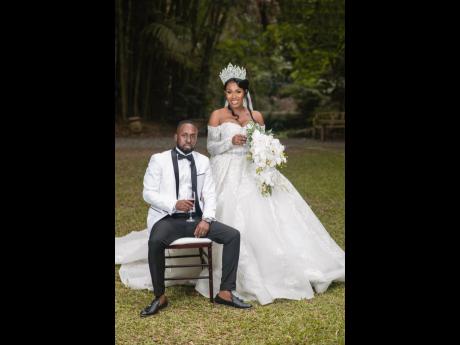 Ksvideographyandphotos
First, they were strangers, then they were neighbours. Later they became lovers, hearts’ desires, and always and forevers. 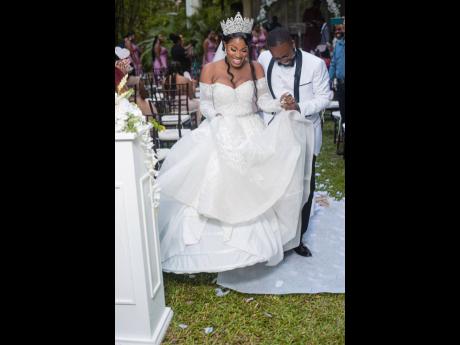 Ksvideographyandphotos
A chivalrous Lamar guides his royal bride, Ashley, down the ailse after exchanging vows and saying ‘I do’. 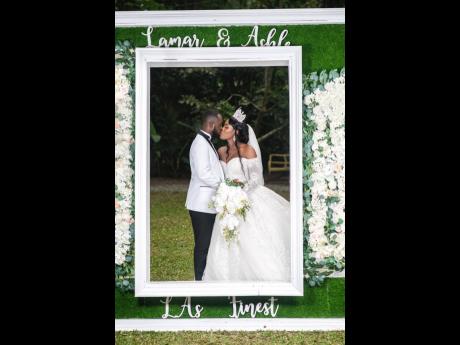 Ksvideographyandphotos
The look of love, a majestic kiss; that’s the picture of LA’s finest. LA? 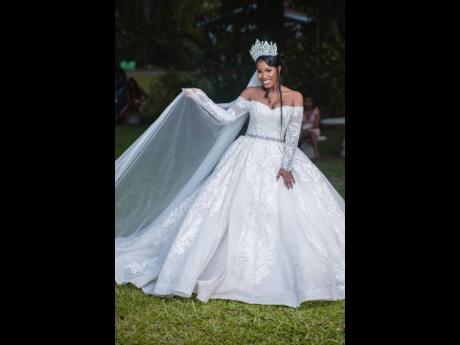 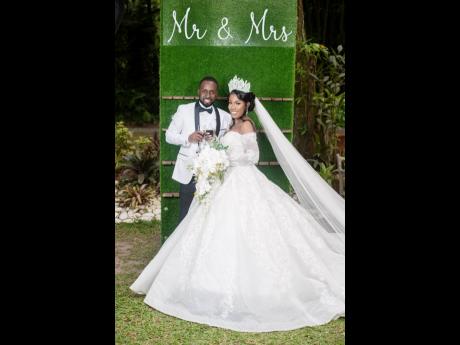 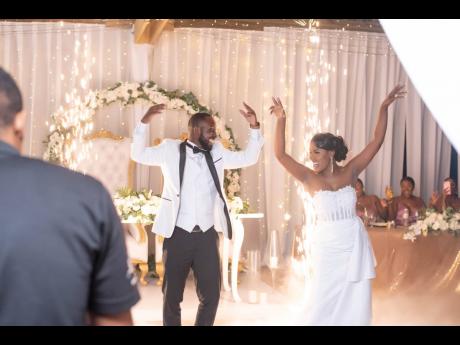 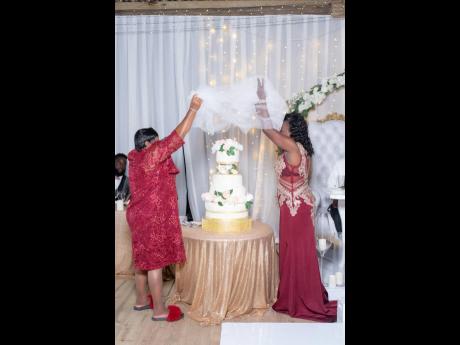 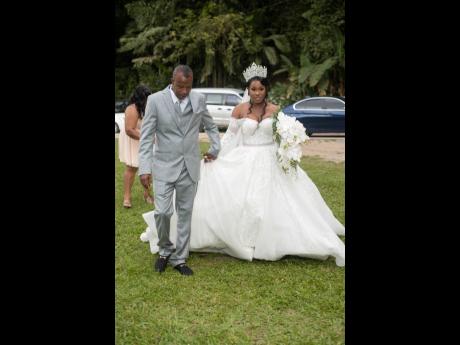 Ksvideographyandphotos
The stunning bride, in royal fashion, is being escorted up the aisle by her father Paul Campbell. 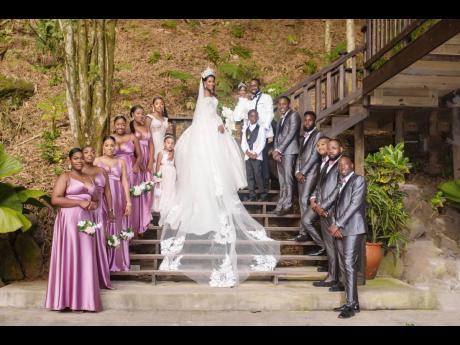 Ksvideographyandphotos
The Whittles were excited to have the nuptial support of their wonderful bridal party decked in elegant lavender, pastel peach and gray. 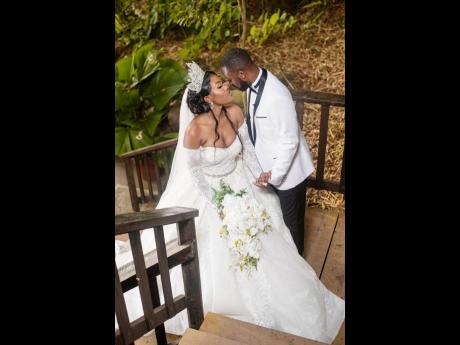 You never know where love might find you: in a vehicle heading home after a long and hard day at work, perhaps? Or maybe making a refreshing discovery in the same neck of the woods. For Ashley Campbell and Lamar Whittle, going from strangers to neighbours seemed like a mere coincidence. But changing in the direction of true love was kismet.

As bizarre as the first encounter was, things got even stranger when the pair decided to take their interactions a step further. Ashley told Island Wedding, “Our first date was an actual disaster as the vehicle had mechanical issues.” But his good company made up for the automotive mishap, and she decided to go on a second date with Lamar.

“I thought she was beautiful and sexy,” Lamar reflected on their introduction. Over time, he found his beloved to be passionate, fierce, progressive and ambitious. “She is also an excellent chef,” he shared, adding that Ashley found the way to his heart from the moment she first cooked for him.

“She motivates me to work harder, so I can be the type of man she deserves. What’s more, we share the same interests; she was very ambitious and focused, so I know we could build a future together,” Lamar revealed.

Being family-oriented was a huge appeal for Ashley. Making smart moves to ensure financial security was the icing on the cake. Noting his brilliant, humorous, loving, progressive and ambitious nature, she was delighted in their similarities and found solace in the difference.

“We were the total opposites in personalities and it worked for us. We are both bankers, both have a love for numbers. But I am loud and outgoing, while he is calm and reserved. He has supported me through my schooling, completing my masters, and he even motivated me to try for a new position at work,” she said, recounting that she knew he was the one when he showed her his caring and nurturing side when she needed him the most: the first time she fell ill.

Five years into the relationship and amid Ashley’s pregnancy, Lamar made the honourable move of asking for his soulmate’s hand in marriage. “I popped the question at our baby shower,” he recalled, adding that Ashley’s family and friends assisted in planning the surprise shower, but no one was privy to his matrimonial mission, until the big reveal. He describes the day as an emotional one, while his fiancée found the truly romantic gesture absolutely beautiful.

A fan of being in control, especially when it came to special occasions, an excited Ashley planned her own wedding. There was no one better to bring her nuptials to reality than the dreamer herself. “It was a great journey, and persons are now reaching out to me to plan their weddings,” she said. Who knows? We could be looking at the next A-list wedding planner in the making.

Intent on sourcing an enchanting ball gown to play into her fairy-tale wedding, Ashley sought the expertise of Samantha Grant of LuxBrides JA, who had the most perfect dress ready and waiting.

On April 9, close family and friends were invited to witness Ashley and Lamar tie the knot in regal fashion. The garden wedding at Boone Hall Oasis provided the idyllic backdrop for the exchanging of vows and saying ‘I do’. The handsome groom waited with bated breath for his bride. His favourite wedding moment was turning around and seeing his bridal queen making her royal walk up the aisle; time, as he knew it, stood still for her arrival.

Adorned in a silver zirconia crystal royal crown, Ashley turned heads in a glamorous off-the-shoulder, long-sleeved ivory ball gown, inclusive of spectacular lace and pearl beaded details and a matching four-metre-long long and shiny, luxury lace veil. This stunner didn’t just steal the show, she was the show and the whole production!

The newly-weds shared a blissful and festive first dance to the mix of soft pop with Calum Scott’s You Are The Reason, the old-school dancehall flavour of Red Dragon’s Bun Dem, and new-school vibe of Laa Lee’s Dirt Bounce. “The wedding was magical,” the groom highlighted, with the bride adding, “It was all I dreamed of, and more. My most memorable moment was kissing my husband.”