Connected for a lifetime: The Davises find love via Facebook 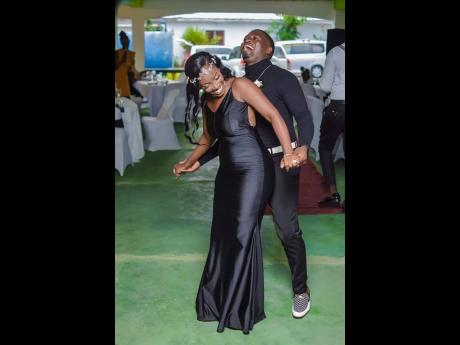 Contributed
They went from meeting by chance on Facebook to their first dance as husband and wife. 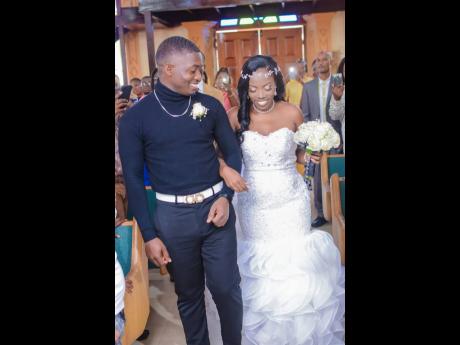 Contributed
The luckiest man alive takes one look at his love and knows he made the best decision when he asked her to be his wife. 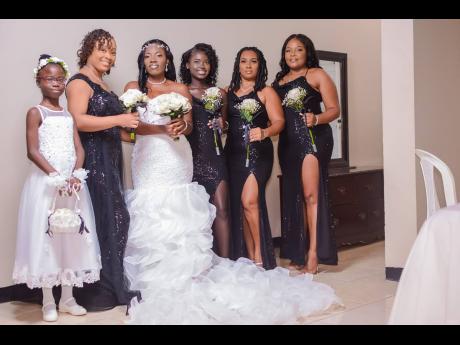 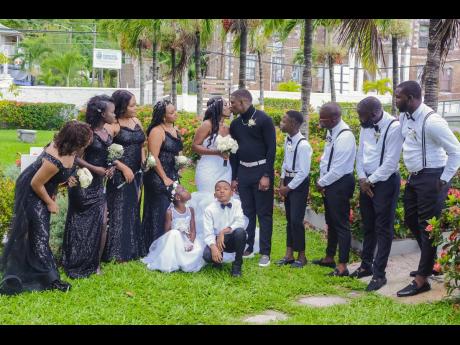 Contributed
Here’s a classic meets chic look at the bridal party who lean in to support the loving couple on their wedding day. 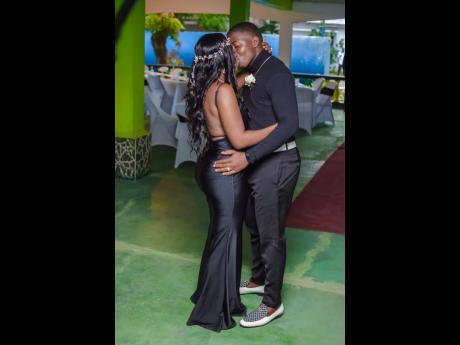 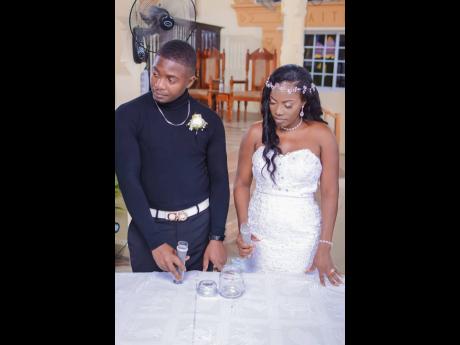 Contributed
The Davises poured their love into each other with a unity sand ceremony. 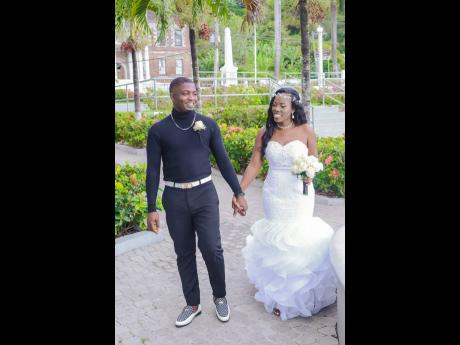 Before the rise of the global pandemic and the plethora of dating sites in existence, singles would make contact with acquaintances, family members, and friends while mingling with potential lovers online. Of all the social streams in the lot, it was the digital invention Facebook by Mark Zuckerberg that made a magical connection for Latoya Morris and Tadrea Davis.

The married couple took a short stroll down memory lane, before their virtual exchange, in the house of the Lord. “I met my husband on Facebook. I saw him at my church before, but we never exchanged any words,” Latoya shared with Island Wedding.

Tadrea, who admitted to recognising her from being in church every Tuesday, said things took a turn for the better when he made a Facebook post and she texted him. He confessed to knowing her, a revelation she seemed surprised to discover, but he had a secret to share: “I actually watched her for two years and never said anything to her. However, I knew she was the one for me.”

On their first date, Latoya acknowledged that nerves got the better of her, and the occasion started on a shy note. She remained transfixed on the man before her and slowly but surely settled into being herself again. “I felt like I had known him for years,” she declared. After one week of communication, Tadrea and Latoya took their interactions to the relationship status.

Amazing, special, beautiful, affectionate, sexy, dependable, and compassionate, Tadrea shared that his beloved motivated him in ways he could not have imagined. She always encourages him to be a dreamer and supports him in his goals. She also covers him with a word of prayer on the phone three times per day: early morning, noon, and night.

“Her prayers and encouragement moulded me into a better person. She exercises a lot of patience and respect. She believed in me when many persons wanted her to turn her back on me. And she showed me what genuine love is,” he said.

Latoya saw the love of her life as ambitious, loving, caring, generous, and determined. She was also moved by his love for God.

“I realised he was the one the first time we actually met in church after we spoke on Facebook. He was waiting for me at the back of the church when it was dismissed. And while I was walking to meet him, I felt like I was wearing a wedding gown. I said to myself, ‘God, why do I feel like this?’ I felt like we were getting married,” she added.

They maintained steady date nights. They enjoyed watching movies, cuddling, going to the beach, and praying together.

Three months into their courtship, Tadrea called for a change in the ‘stat’ to be engaged.

Similar to their initial encounter, the duo sealed the deal via text, only this time, it was Tadrea making the moves: “I texted her and asked her how long after dating she would expect a man to propose to her. She said three months, so I proposed to her.” The unexpected proposal was appreciated by Latoya who could not wait to be his wife.

Husband-to-be did the majority of the wedding planning and was assisted by his best man, Latoya’s maid of honour, his bride-to-be, as well as other family members and friends. It was a huge task, he admitted, noting that at one point, he felt as though he was about to lose it. “But I was persistent. I had to marry the woman of my dreams, so I couldn’t give up.” Determined, up to the morning of his wedding, Tadrea could be found still getting things in order.

Once it was time to pick the dress, Latoya saw one that she could be queening in on her wedding day. But it was too late to order. A few days later, she saw Unions Bridal Boutique with the exact dress. With excitement bursting at the seams, she was yet again met by disappointment due to the size.

“When I got to the store, it couldn’t fit me, unfortunately. I was very sad. However, I was introduced to another dress, one that turned out really well. I had to say yes. I loved it,” she said.

On April 16, Latoya and Tadrea joined hands and hearts in holy matrimony at the Annotto Bay Baptist Church. Before God and among specially invited guests, they declared their undeniable, unbreakable, and unconditional love for each other. Once the pair said I Do, Mr and Mrs Davis kept the festivities in high spirits at the reception held at Farrows Lawn, Port Maria. The newlyweds shared their first dance as husband and wife to CKay’s Love Nwatiti and Kevin Lattimore’s track, For You.

“I felt secure, loved, and appreciated. I felt like I was on top of the world,” she declared. Among the best moments of the amazing wedding was walking towards her husband during the wedding ceremony, “It felt like the first day we met in person. And when he kissed me, it was a kiss of a lifetime.”

Her husband shared the same sentiment of the latter. Expressing that the wedding was all that he had hoped for, seeing his wife walk into the church was the moment he had been waiting for. “My best moment was when my wife reached into the church. After waiting for two hours for her to arrive, I was dying to see her.”