A story of love, loss and women’s health with Dr Andrea Gardner Carey 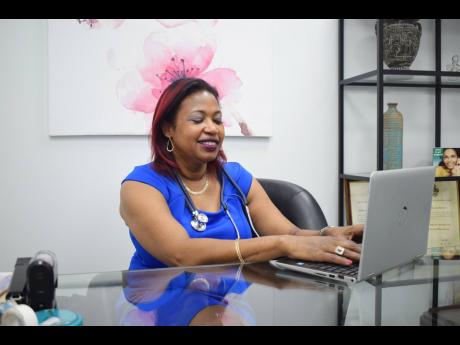 Krysta Anderson
When a patient says something that isn’t adding up, Dr Carey still gives it some credence, “As a doctor, you have to be humble to recognize that the patient may come and know more about something than you and you need to listen and be open-minded. I don’t know everything but I will try to make sure I’ve done everything right for each patient.” If she can’t help, then she will recommend another doctor with good bedside manner. 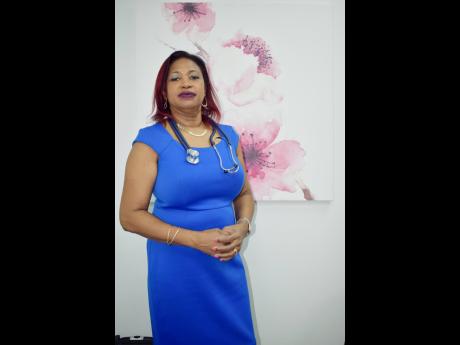 Krysta Anderson
Meet Dr Andrea Gardner Carey, a consultant obstetrician-gynaecologist, with offices at ProSurgiCare Services Limited, in the second floor at Fontana Waterloo at 12 West Kings House Road, as well as at 8-9 Fernleigh Avenue, shop 12, in May Pen, Clarendon. 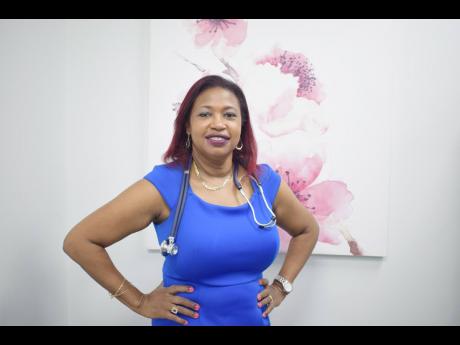 Krysta Anderson
With a warm smile and pleasing disposition, Dr Carey is passionate about helping women through their health challenges. She is proud to be celebrating Women’s Health Week, championing the cause as a ‘frontliner’ for positive change. 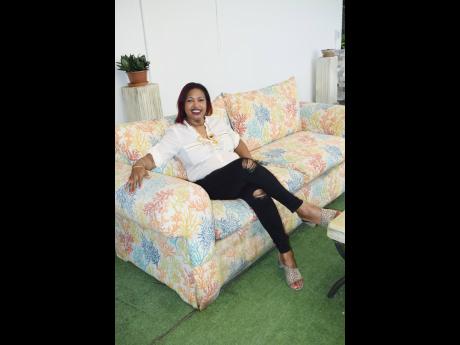 Krysta Anderson
The wife and mother explains that the thing that matters to her the most moreso than being a doctor, is raising happy and healthy children. 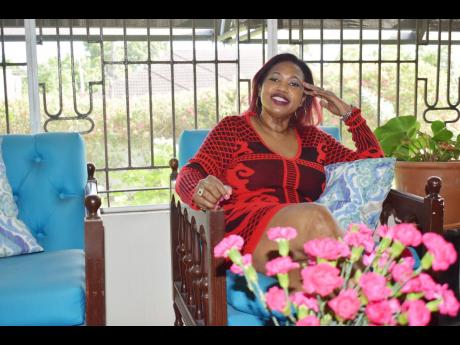 Krysta Anderson
After losing her mother, the doctor took on the responsibility in providing maternal love for three sisters: a role that she holds dearly. Now, as a mother of three, she reflects that if she is one-tenth of the parent her mother was, then she would be grateful. 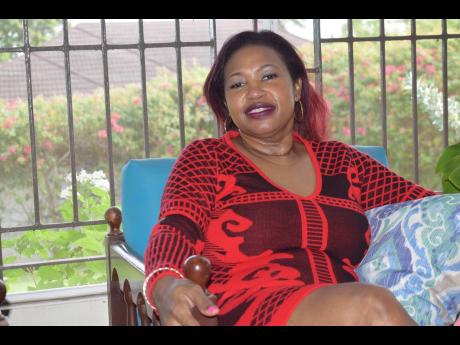 Krysta Anderson
Dr Carey is a firm believer of balancing your life. For women to truly be healthy, she advises that they eat well, exercise, sleep, take a break with friends, engage in an active sex life within your relationship and do regular check ups and screening at the doctor - nothing beats early detection.
1
2
3
4
5
6

Here are pressing issues we don’t discuss enough, miscarriages, pregnancy abnormalities, polycystic ovarian syndrome, irregular periods, postpartum depression, cervical cancer, and many more. As we round out National Women’s Health Week, we weigh in on matters about the well-being of the fairer sex with Dr Andrea Gardner Carey.

To understand this consultant obstetrician-gynaecologist’s purpose, one has to examine the significant role family has played in her life. Her mother, who had her at 19, tried to give her siblings but had difficulty going full term with her other pregnancies. “I remember at least five miscarriages. And, of course, as a child, you don’t understand the distraught nature of what a miscarriage feels like until you’ve been around someone who’s been through one, or have been through it yourself,” Dr Gardner Carey told Living.

People would tell her mother that she was young, healthy, and could try again. But it was more traumatic for her than they knew. “It’s a family member that had been lost. Although that family member didn’t have a face or a name, it’s still a family member. You’re going to be traumatised and oftentimes need counselling for it. That’s something that we don’t talk about as a society,” she added.

When it was discovered that Dr Gardner Carey’s mom had severe kidney disease, the quest for more children intensified, as she was more susceptible to dying young and didn’t want to leave her daughter as an only child. A few more miscarriages later, it was suggested that in vitro fertilisation (IVF) come into play. Fortunate enough to go through with the process, Dr Gardner Carey was blessed with three more sisters: Ashley, and twins Ava and Alane. “There’s a huge gap, an 18-year gap between myself and Ashley. And a 22-year gap between myself and the twins, Ava and Alana,” she added.

Then life threw her the biggest curveball possible. When Ashley was starting her teenage years and the twins had turned nine, her mom had a stroke that proved to be fatal. What she found significant was that the pregnancies sped up the severity of her sickness. This, she says, is something that people don’t understand. If you have a chronic illness, sometimes pregnancies speed up your destruction. It’s 20 years later but the ordeal remains fresh in her mind and conjures up tears at the memory. It was her mother’s passing that made the good doctor rush to try and get pregnant as well.

Happy to get pregnant as soon as she came off contraception, she was in for a painful pregnancy. “I kept praying that the problem would disappear but it didn’t. Eventually, I got my doctor and he said ‘we have to get this (the fetus) out now, like tomorrow’. I had exams that day since I was in my final year of med school and he’s like ‘No, you’re going to have to get excused or do it at another date, we have to get this out now,’.” After the procedure, the pregnancy abnormality left bits of placenta behind that continued to grow. So, chemically, Dr Gardner Carey was still pregnant with no baby in her womb. She had to undergo chemotherapy for six months, missing her final-year exams.

With all the struggles, she knew in her heart that she wanted to be an ob/gyn. Based on her mother’s illness and her own experiences, women’s health was the ideal fit. “When I rotated to obstetrics, I was like, ‘This is really where I want to be’. I liked the hours and I liked the fact that I was dealing with women. As women, we’re special because we are not just men with female parts. Our brains are different, our lives are different, and so I realised that, beyond just the medicine, I have to be here for emotional support,” she said.

But it wasn’t easy encouraging and congratulating other women when she was unable to get pregnant again. “I work with pregnant women at this point and, every time somebody gives me good news, ‘Oh Andrea, we’re pregnant!’, I’m happy for them but then I go home and bawl my eyes out,” she confessed.

She became pregnant with baby number two and was so nervous that she took time off during her internship just to see it through safely. Miraculously, the doctor assumed her new role as Mommy. “There’s a curse and a blessing for doctors and nurses that we always get the ‘weird and wonderful’, and so I guess that’s what happened there. I now have three children, ages 17, 15, and 11, and the pregnancy abnormality never re-occurred. They were all healthy but, with the passing of my mom, I now was responsible for my sisters in a way. I’m proud of them because they did well and they didn’t make too many wrong turns. I just wish Mommy was here to see them grow up. She would have loved that. If I’m one-tenth of the mother she was then, I’ll be grateful,” Dr Gardner Carey said reflecting.

According to the doctor, about seven out of 10 women have recurrent miscarriages, a diagnosis where three or more take place. The moment, however, two occur, Dr Gardner Carey begins her investigation because she doesn’t want there to be a third. “I remember, years ago when I was in university training, I met a lady who had six miscarriages. Once we did the right test for her, we found out why and then she had baby number seven, she had a baby with number eight and decided to stop. Once we sorted out what her problem was, two babies. So she probably didn’t have to go through all of those before. I and many of my colleagues are trying to stop that process because there are things like your health to consider but there are probably things in your blood that can contribute to miscarriage, and we have to be on top of it,” she explained.

Here are some of the areas she revealed that will optimise women’s health: eating well, exercising, getting enough rest (finding a sleep number and cycle that works for you), going out with your girlfriends for a night on the town and having a good sex life. “We all love junk food because it tastes so good. And we’re programmed as women to love salt, to love fat and carbs. We love those things, myself included. But guess what? Tey plump us up, and a lot of us, one-third of Jamaican women have polycystic ovarian syndrome. When you put on weight, the period is going to go crazy. So the things that Mommy and Daddy told us from a long time about eating healthy, and getting enough sleep are very important,” she declared. Sleep helps to restore, and recover the brain and presents exhaustion or fatigue. Exercise reduces stress and releases endorphins - it also increases flexibility, which the doctor says is great for the bedroom. Laughter, she says, is the perfect medicine for the pressures of life, and it’s important to form bonds with others like ourselves who have the same genetic make-up.

“We women skimp on ourselves because we’re busy helping everybody else. So, going out doesn’t mean with your boyfriend on a date night, but with your girlfriends: getting some good girl jokes or going to a movie and then going for drinks after, giving and laughing at some good jokes, and just sharing. Men are different; their brains work differently and you’ll behave differently. When you’re with your girls, you’re amongst people who are like you, who think the same as you,” she revealed. If you’re in a relationship, having sexual intercourse relieves stress and reminds you that you’re sexy. “Sex is not for children-making, that’s a small portion. It is for us to enjoy being with our partner and stress-relief, and to feel good.”

And, last but most certainly not least, see the doctor regularly and do the necessary check-ups and annual screening. Dr Gardner Carey lamented over the fact that so many women could have received more assistance and more options would have been available to them, had they visited the doctor sooner. “I would like women to focus more on themselves. It’s not being selfish; you’re safeguarding the family and yourself because, even if you don’t have children, you’re still taking care of people, and those people depend on you. There are so many jobs that mothers do that we take for granted and even if you’re not a biological mother. We mother so many people that, when the mother drops out, it is chaos. It takes years to recover from that chaos. We have to take care of ourselves and that’s mind-body-spirit. I love what I do and I’m honoured and privileged to do it every day. I will give you my 100 per cent once you’re there, and I’ll go beyond sometimes because it’s that important to me.”