A bright and colourful life for Richard ‘Von’ White 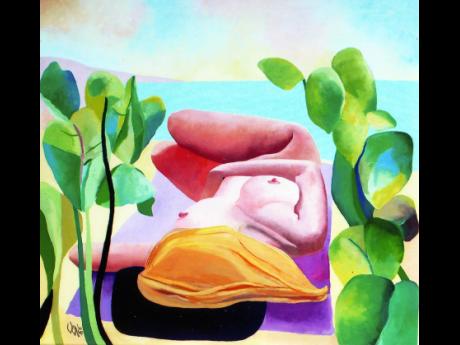 Contributed
‘Eve of Glasgow’ is one of many pieces in which the female form is embedded by expressionist artist Richard ‘Von’ White. 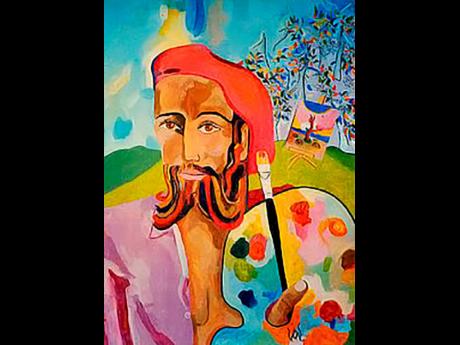 “I think I am the most original expressionist in Jamaica. Nobody else works like me,” artist Richard ‘Von’ White of Oracabessa, St Mary, told The Gleaner with a little grin. And, indeed, his pieces are not very similar to what is typically sighted in the Jamaican art landscape.

Expressionism is not just creating a look-alike version of the subject/object, an impression, but it is expressing your feeling and emotions about it. Thus, it becomes contorted, and abstract. It is not mirroring the image (impressionism) but is evolving it.

White regards himself as a “contemporary modern abstract artist, a tropical modernist” who does not do topical, conventional paintings like those from the Renaissance, including the impressions of Claude Monet and those from the post-impressionists, such as Paul Gauguin, Vincent Van Gogh, and Paul Cezanne. He does “tropical modern art in beautiful abstract settings and colours”, he said.

He was born in a St Andrew hospital during Hurricane Charlie in 1951 and was brought back in the pouring rain to Oracabessa, where he grew up. After high school at DeCarteret College College in Manchester, his mother wanted him to pursue a more “substantial” and “lucrative” career, such as banana farming, but art was what he wanted to do.

So, off he went to Philadelphia School of Art, where he spent 10 days, before returning to Jamaica. He attended the then Jamaica School of Art for one year. After that, he enrolled in London’s Hammersmith College of Art for his foundation courses to qualify for the Goldsmiths College University of London, from which he obtained a first-class bachelor of arts degree in fine arts.

He has now been expressing himself through his art for many decades, having his first major exhibition with A. D. Scott at The Olympia Gallery in St Andrew, after returning from art school in 1977. His pieces are “intense”, brightly coloured, and not necessarily of the same colours that you would find in the natural and man-made world. They seem to glow, thus the term ‘tropical light’, which he used to describe their effect.

“Fine art should not be depressing, it should awaken your senses, and make you feel happy. It should always be a pleasure to look at,” he shared.

Thus, his settings are invariably tropical, radiating ‘tropical light’, which is created from acrylic paint morphing into pastel, almost neon. This burst of colours is also bordering on the psychedelic, with the objects, colours, and the settings sometimes morphing and blending into one another. He said his art is an “artistic abstract take on life, happiness, the female form, and tropical paradise”.

The female form is a recurring motif in his pieces. There is even an entire series about it, called ‘Modern Art Nudes’, and is subliminally expressed in the ‘Modern Art Cars’, ‘Modern Musical Instruments’, ‘Modern Art Places and Dwelling’ and other series. “The female form always has been a major source of pictorial language for me. The mainstream work is composed of exotic tropical plant life and the female form incorporated, “White explained, “I play with shapes from both within woman and nature until I find a satisfying organic logic.”

In addition to the aforementioned series, there are also the ‘Modern Art People and Places”, ‘Extra-terrestrial Canyons’, ‘Modern Art Space and Time’, ‘Modern Art Island Flora’ series. He is inspired by artists such as Georgia O’Keeffe, Paul Gauguin, Richard Lindner, Pablo Picasso, and pop artist Tom Wesselmann and R. B. Kitaj. There is also much inspiration from the classic rock and roll music of the 1960s, his teenage and young adult years, and the psychedelic era of social, musical, and artistic changes.

“It is mixed with the vibe of the rock and roll icons, and groovy cats from the ‘60s,” he revealed, as demonstrated by the ‘Modern Musical instruments’ series, and the ‘Extra-terrestrial Canyon’ series, which, he said, is “musically inspired expressionist rock and roll US canyons”. He listens to rock and roll, jazz and blues mainly while creating all his pieces.

“Music is very much a part of my creative process, and I listen to a lot of music, especially while painting. I think my paintings definitely have a musical connection within the five senses. What I am seeing and painting is what I am hearing and relating to at the same time,” he said.

“Yeah, we’re kinda, mix man, for centuries. I am Jamaican, out of many, one groovy people--so, I said, I am a born artist with all the colours seen through the spectrum in my DNA. Kinda mystical, maybe that’s the secret to my palette. So, I said, hey man, you don’t want to be a monochromatic philistine now, do you?”