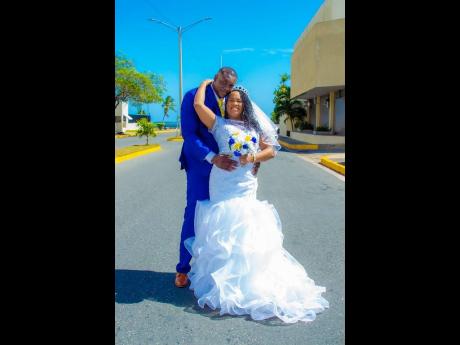 Contributed
It was faith that made this union possible, but love made it all worth it. 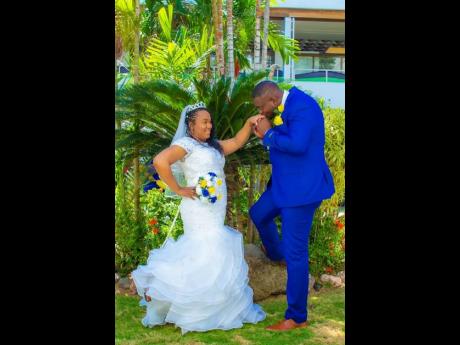 Contributed
This divine duo painted a beautiful canvas of endless love in the colour of ‘Whyte’. 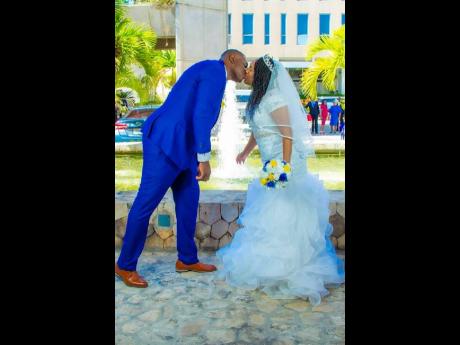 Contributed
This kiss that seals two souls for a lifetime. 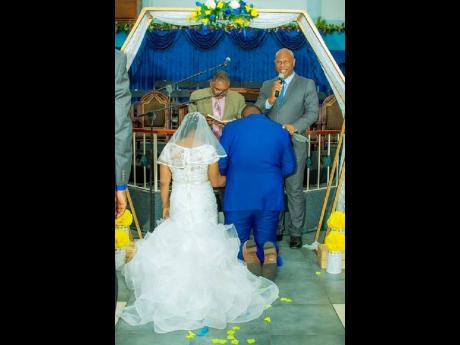 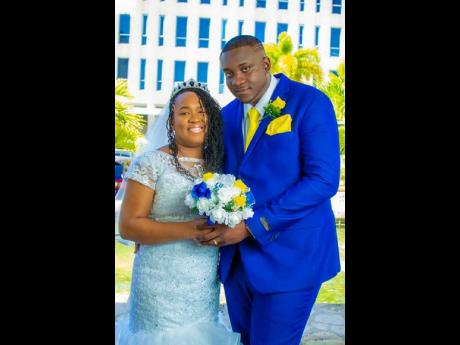 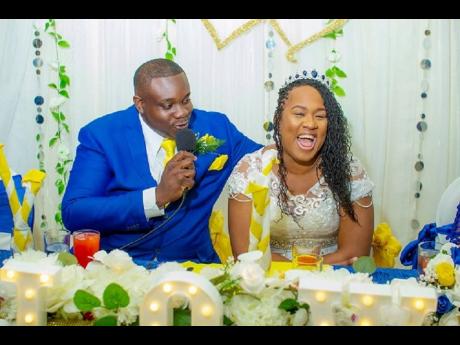 Contributed
The groom’s reply was one of the bride’s favourite moments on their wedding day. 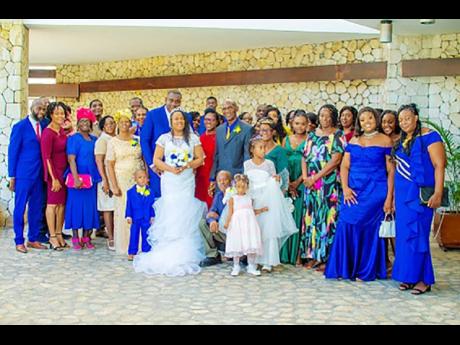 Contributed
The Whytes expressed sincere gratitude to their specially invited guests for sharing in the joy of their wedding day. 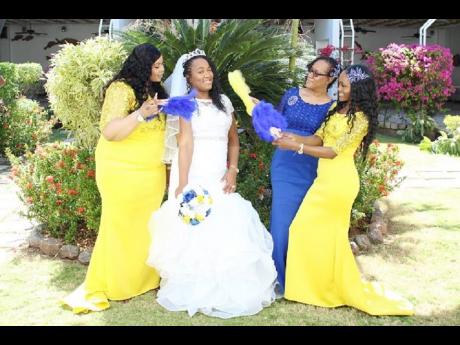 Contributed
Happy and supportive bridesmaids make for an even happier bride. 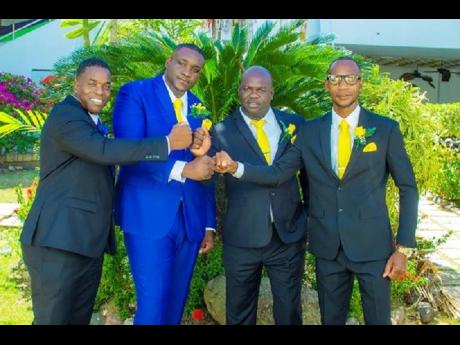 Contributed
The groomsmen were excited to share in the groom’s momentous day. 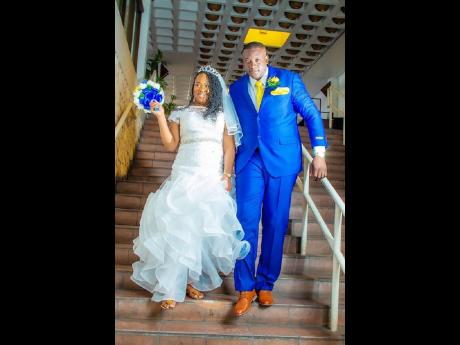 “After years of disappointments, I was right where I wanted to be and who I was meant to be with,” a content Jody-Ann Mitchell reflected as she reminisced on saying 'Ido' to the love of her life, Oshah Whyte. The two might have met under business circumstances in church, but it turned out that they had been the partner each was praying for. Let's see how this divine duo painted a beautiful canvas of endless love in shades of 'Whyte'.

“We met at my church, as I wanted him to be a guest speaker as a police officer at one of my youth services. He drove two hours that night, too, and from his parish, to do that assignment,” Jody-Ann told Island Wedding. Oshah's height stood out to her in an instant, his most talked-about feature, but she also found him to be friendly as well. He shared a similar amicable sentiment, highlighting that he thought that Jody-Ann was very calm, humble, and a nice person overall. “She was also big on organising things,” he added.

So how did Jody-Ann embark on the journey of walking the 'Whyte' line? According to the couple, it was an exchange via WhatsApp that changed the nature of their relationship. On Saturday, May 4, 2019, Jody-Ann posted a WhatsApp status, to which Oshah responded with a comment. From there, the pair engaged in a scintillating conversation over the phone. He noticed that sparks flew between them, and he was not alone in that discovery. “I will never forget that day. I literally felt a change in the atmosphere of the room that day, like God was saying, this was a move I should definitely take,” she shared.

Oshah remains fascinated and amazed by his beloved's caring, loving, loyal and royal nature. As a lover of God, she is devoted to any action that can make the Church a better place; and she is a praying woman who believes in seeking directions from God.

“Jody has helped me to remain focused in heading towards my goals and is always looking for anything that can be a business investment. She's the conflict resolution officer in the relationship. She believes in settling issues as quickly as possible; this helps us to grow stronger together,” he revealed.

This loveable, level-headed, wise, knowledgeable, attention-giving and humourous man of God not only talked the talk, but walked the walk for Jody-Ann, “Oshah believes in growth, productivity, and not sitting on your talent. Hence, he always said to me, 'Jody, you have a degree in business and the potential to do so much more,' and out of this came my small business, TJM Enterprise. He and I also created a brand together, J.O.W. We have J.O.W Farming, and it is our dream to see our brand J.O.W grow bigger in the future. I also love that despite everything that he went through in life, he never lost hope and faith in God.”

After seeing how committed and open she was within a few months; taking advice from one of my best friends, who told him, 'don't let Jody-Ann slip away'; and, of course, through prayer, Oshah knew God had sent his lifelong partner. Both parties are family-oriented, so parental acceptance was important. She knew he was the one when he received the blessings of their relationship from both his parents as well as hers. Almost three years of courtship later, the couple went the biblical route of engagement, again seeking further approval for marriage from their parents and doing the proposal at church.

“My pastor really did a great job in the announcement. It was streamed live, and it was watched by so many on social media. I loved it! It was so overwhelming how the congregation cheered. I really felt special, blessed, and loved by my church family, and by Oshah for taking this bold step with me. One visitor actually came up to me on the day and said, 'I don't know you, but just to see how the church was cheering you on, I'm so happy for you,” the fiancée gushed.

The bride-to-be went into full wedding planning mode, organising every little detail with the support of her loved ones. When the time came around to select the ideal dress, she said yes to her dream design of a ruffled-bottom gown from Unions Bridal Boutique.

On April 16, Jody-Ann and Oshah unlocked a whole new chapter of love, joining in holy matrimony at Bethel United Church of Jesus Christ (Apostolic). Once they said 'Ido', the Whytes went on to have a festive reception filled with happiness and love. The newly-weds ditched the traditional first dance and, instead, opted for dancing into their reception to I Gotta Feeling By Black Eyed Peas. “I am usually a reserved person, so Oshah was definitely drawing me out on the dance floor for that one. It was fun. Those who knew me said, 'Jody broke out',” Mrs Whyte said, with a laugh.

Her favourite moment was her husband's delivery of the groom's reply. Noting that this was his forte, the bride got emotional at the end when he played the song All My Life by K-Ci & JoJo and dedicated it to her, “Suddenly, at that very moment, nothing else really mattered. One guest later told me that at that moment as Oshah held me in his arms, with tears in my eyes, that sealed the deal for her that he was an amazing guy. As I always say, nothing truly happens before [it's] time.”

The day, according to the groom, was spent with family, friends, and well-wishers, which made it a memorable one he would not exchange for anything. “My best moment was after taking her veil off, I had to say, wow! Seeing her for the first time as my wife, I felt like a man and that my life had begun,” Mr Whyte highlighted.