A dad of six, local farmer Garfield Swaby is a father figure for his community 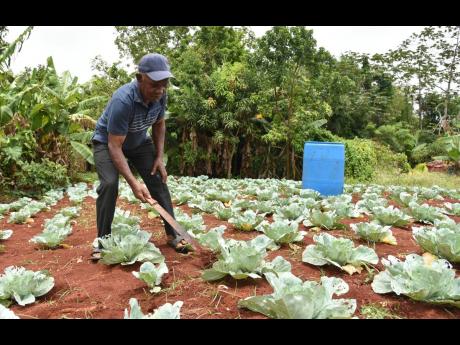 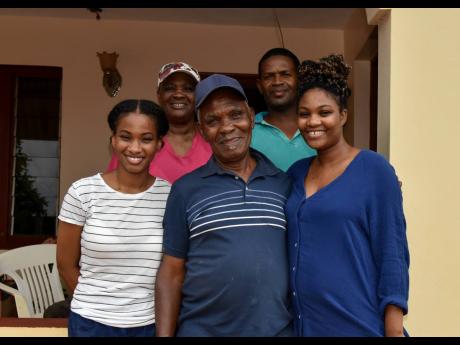 Kenyon Hemans
Garfield Swaby (centre) and his family. From left (back row): wife Hermina; family friend, Clive Thomas and (front row) granddaughters Keshia and Shanniel. Swaby spoke about what it takes to be a good father and some of the hardships he faced to accomplish his dreams and take care of his children. 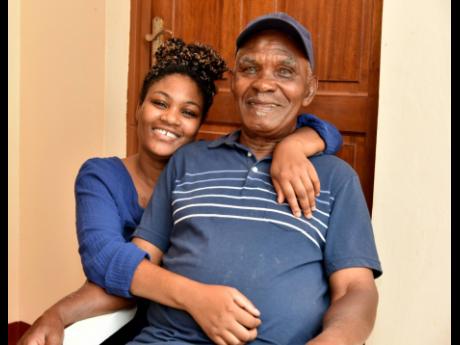 Kenyon Hemans
Swaby shares a moment with his granddaughter, Shanneil.
1
2
3

The quest to find a father who not only dedicated time and effort to raise his children, but played a paternal role in his community led us to Berlin in St Elizabeth. There, we were greeted by a pleasant local farmer who goes by the name Garfield Swaby.

Those who know Swaby would describe him as friendly, kind to people, hardworking and loving by nature. “No matter how low it gets, I try my best to make it work,” he told Sunday Lifestyle.

Swaby, who is looking towards celebrating his 75th birthday, is a proud father of six. From humble beginnings, he recalled spending days in the parish on the farm with his grandfather, growing garden provisions like tomatoes and carrots and rearing livestock. It was there that he developed a passion for working the land and harvesting the fruits of his labour.

Noting that he always wanted to go places, when he was older and deemed himself a man, he moved to Mandeville. Swaby said he found a job there in the 1970s. “I found a partner and I was able to get married after one year,” he added.

He, his wife and his two children soon moved to Kingston, where he continued to build a life for his family. He worked in the city for seven years and had four more children. However, the surge of crime and violence in the 1980s proved to be chaotic and problematic for a man who appreciates a calmer and quieter environment. So he uprooted the family and made the move back home to his grandparents – arguably the best decision he ever made.

Upon his return, life dealt the most difficult hand when he was put out of his family’s house. Faced with displacement and a family depending on him, the resourceful farmer used the leftover boards from the renovations of his previous home to set up a two-bedroom structure. The temporary home was always filled with love, and block by block, they were able to construct a secure new home.

Raising five boys and a girl was not easy, especially when trying to make ends meet. But he did not shy away from his responsibilities. If anything, it became the driving force behind his success. His daily routine included being on the farm at 5 a.m. and, most times, returning at dusk. To date, his favourite memory is having his children on the farm with him before school and attending church as a family. “They were good children, and I am grateful. They understood hard work, and they were happy to be on the farm and help. Even my daughter was right there with the boys. I’m glad that they are grown and doing the right things.” he shared.

Swaby didn’t have a relationship with his own father, so it was important for him to be there for his children. Admitting that he reconnected with him in Mandeville while in his early 20s, the journey of father and son had already passed, and the most Swaby could offer to his father was a friendship. He was in no way resentful, that is not a part of his modus operandi, but he did state that he never wanted that for his own children. So he did whatever he could to survive, thrive and do right by his family.

His youngest child is now in his 40s, and Swaby’s status has now been elevated to grandfather – a prominent role which he finds just as exciting. “I love my grandchildren. They bring so much joy to my life. And it’s good when you can have a positive impact on the future generation.”

His granddaughter Shanniel had nothing but good things to say about him. “I love that he is always there; he is always present. He is a father figure for me, the other grandchildren, the community and the church. He is a people person, and everybody loves him,” she said, adding that he always encourages her to be a better person, to continue school and achieve something good out of life. Whenever she visits, she looks forward to the talks, the laughter and doing everything together. “He’s the best person ever. You can ask anybody,” she added.

His other granddaughter Keshia shared that he contributed a lot to her childhood, introducing her to certain traditional foods like toto, “He is very hardworking, and I love that about him.”

Swaby is not just a gem in his family but in his community, extending his paternal wisdom to residents of Berlin. “I try my utmost best to be a counsellor to those living in Berlin. If they want to come to me for advice, I will be there for them and help them. You have people who are being resented by their own parents, and they would come to me for advice about how they ought to go about certain things,” he said.

These days, his loved ones are urging him to take a step back from the farming and slow down the pace, which he is taking under advisement since they are taking care of him financially. His journey from nothing to having everything he could dream of while helping others achieve their best is truly inspiring.