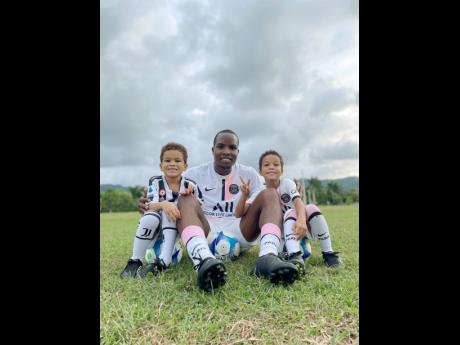 Contributed
Errol Stevens is sandwiched by his footballer sons, Ronaldo (left) and Lionel. 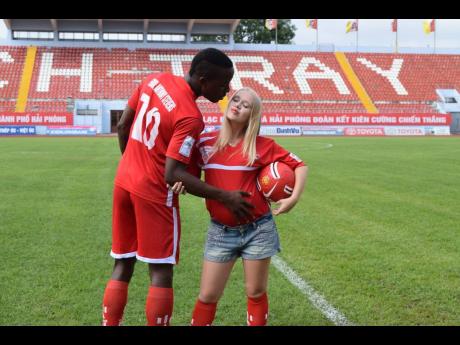 Contributed
Life for Stevens changed for the better when the professional footballer discovered that he was going to be a father. Here, he shared a loving baby bump moment with his wife, Ekaterina Nikiforova, who was pregnant with Lionel. 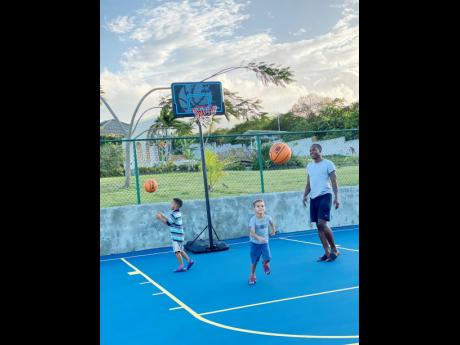 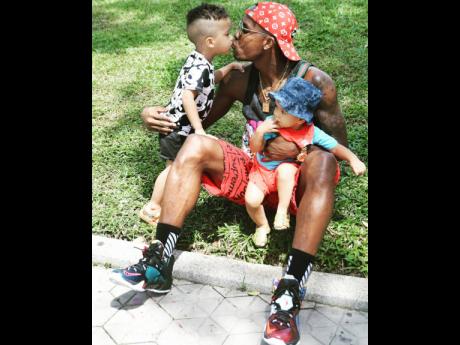 Contributed
Stevens shares a moment with his older son, Lionel, while holding his younger son, Ronaldo. ‘My parenting style isn’t what we would call Jamaican. I don’t believe there is a perfect parent. I just let love and respect guide my path. I don’t want them to be afraid of me. I encourage my children to love and respect me, while I love and respect them,’ he said. 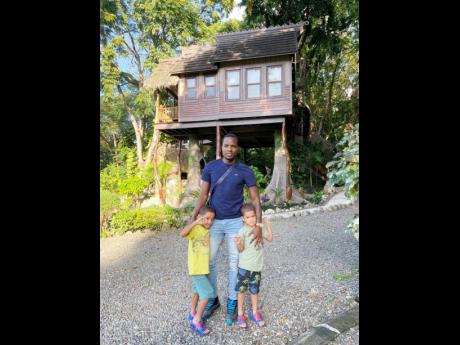 Contributed
The entrepreneur hopes to leave a legacy behind for his sons.
1
2
3
4
5

Life before being a dad for Errol Stevens was all about being a professional footballer, furthering his career and building his life with his wife, Ekaterina Nikiforova. But everything changed when he became a father. Stevens gave up the sport and moved from their residence in Asia to Jamaica, where he is now raising his family.

“I’ve always wanted to become a boy dad,” he told The Sunday Gleaner. He named his sons Lionel and Ronaldo after legendary football players Lionel Messi and Christiano Ronaldo.

Stevens, who played for Harbour View and Arnett Gardens locally, went on internationally to play for Saraburi United Football Club in Thailand, as well as Hai Phong Football Club and Dont A Thanh Hoa Football Club, both in Vietnam.

The former football player’s parents separated when he was six. From then onwards, he lived with his mother. It was being raised by his mom that made him realise why boys need their fathers at home. “Financially, I had a great father, but physically, I didn’t have him. It’s not only financial support. It’s also about providing mental support.” He confessed that he had to mature quickly, noting from observation that while his friends had a father figure to run to, he only had himself.

“I didn’t want that for my boys. Good or bad, I like being the one they come to, whether it’s about homework or anything else life will throw at them,” he said, adding, “I’m getting back the childhood I never had by being there for my boys,” he said.

While he now enjoys being an entrepreneur and having his family in Jamaica, that wasn’t always the plan. He and his wife were living in Asia for five years. His wife gave birth to their first son, Lionel, in Vietnam, where they didn’t speak the language or have any family members around to help. He was away travelling and playing games in other cities two to three weeks at a time and felt terrible about leaving the mother of his child to hold down the fort in his absence.

Life, however, took a turn with a lawsuit with his football club. He couldn’t stay in Vietnam, and returning to his wife’s home country, Russia, wasn’t an option due to the racism experienced there. So he returned to the land of his birth, highlighting that the decision had been nothing short of a blessing. They went on to have their second son, Ronaldo, and described preparation for his entry into the world as a much smoother transition. They were older, wiser, and considered themselves professionals at parenting, bringing a world of experience from baby number one to baby number two.

When asked what fun activities they do together as father and sons, Stevens shared that they love playing football. He had even took steps to start a football academy with his sons, which has now grown to include other children.

“I consider myself to be a dad to all the children. I train, and I try to use football to teach them about life. That’s how I learned about life myself. I’m teaching them how to lose without giving up and look at losing as a lesson and to not be afraid of making mistakes, to learn and come back stronger. Teamwork and how to get along with their peers, social skills and building a high self-esteem are all a part of football and football was my happy space growing up. When I got a chance, I would train or play all my problems away, and I see that with all the children that I train. Whenever they get onto the field, it’s all smiles and happiness just to see their friends and interact,” he declared.

At home, he says he is able to see his boys’ personalities shine. Lionel, who is six, is more on the reserved side, but he speaks Russian, English, and patois. On the other hand, four-year-old Ronaldo is the vibes of the house who makes it his duty to make everyone laugh with his jokes.

The husband, owner of two Airbnbs, author of two books – To Hell and Back and Life with the Stevens: Finding Financial Independence – and a YouTuber says that being a father is his hardest but most fulfilling role yet: “It’s important for me to be the father I never had. I still have those traumas of not having a father around, but I’m healing through my boys, and I already see the benefits in every hug they give me and how easily it is for them to say, ‘I love you, daddy’ for no reason at all. I told my wife the other day that my boys had told me enough ‘I love you’ more than my parents have told me and more than I’ve been confident enough to tell them, and that’s only because of the relationship I’ve built.”

He hopes to leave a legacy behind for his children and will continue to make the necessary sacrifices for his family, “I’ve always wanted to drive a Benz or a BMW, but on both occasions when I could have bought either, I choose to buy properties to pass on to my children.”