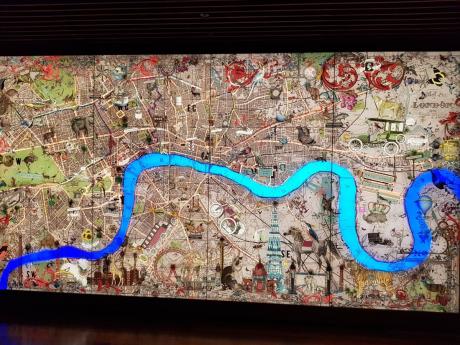 Contributed
Map of London in the Hu Tong reception area. 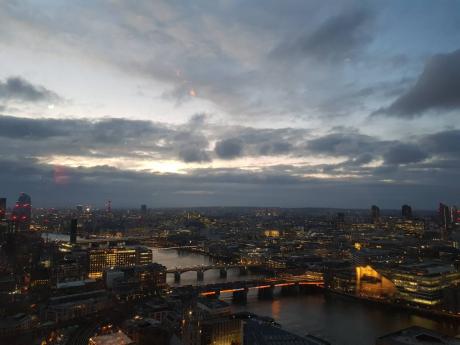 Contributed
View from the Hu Tong Restaurant at dusk. 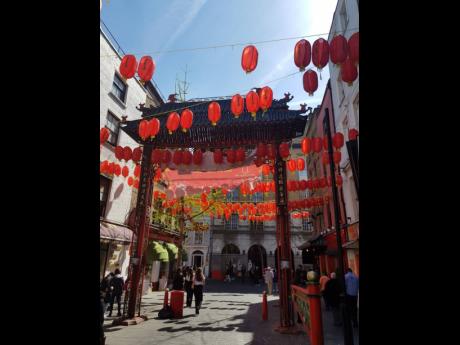 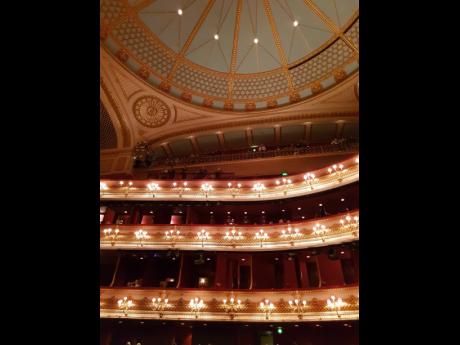 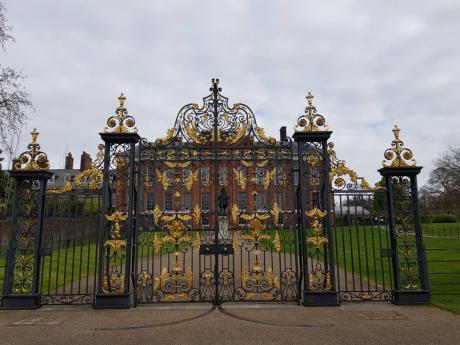 After over two years I returned to London. How very cosmopolitan the city remains, one can gain an education in world affairs just by driving around in Uber cars. The second week of my trip I had 11 Uber drivers of completely different nationalities from the first week, including from Sri Lanka, Ethiopia, Pakistan, Jamaica, Bangladesh, Afghanistan, South India, Kosovo, Nepal, Somalia, and Ghana. The only British driver of the 20 drivers in all was in a black cab which we took after leaving the opera at Covent Garden.

What an opera it was! No one in the Covent Garden reception area could pronounce Hrachuhi Bassenz, La Traviata’s leading soprano’s name, nor could any of the members of the audience in the foyer afterward, but she was splendid.

When I was a teenager in New York, I heard Leontyne Price at the Metropolitan Opera house. She was the superb first African American soprano to receive international acclaim in the 1960s when she sang Giuseppe Verdi’s Aida. Decades later I had the privilege of hearing Aida performed in the Roman amphitheatre in Verona, Italy. I’ve even been to Glyndebourne, in the East Sussex countryside in the summer which the English so love, but never have I been so entranced by an operatic performance like La Traviata.

In English La Traviata is translated as The Fallen Woman, also by Verdi, it deals with a man falling in love with a woman with a past, a courtesan to be polite, and his father who wishes to save the young man and the family’s reputation by appealing directly to the fallen woman. What was sensational in this performance was that not only did the soprano have an excellent voice, but she could act. To be honest, the discreet translations into English from Italian which appeared unobtrusively far above the stage also helped us to follow the narrative. She got a standing ovation for numerous curtain calls. I highly recommend this opera or anything in which Hrachuhi Bassenz performs. If you ever figure out how to pronounce this Armenian singer’s name, please let me know.

Considering that the Duke and Duchess of Cambridge, who had been inhabiting Kensington Palace, visited Jamaica not long ago, my niece and I decided to visit the royal home. Normally one sees the rooms of Queen Victoria as a child, the King’s State Apartments, and the Queen’s State Apartments, but I was keen to see the photographic exhibition, ‘Life Through A Royal Lens’, of photographs from the 1800s to the present. Built as a royal home for William III and Mary II at the end of the 17th century, the latest addition has been the Sunken Garden, featuring the statue of Diana, Princess of Wales, unveiled in July 2021. While the visit is definitely of interest to anyone who enjoys history, the photographic exhibition was a let-down as most of the photos were famous ones already seen, though the most important to me was a candid shot of Queen Elizabeth II sitting, smiling lovingly at Prince Philip who is laughing, taken on the 20th November 2017 to commemorate their 70th wedding anniversary. Considered too personal for wide public release, this was the first time the photograph was on display. I did find it fascinating that Queen Alexandra was an avid photographer and many in the royal family kept photo albums, some were on display with their historic content.

Buckingham Palace is normally only open for the summer when the Queen is away at Balmoral Palace in Scotland, but since she has permanently moved, in celebration of the Platinum Jubilee, short tours of Buckingham Palace, lasting one hour, were offered. Having previously taken the complete tour from stables to Queen’s Gallery plus the State Rooms with their magnificent paintings, I can only tell you that one feels as if walking through history.

The art of Kew Gardens

Next to Kew Gardens, which I’d visited decades ago, instead of wandering through the tropical hot house, my niece and I ventured onto the trolley which wended us around the property, with commentary pointing out the Great Pagoda which I’d missed the first time. While the hot house is a must, I still found the most fascinating place to be the Marianne North Gallery in which frame to frame, waist-high to ceiling, her paintings of exotic plants and flowers are displayed, each numbered so that you can look down by your waist and see the name of the plant and from where it came. She travelled the world for 13 years and though an amateur, North was a gifted artist whose idea was to exhibit the paintings in the gardens where her passion began. In 1879, she offered to build a gallery if Kew director Joseph Hooker would agree to display her life’s work. The gallery was completed in 1882 and remains absolutely fascinating, including works of Jamaican plants. I should have bought the package of postcards with her paintings! Darn.

For some family fun, we headed to the Hu Tong Restaurant on the 33rd floor of The Shard. With dishes from northern China, based on a popular restaurant in Hong Kong, the cuisine is always fabulous, but even more exciting are the views. Even if you only visit the bar below, the views make an evening special. Plus, the wait staff are super nice. This is another level above the other high-altitude restaurant I wrote about before. If you can’t get to London, Hu Tong now has a branch in Brickell, Miami, without the fabulous views. Less prestigious, but in great demand is The Golden Dragon in China Town which is always packed, and does not take reservations, but the food is great and China Town is worth a visit.