Veronica and Bridgette say ‘yes’ to forever in Valley of Dreams 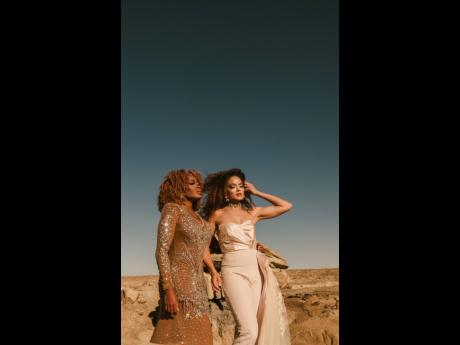 Contributed
Veronica (left) and wife, Bridgette, are looking forward to spending the rest of their lives together. 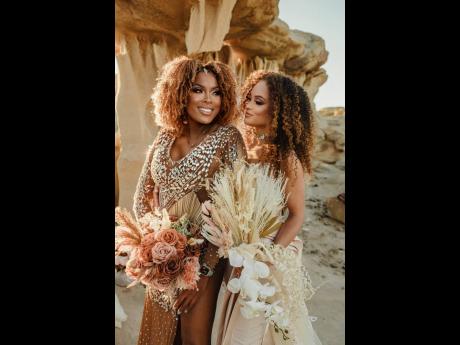 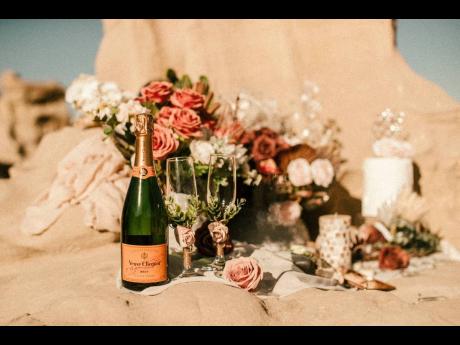 Contributed
With much to celebrate, the beautifully staged champagne flute and champagne are the perfect setup. 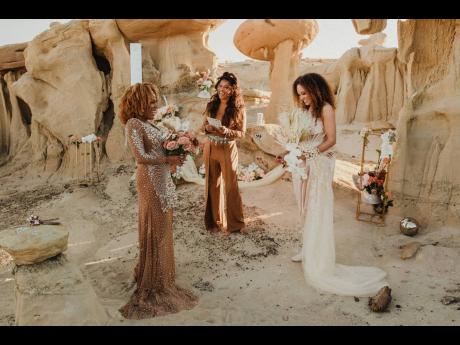 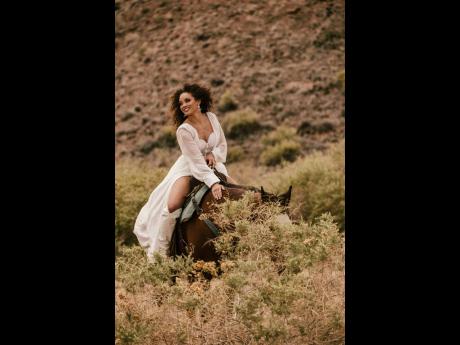 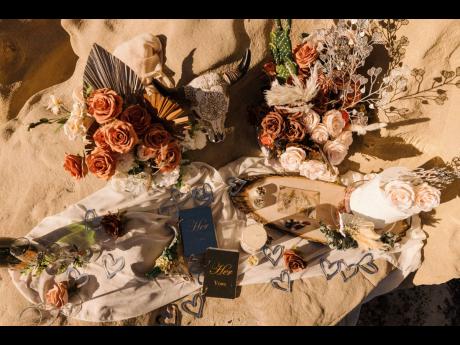 Contributed
Veronica ‘Wildchild’ Paige’s creative juices flowed easily, evident in the transformation of the desert where she and her wife, Bridgette Young, chose to exchange their vows. 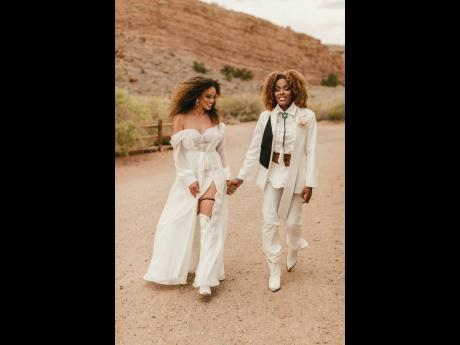 Contributed
Veronica (right) took the reigns for the couple’s stable looks, with Bridgette donning a dress designed by Veronica, and Veronica wearing a suit by MariaQueenMaria. 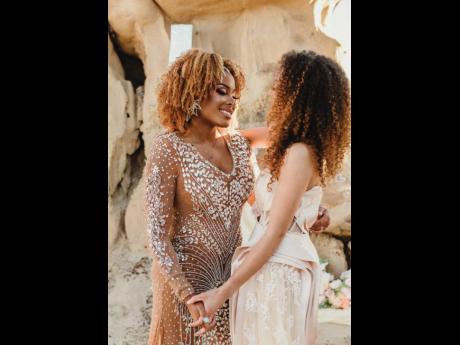 Contributed
Veronica and Bridgette Young stare lovingly at each other. 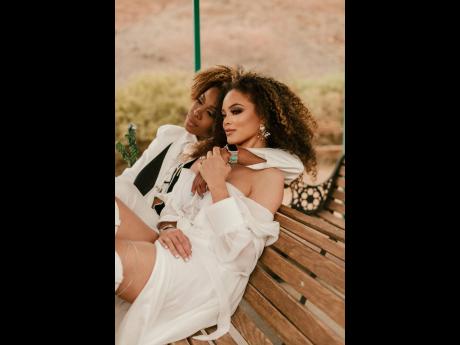 Contributed
The Youngs look forward to spending the rest of their lives together. 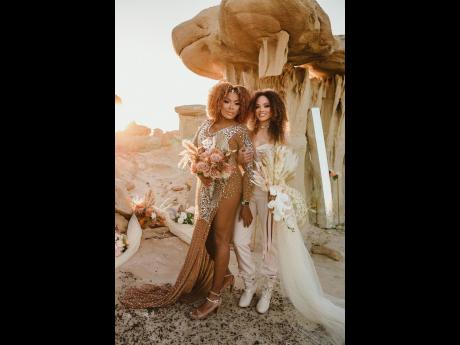 Contributed
Jamaica-born Bridgette Young and her American wife Veronica Paige at their wedding in the Ah-Shi-Sle-Pah Wilderness, New Mexico, in the Navajo land.
1
2
3
4
5
6
7
8
9
10

Bridgette, a Jamaican chef by profession who now works in logistics at Flexport, and Veronica, an American whose creative juices are imprinted on her Wildchild Society business, eloped at Ah-Shi-Sle-Pah Wilderness in the Valley of Dreams, New Mexico, last month, fortifying their love in an intimate wedding ceremony officiated by Veronica’s sister, Alyson McRipley.

Their witnesses, the giant mushrooms, an alien throne, tribal blankets, a bull skull replica, metallic pedestals, metallic vow books, metallic hearts, champagne flutes, a chrome gazing ball, horses from the Hyatt Regency Tamaya stables, and the photographers made up one of the most beautiful weddings to be shot in the desert.

The love affair that was ‘lit’ on the dating platform Tinder during the height of the COVID-19 pandemic, saw Veronica not only become a wife but taking on her wife’s surname. Bridgette, who knew her preference was for women as early as her days at a student at Mount Alvernia High School in Montego Bay, said she opted not to have a traditional wedding. In fact, their wedding was super private. “I felt like it was the best thing for us, because I didn’t want to celebrate a truly life-changing event or moment and, in the back of my head, thinking about what other people are thinking in their minds in terms of the LGBT culture,” she shared.

Accepting Veronica’s proposal was a no-brainer because of how attentive, caring, patient she is. Bridgette says her super supportive partner has exemplary communications skills. The two women reside in different states and see each other once or twice per month, but Bridgette says if her head hurts, her wife is on the next plane.

The couple has also proven that opposites attract, as Bridgette is very quiet, while Veronica says she is loud, with a motto that says ‘go big or go home’. “I really like to be over the top, that’s my personality, and I like everything I do romantically to be an extension of my personality.”

She quickly points out that her queen must have no doubts whatsoever about how she feels about her. Everything she does, she says, is a grand gesture, which come from the heart of an artist.

For instance, Veronica brought 50,000 rose petals for the proposal and for the wedding, and the décor took it up several decibels, transforming the destination’s aesthetics, with the entire process pretty much under her control. “I really wanted to do the southwestern desert image,” she tells Island Wedding. “I went for somewhat of a Boho sci-fi, so there was a lot of chrome and a lot of silver in our accents, and I wanted the dresses to reflect that.”

Owing to the fact that they are a non-traditional couple, they preferred to stay away from the white wedding dress, so they did nudes. Veronica wore a custom-made, mesh dress embellished with appliqués and a high split, while her wife donned a straightforward piece. “I had an idea that I really wanted to see her in a jumpsuit with a very long train, so I just kinda played around with it.”

Bridgette wore a southern cowgirl-style dress, with high cowboy boots accented with turquoise for their second piece, and Veronica wore a suit.

In keeping with the earth tones, even Veronica’s sister’s outfit was in sync with New Mexican nature. The sand, dirt, rocks, and dust were all complemented by flowers everywhere.

The couple says they never felt they would ever find this type of love in their lifetime “Because of my personality and because of my eccentricity, but I also kind of felt like I didn’t deserve this type of love,” Veronica revealed. At the same time, Bridgette added that the relationship had taught her that having found the right person, the love will take the relationship to higher places.

“It will elevate your best self.”

Veronica says her wife brings out the best in her. “She makes me a better person, a better partner, a better sister, a better daughter. She gives me everything that I am not, you know; that’s why we work, because we pour into each other.”

Others had doubts about the chemistry between the two women when they just started dating, but they both speak of how good they have been to each other.

“I am super ready for this. I am mellow; I am ‘Mildchild’ now. I love to call her my wife,” said Veronica, the woman who goes by the moniker ‘Wildchild’.

The couple honeymooned in the Philippines for close to two weeks on one of the most adventurous and exciting trips they have ever taken together.