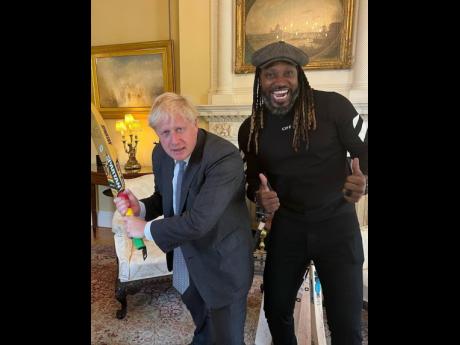 Gayle, who is an ambassador for Jamaica, shared that the conversation was “very good”.

“We had a discussion about Jamaica's Independence in August. We are trying to get them to partner with us in a cricket game on August 6 at Treasure Beach. That's the one Jason Henzell controls, so he played a part. We are seeking sponsorship from the UK government to help us to uplift the game, or some assistance with getting equipment for Jamaica. They are very keen to come visit Jamaica, so it would be nice to have them here in Jamaica for our Independence. We discussed a bit of cricket as well, because they love their cricket and we also discussed the tourism side of things, and music as well. We joked about that, but we didn't get so much into the details about the music side of things,” Gayle told The Gleaner.

And Gayle did go to No. 10 bearing gifts – cricket bats, of course. He told The Gleaner that Johnson was elated to receive a cricket bat.

“Prime Minister Boris Johnson is definitely a cricket fan. The moment I handed him that cricket bat he started to swing immediately and he was enjoying himself. He actually mentioned a story about facing Courtney Walsh as well in some charity game in which he smashed about 20 or 30-odd [runs]. He is definitely a cricket fan and he is one of Universe Boss fans now,” Gayle, whose moniker is Universe Boss, said with a laugh.

The well-travelled batsman admitted that it was a pleasure to visit with Johnson at his Downing Street residence.

“That's the most famous street in England. I had a lovely conversation and I had a lovely cup of coffee as well. That can be a tick for the Universe Boss visiting the British prime minister,” Gayle said.

He also gave an insight into what it means to be an ambassador, especially one who now represents in both sport and music.

“It's a great feeling when you can have an impact on other people around the world and highlight Jamaica as much as I do in the sporting department; it is really fantastic. I'm really grateful to be an ambassador for my country. I love Jamaica so much and wherever I travel in the world I always highlight my country. Jamaica to the world. With the sports and music combined together, it is a privilege and I am glad that I am one of those persons who do it in both departments.”

And while Gayle didn't perform a song for Johnson, he didn't rule it out.

“It was totally a different occasion, but in the future, you never know what can happen. Maybe on a different platform you will have the Universe Boss performing for the PM himself ... and yuh know what? I'll rip it up. Yeah, let's see,” he added spiritedly.