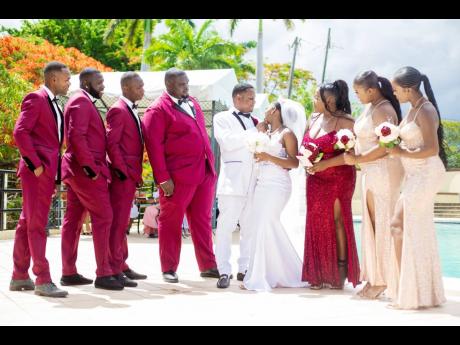 Contributed
Meet the Warrens and their bridal party. 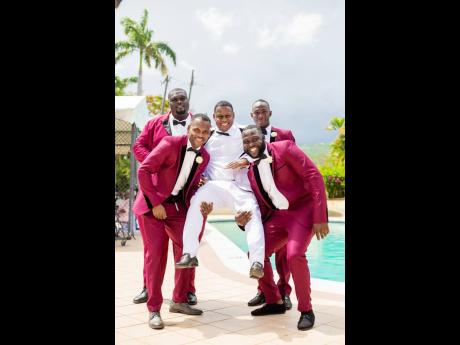 Contributed
No longer a bachelor, the groomsmen were happy to support their brother in life on his wedding day. From left: (back row) Ruel Hamilton and Fabian Prince, along with (front row) Danardo Ellis and Conrod Roberts carry their groom to victory. 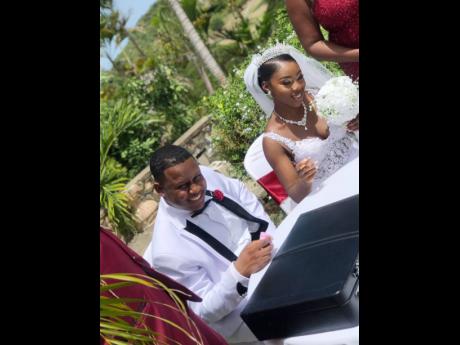 Contributed
The Warrens pause for a picture perfect moment during the signing. 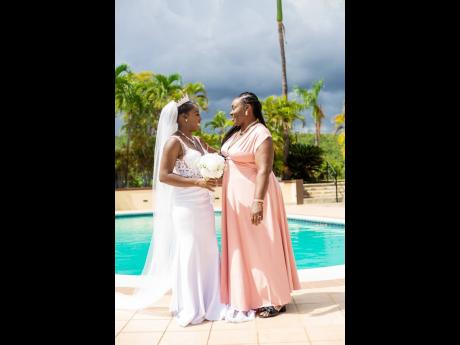 Contributed
There’s nothing like a mother’s love. The bride shares a priceless moment with her mother, Julia Harze. 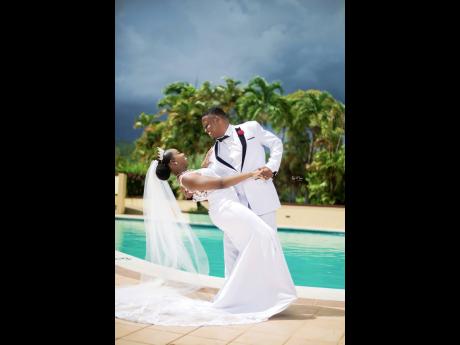 Contributed
Princess is happy to have found her prince charming in Michael. 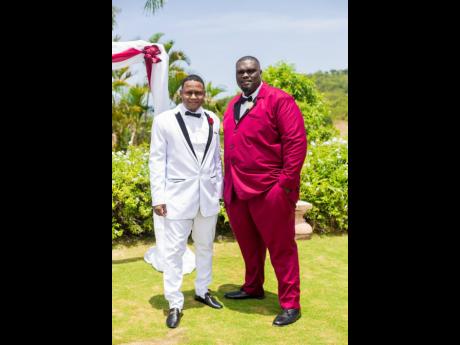 Contributed
Ruel Hamilton (right), was honoured to stand in the role of best man for the groom. 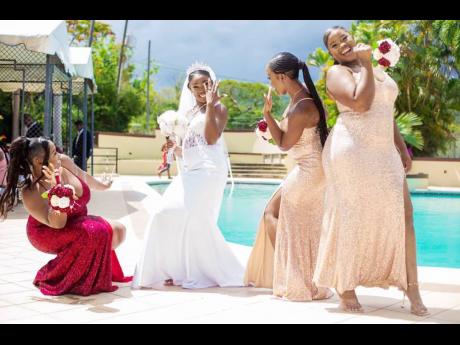 Contributed
Wife moves: The bride, Princess (second left), shows off her wedding ring with her girls (from left) maid of honour and sister, Cavel Morrison, and bridesmaids, Shannon Thorpe and Shara Montaque. 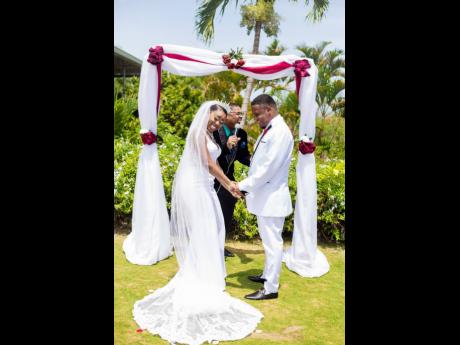 Contributed
Hand in hand, heart to heart, Princess and Michael went from Facebook friends to newlyweds. 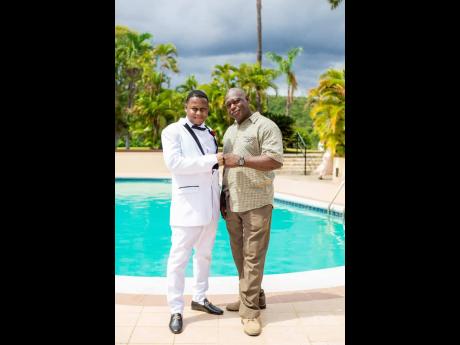 Contributed
Father of the groom, Anthony Warren (right), will always remember the day his son married the love of his life. 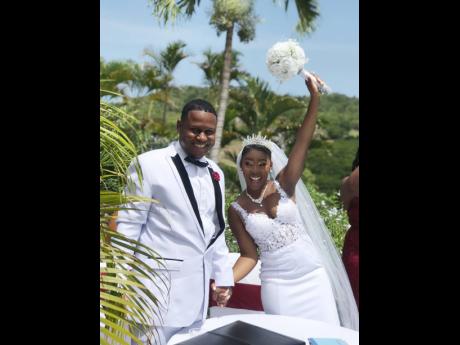 First comes like, then comes love. At least that’s the case for Princess Morgan and Michael Warren.

Long before social media ruled the dating scene, Princess and Michael made a connection via Facebook. According to Michael, Princess made the first move when she liked his photo. That gave him all the reason to make a smooth counter-play to claim his queen.

“I liked and commented on his picture on Facebook in 2014. He said it was an indication for him to message me because that was me making a move on him,” Princess told Island Wedding with a laugh. “That wasn’t it, though, but the picture was nice,” she added.

For Michael, indicators don’t lie. They’re a signal of someone making a move, and considering that they had mutual friends on the social media site, he decided to inbox her. Communication ensued, and both being single at the time, one thing led to another. “She has always been a simple and superb woman. The way she loves God and is always talking about God was just one of the things that drew me closer to her,” he shared.

As he got to know her better, he was enthralled by her loving, caring, determined, and supportive nature. “Princess is definitely a go-getter. She doesn’t wait on opportunities; she goes for them or creates them. She takes care of me and our daughter. She has been a wife all her life. Why wouldn’t I want to marry her? One thing I can say is whatever situation she’s in, she’ll run to God first no matter how small it is.” Moving gestures like praying over him daily continue to keep him going.

Princess describes her husband as responsible, loving, understanding, determined, and romantic. “The love he has for me is definitely unconditional. Michael is a supersmart young man who pushes me to always go for what I want. He always encourages me to stay focused on God because whatever I ask of God, it’s always granted. It’s always me and Chelsea’s well-being first. He thinks about our daughter before anything else. I can talk to him about anything at any time. He’s not the person to say I can’t; it’s I can and I will,” she highlighted.

Noting that they were always meant to be, the couple made beautiful memories together. When they weren’t busy having quality family time, they would go out on dates. “We’re big on family, so being home with our Chelsea is always a first choice. But when we go out, we honour our first-date memory by going to M10.”

After being together for seven years, Michael asked Princess, the love of his life, to be his wife. “It was supposed to be for our seventh anniversary, but she was being noisy, so I changed it to her birthday. I booked the hotel, [and my] legs started shaking, but I was determined and ready to take the next step. In the evening, we went to dinner. She was very beautiful that night. I was, like, ‘Yes, it’s time’. The restaurant manager took the ring and first came in singing the birthday song with a few of his staff. After blowing out the candle, he started to sing something like, ‘What are you doing this Sunday? He wants to marry you’. It was on a Sunday, so that was good. When he stopped singing, I went down on my knees, and even before I finished, she already said yes.”

It was everything she [had] ever hoped for. “Michael is a bit shy, and to see him going down on his knees asking me to marry him, I had to say yes. It was just amazing. I had tears of joy all night,” she recounted.

Princess enlisted the expertise of her friend, Shara Montaque, to help her plan the wedding. The Bridal Palace Boutique jumped right into action, sorting through online orders, the bouquet, the veil, and the earrings and accessories.

On July 22, Michael and Princess tied the knot in a beautiful wedding ceremony at Caymanas Golf Club in St Catherine. The bride was breathtaking in a beautiful white dress with lace details. Her prince charming greeted her in an all-white suit, boasting pops of black.

While the bride confessed that every moment was the best in her eyes, when her groom began declaring his love for her, she broke down in tears, “When Michael started telling me how much I’m loved by him, that’s when I started crying because he definitely played a number on me.”

Their first dance as husband and wife to Shania Twain’s You’re Still the One was one of pure joy, happiness, and love.

As for the groom, it was all about the love for him. “The wedding was filled with a lot of love from supportive family members and friends alongside our family. The best moment was turning around [and] seeing my beautiful queen with the perfect smile. Now I’m married to the full package,” he added.