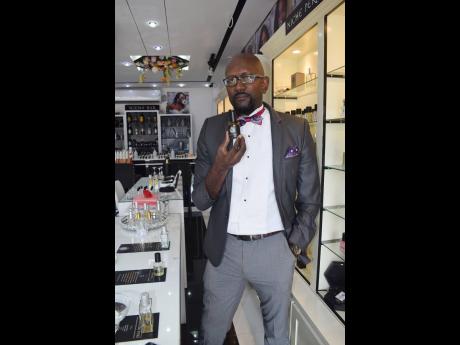 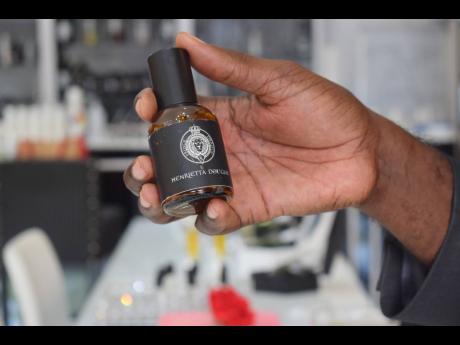 Krysta Anderson
Bruce created a scent to honour the legacy of his mother, Henrietta Douglas. 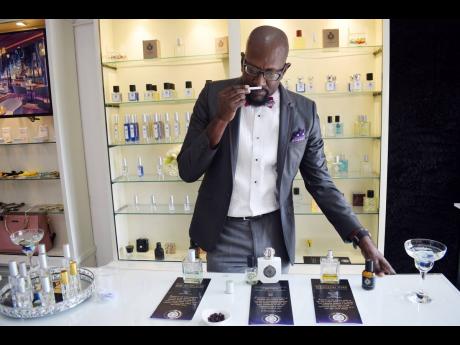 Krysta Anderson
Bruce, who has a nose for notes, will take you through the perfume making process, formulating a scent that is ideal for you. 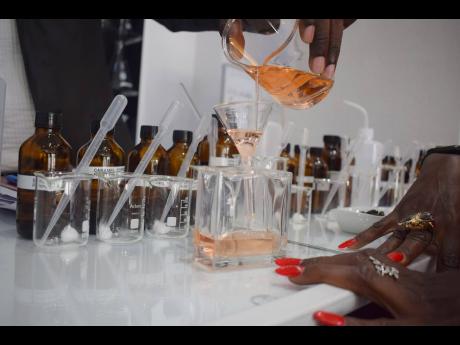 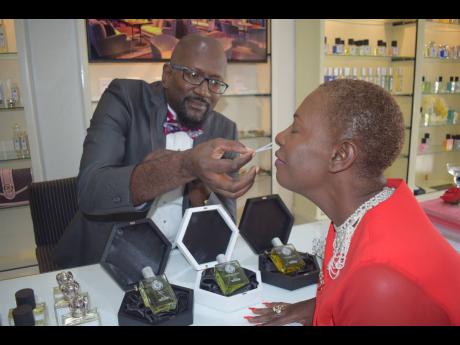 Krysta Anderson
The chemist and Debita White work out a winning formula for her new perfume. The creation process begins with identifying notes that speaks to you, your style, personality and memories. 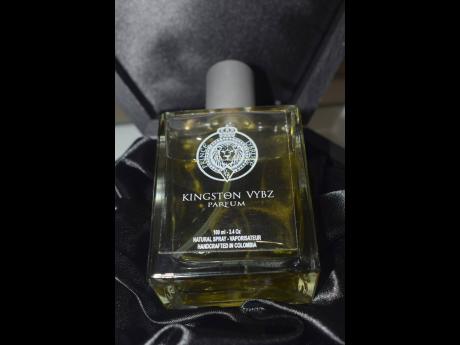 If a good fragrance is synonymous with being a powerful cocktail of memories and emotions, then consider Edwin Bruce, the king of scents.

“Perfumes are an opportunity to have the best form of deja vu. You will remember your grandmother’s cooking or other memories from your early childhood. And sometimes those are our happiest moments. I’ve seen where clients are taken back to such intimacy that they just want to stay in the space for a while or capture that scent so that they can experience it again and again,” Bruce recounted.

Prince D’Bruce, a customised fragrance perfumery, is the manifestation of a long-held dream for Bruce.

“It took me five years to get the dream up and running, from conceptualisation to fruition. Once you come [into the store], I not only want you to escape into an olfactory world, but into a world of beauty, relaxation and a world that speaks to the best version of yourself,” he said.

Initially, he intended to create products that would emanate the vibe of Jamaica. That gave birth to scents such as Kingston Vybz, Blu Mountain with the coffee note, Irie and Yeh Man and Ah Ya Suh Nice. “For the ladies, there is a very vibrant, sweet and sensual scent that we named Dolly,” he added. But instead, he expanded his dream and his offerings. When asked how he became this local ‘scentsation’, Bruce said that he didn’t choose scents; scents chose him. To commemorate his life-changing career path, he dedicated his first-ever perfume to his calling, naming the scent Chosen.

“Growing up, the trajectory was to become a pastor. I went into [the] church in high school and went to bible college. But all this time, my mom used to sell fruits, finding particular fruits for the seasons. Whatever was not sold would be taken back home to that small space, so I was constantly smelling fruits and seasonings and becoming so familiar with scents,” he revealed. Doing agriculture at the secondary level also exposed him to an array of scents. He, however, had never heard of a perfumer in Jamaica before.

“In Jamaica, we import branded scents. And we were told that men wear cologne and women wear perfume. And there’s no truth to that. It is only differentiated by the concentration.” After going in one direction as a missionary, he was chosen to go another route.

On the road to becoming a master perfumer, Bruce got a job in New York labelling perfumes. The person assigned to the task would often be out, so it was left up to him to get the job done. There, he discovered he had a nose for the art form. “Though you may have an extensive background in chemistry, if you’re not able to distinguish scents readily, then you won’t make a great perfumer,” he declared.

Armed with the knowledge of the nose, he went on to do studies in Birmingham, England and received certification in Colombia, studying with master perfumer Mario Galindo. He had plans to start his own line of perfumes and open his stores in Europe. His mother, however, thought it best to take the expertise and his brand home. And that gave birth to Prince D’Bruce.

Just before he officially opened his doors, his beloved mother passed away. In his tribute, instead of the usual memorial buttons, he decided to create a scent that honoured her and her legacy. Family members, friends and well-wishers adored the sweet sentiment. Since then, he has been customising scents for every occasion; birthdays, weddings and anniversaries.

Clients are asked to fill out a form including scent preferences and allergies. But he encourages those interested to expand their own note profile and be open to new, exciting and awakening ingredients that speak to their aura, style and personality. A custom scent cooked up in the chemist’s lab in store can take under an hour to make. And it’s a collaborative process, where you are the determining factor of your scent. The brand’s signature perfumes are also available in-store.

Additionally, Bruce’s fragrances aren’t limited to perfumes. They are also infused into candles. There is a line of scrubs suitable for the face and body, body splashes, different scented lotions and body butters, ranging from caramel crunch and baby powder to vanilla. For men, there are beard balms and beard oils. And he could not leave out massage oils, ideal for therapeutic or romantic circumstances.

When asked about the future, the perfumer told Living that he hopes to become the go-to ‘scentsation’ locally and hopefully overseas.