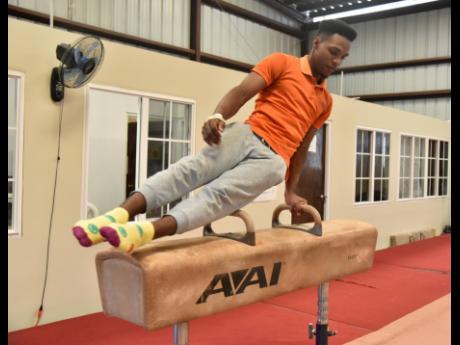 Kenyon Hemans
Williams in action on a pommel horse. 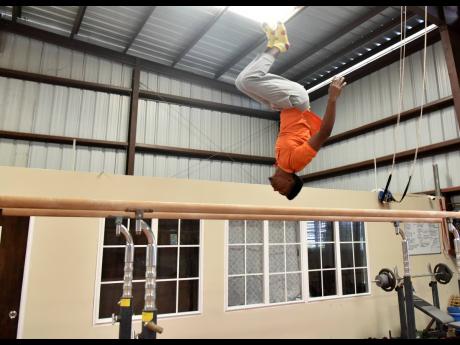 Kenyon Hemans
Flipping midair in a dismount from the rings, the student-turn-athlete, and then coach, is happy to pay it forward by passing on the knowledge to his class. 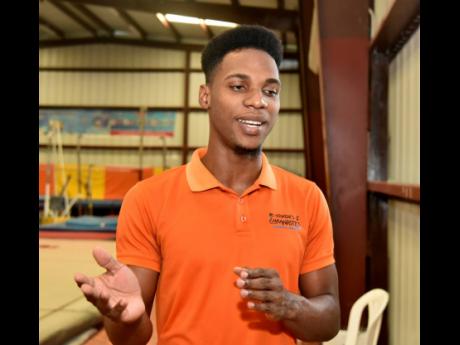 Kenyon Hemans
Williams explains how he went from athlete to coach during his recent interview with The Gleaner. 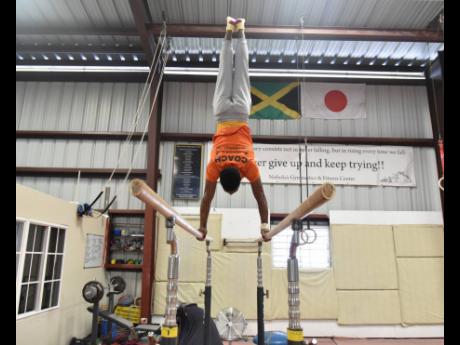 You hear the terms ‘jumping off the beam’, ‘working the floor’, and ‘flipping off the bars’ and think, ‘There’s no way that I can fulfil my dreams of doing gymnastics as an adult.’ Well, we are here to tell you that nothing is impossible.

The Gleaner Lifestyle team visited the home of Nishida’s Gymnastics, where the sport is taught recreationally to adults. Located on Shortwood Road in Kingston, with other branches on Hope Road, in Clarendon, Manchester, and St James, the academy is home to some of the best gymnasts in Jamaica. While the focus is traditionally evident on honing the skills of the youth, the gym also offers adult classes for beginners.

“We teach three days per week: Mondays, Wednesdays and Saturdays, in the evening. During the hour-and-a-half class, we do a lot of conditioning exercises. By that I mean, focusing on the core and building strength in both the legs and the arms. If we’re trying to do skills on the bars, we have to go through this stage first. We usually warm up first and go on the trampoline as well, then conditioning, then the events,” Daniel Williams, a trainer at the academy, explained.

These events include floor, vault and bars. But they’ve broken away from the gender stereotype to teach male events, such as parallel bars and the rings. “We’re not trying to limit you. We try to make it fun and get you to experience as much as possible,” he said. The adult class is taught similarly to the preschoolers and the juniors.

So what are some of the benefits of doing gymnastics? According to Williams, it helps to keep you in shape, builds reflexes, assists the coordination of the body, increases flexibility, and improves your strength (both mentally and physically) as well as your focus. Additionally, it makes you a more disciplined individual, because you have to be committed to the cause, and the sport also boosts your confidence level.

Coming from humble beginnings, Williams didn’t see himself pursuing the sport, let alone becoming a coach. But Japanese coach Shin Nishida thought differently, inviting the youngster to train his way into becoming a gymnast. “I started gymnastics in 2005 and retired in 2019, so I did it for 13 years,” he revealed.

Williams shared that he began emulating his father, who was into gymnastics as well. Seeing the interest his son had, the father began a new bonding experience, teaching his son all that he knew. He was then introduced to Nishida by the time he got to New Day Primary School.

“He (Nishida) showed us a few moves and we did what he told us to do. Fortunately, I got picked; he gave me a letter, I gave it to my dad, and that’s where the journey got started,” reminisced Williams on being eight years old at the time.

The journey presented its fair share of ups and downs, but it was exciting overall, since it took him to places that he never thought, or dreamed, of going. As he got older, he went to the bigger competitions and the bigger games. Before he knew it, this student was training his way to represent the country at the professional level.

“I dreamed about going to big games. Due to a back injury, I wasn’t able to participate during my prime in 2015. But I gave it a shot in 2017, entering the World Artistic Gymnastics Championships in Montreal, Quebec, Canada. With only two weeks to train prior, I performed decently. I could’ve performed better, but I am grateful for the opportunity,” he shared, adding, “It’s just the way of the sport; some make it, some don’t. I’m glad that I went and represented my country.”

With the competitive dream now realised, the athlete went from one window of opportunity to another, placing himself in the position to embark on new goals. He transitioned into becoming a coach the same year of his major competition. The aim was to remain in and out of training, doing his best to balance being a full-time coach and a full-time athlete.

This, however, proved to be a difficult feat, and with the injury becoming a looming problem, he shifted his focus primarily to coaching. Since then, he has brought this tenacity and resilience to his training and has thoroughly enjoyed the teaching experience. “It has been fun. The best part is that I get to experience things that my coach did, transforming lives in the way he transformed my life. I just really want to give back to all of my students.”

Gymnastics is definitely worth a try: you have nothing to lose and a host of health benefits to gain.