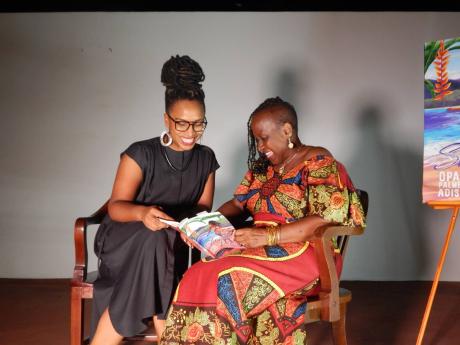 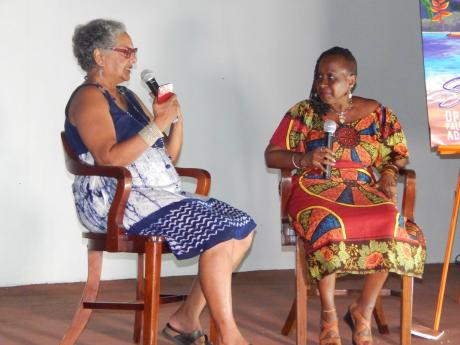 Opal Palmer Adisa is one of the busiest people in Jamaica. The titles attached to her name – professor, poet, cultural activist, feminist, and award-winner many times over – indicate some of her activities.

They were used last week by a woman who might have applied them to herself – Dr Isis Semaj-Hall, lecturer at The University of the West Indies. The occasion, the launch of Palmer Adisa’s most recent book, The Storyteller’s Return: Story Poems, was further evidence of her jampacked life.

It was her third major publication in about a year. The others were Portia’s Dream, the authorised children’s biography of Portia Simpson Miller, Jamaica’s first female prime minister; and 100+ Voices for Miss Lou, an anthology of poetry, tributes, interviews and essays on Dr Louise Bennett Coverley, which Palmer Adisa edited.

Add to all that this promise found on the last page of her previous book: “Look out for my next poetic prose collection entitled my body in the land of xaymaca, which is scheduled to come out next year. Did a reader just exclaim, “Over-achiever!”?

At the launch, held at 10A West King’s House Road, Dr Semaj-Hall, in introducing Palmer Adisa, gave the audience a strong sense of the book’s ethos when she spoke of the author’s “ability to listen not just to voice, but also to home, to land, to experience, to taste, to joy”.

She added, “This ability to listen deeply to all of these inputs seems to guide her hand, allowing her to create, if not act, as the drum or vessel through which her foremothers and forefathers can speak truth audibly, palpably into the now.”

To much laughter, Dr Semaj-Hall referred to one poem in which the poet speaks proudly of how she beheaded her blonde doll, cut off its hair, pulled out its arms and legs and tossed the pieces between the hedge and the barbed wire fence, asserting that she wasn’t interested in “playing house or practising walking lady-like”. Instead, she wanted to lie on her back and have the sun burnish her skin.

Dr Semaj-Hall then commented: “How skilfully Opal tackles the oppressiveness of race and gender. How deftly she writes a persona, who can stand up for herself and stand in her own pride, all while lying in the grass and dreaming.”

After remarks by Christine Randle, managing director of the book’s publisher, Ian Randle Publishers, and readings and a musical interlude, the audience listened in on a conversation between Palmer Adisa and journalist/social commentator Annie Paul. (She was a last-minute stand-in for Professor Kwame Dawes, who sent apologies that he was unable to make it to Jamaica as had been planned.)

The wide-ranging conversation covered subjects like why Palmer Adisa left Jamaica in 1980 (it was because she wanted to write and the UWI didn’t offer a master’s in creative writing), her further studies, her marriage, children, divorce and various stints at teaching abroad. She also spoke of having no regrets about returning home after 25 years. As indicated, she has been very busy.

She lists herself as a consultant gender specialist, cultural activist, author, speaker and the former director of The Institute for Gender and Development Studies, UWI.